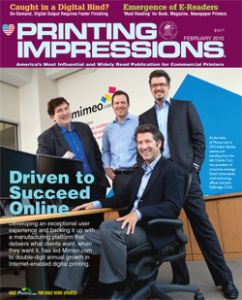 Transcontinental has made a concerted effort to automate operations for several years now, originally with the use of scripts and hot folders to automate specific tasks.

Binding and finishing company news for Febuary 2010, including items on Binding Industries of America and FetterGroup.

Cenveo Shuts Down Trio of Plants

One's ability to skillfully maneuver digitally printed product through the binding and finishing process just may enable you to avoid a nasty kick in the pants as the completed job heads out the door.

Mimeo.com went from being a business model on paper to an online print provider with more than 450 employees and nearly 300,000 square feet of manufacturing space spread across three strategically located production facilities.

It seems that no matter how long a book is checked out from the public library, it will eventually return. But, we may have found the record for the most overdue tome in the history of libraries.

There is now a multitude of e-readers for book, magazine and newspaper digital content, ranging in price from $199 to $800 and above.

In addition to waterless printing, MOSAIC also offers traditional offset, UV and digital printing to the four vertical markets it serves: creative agencies/designers, corporations, as well as the membership market and government.

Green printing and environmental efforts in the commercial printing industry, including items on Intech Printing and the Sustainable Forestry Initiative.

Tankers Limited e-mailed a quote back to the printer with various shipping options, noting that its policy was to receive payment from the location of pickup only.

The combined company boasts aggregate sales of $5.1 billion for the fiscal year ending Sept. 30, 2009. Together, the firm will have nearly 30,000 employees, though that figure is expected to decline during the integration process.

As companies reshape their marketing strategies to embrace newer media—at the expense of print—their need for employees who only specialize in sourcing print will shrink.

The e-mail headline read, "Special Announcement from Michael Makin." It said, "Dear Printing Industries of America Member: As you are aware, printed products are being criticized more and more for their impact on the environment—and unjustifiably so."

The Laws of Justification

One misconception in some circles is that trade binderies have outlived their usefulness, that the current progression is toward full-service print shops assembling their own comprehensive binding and finishing operations.

Experts have indicated that it can cost as much as five to eight times more to acquire a new customer than to retain and grow an existing one.

Vertis Communications closed its Manchester Township, PA, facility on Jan. 15, catching many of the 180 people who lost their jobs completely off guard.