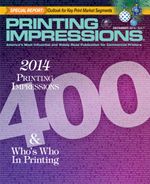 If the 2014 campaign taught us anything, it's not to underestimate the value of a good education. And, from the book manufacturing point of view, the clamoring of presses could only mean one thing: Adoption cycles are back in full force. Most segments served by Chicago-based RR Donnelley enjoyed moderate to strong performances across the board in 2014.

Patrick Donahoe, the Postmaster General and CEO of the U.S. Postal Service (USPS), will end his 39-year career when he retires on Feb. 1, 2015. He will be replaced by Megan Brennan, current COO of the USPS, and the first woman to hold the office.

If catalogers and magazine publishers were looking for the right mix in 2013, their main challenge in 2014 was ensuring a seamless integration between print and the Web. As a result, more and more catalog and publication printers are changing their focus from solely providing ink-on-paper products to becoming true multi-channel partners.

When the U.S. economy exploded on the launching pad in the first quarter of 2014, the printing industry followed suit with printing shipments slipping 4.7 compared to the same period in 2013, according to the U.S. Census Bureau. While there was improvement, the Q1 misfire for the Gross Domestic Product (GDP) set the stage for an overall 2 percent bump for the year as a whole.

The typical landscape for U.S. printing industry trade shows today is dotted with smaller booths, fewer attendees and less equipment on display. But that wasn't the case at the recent 2014 SGIA Expo held at the Las Vegas Convention Center October 22-24. SGIA set not one, but two, new records: largest attended SGIA Expo ever, with 25,500 registered attendees; and most exhibitors, with 541 exhibitors filling 223,000 square feet of floor space.

The good news? There are no price increases on tap for January. The bad news? Not much else has changed. The opportunity? Align yourself even more effectively with direct marketing clientele, using a multitude of integrated channels, to keep direct mail fresh, vibrant and relevant. And we have three of the nation's top print producers of direct mail to elaborate on the subject.

An investment of $15.9 million will be made to maintain and expand the digital printing volume at RR Donnelley's book manufacturing operations in Crawfordsville, IN. The improvements will add at least 16 jobs over the next few years, reported the Journal Review.

Fast-Track Firms of 2014: A Look at 4over, Kirkwood Printing and Tukaiz

The most successful printers don't refer to the weather forecast when assessing their next move; they plunge head-first into a scenario that has the potential to be parlayed into handsome profits. We've got three success examples for your consideration—firms that have enjoyed immense success even as the economy provides little to no optimism for the immediate future of print.

Money: Easier to Get for Printing Companies as Financing Picture is Brighter

More borrowing options exist now than was the case a few years ago. The best way to connect with them is to get expert advice from a source that knows the printing industry and its financing requirements. A qualified advisor can vet private equity lenders, streamline dealings with banks and generally make capital for equipment purchase or business acquisition more accessible. That way, you'll leave no money on tables you may not even have known were there.

Printing Industries of America (PIA) announced the recipients of its 2014 Best Workplace in the Americas awards. A total of 28 graphic arts companies, both members through PIA affiliate organizations and non-members, were selected by a committee of industry HR experts.

The parent company of Vistaprint and other Web-to-print brands has changed its name to Cimpress N.V. It plans to invest hundreds of millions of dollars over the next five years to develop proprietary software and production technology, in order to evolve its operational capabilities into a shared mass-customization platform (MCP).

Seven Steps to Identify, Attack and Dominate a Vertical Market

Regardless of whether you choose to concentrate in manufacturing, pharmaceuticals, cosmetics, food, insurance, gaming, financial services or any other vertical, be confident that, when it comes to creating real domain expertise, less is truly more. Here are seven helpful steps from Bill and T.J. to attack a vertical market.

Now in its 31st Year, the Printing Impressions 400 provides the industry’s most comprehensive listing of the leading printing companies in the United States and Canada ranked by annual sales volume.

Why This Is the List That Keeps Giving—Mark Michelson

Compiled annually for the past 31 years—and arguably the only list of its type for the commercial printing industry—our latest Printing Impressions 400 ranking of the top printers in the United States and Canada is featured in a special pullout insert bound in this issue. I’m always amazed how far the tentacles of the PI 400 reach—from print buyers and specifiers, to Wall Street analysts, M&A specialists and private equity investment firms, to industry suppliers analyzing their market shares.