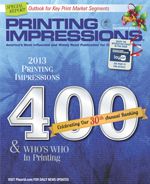 If you know the name of a printing company that you think appears on the 2013 Printing Impressions 400 list, but you’re not sure of its ranking, here’s an easy way to locate that firm or determine whether it’s included on the list at all.

Plain speaking and easy going, a half-hour phone call from Harris would seem to last just a few minutes. He loved the printing industry and enjoyed talking about mergers and acquisitions. The stories were legendary, the type of stuff that can't be shared with a trade pub audience. Endlessly fascinating.

Printed books are not exactly bound for life support systems. Printers have done a phenomenal job of positioning themselves to serve the changing needs of their publisher clients, from offering print-on-demand (POD) solutions and reducing inventory to providing drop-ship services that eliminate distribution hubs. The successful book manufacturer can provide multiple formats for publishers, help control their costs and reduce turnaround time.

Catalog/Publication Outlook : Preserving a Strong Base

Catalogers and magazine publishers in 2013 faced many of the same challenges as the prior year of finding the right mix of media to deliver information and build their brands. In addition, economic uncertainty and pending postal increases were thrown into the pot to create a stew of questions.

The economy is largely on its own. It is still recovering very slowly, and the final numbers for 2013 should see it posting less than 2 percent Gross Domestic Product (GDP) growth, notes Dr. Ronnie Davis, senior vice president and chief economist at Printing Industries of America (PIA). From a 2014 standpoint, Davis is a bit more optimistic, projecting 2.5 percent growth for the U.S. economy.

The U.S. Postal Service (USPS) is certainly not doing the direct mail space any favors, requesting an exigent rate increase of 4.3 percent. With postage taking up the better part of 60 percent from the direct mail marketing spend, there's less and less meat on the bone. But the USPS has its own problems, and thus far nothing Postmaster Patrick Donahoe has done could spur Congress into addressing the issue of postal reform.

Print salespeople could learn a thing or two from Santa Claus. Efficiency and call volume matter, but so does the quality of your calls. If Santa can deliver nearly 400 million presents in one night, you can narrow the gap between how many calls you need to make and how many you do.

The industry continues to shrink, as evidenced by a brisk 2013 transaction season, capped by the jaw-dropping pickup of Consolidated Graphics by RR Donnelley. And while it was by far and away the biggest deal in '13, a glimpse at the PI 400 can provide further evidence of a shrinking market.

Printing Industries of America (PIA) has announced the recipients of the 2013 Best Workplace in the Americas Awards. Entries are judged on the following criteria: management practices, work environment, training and development, recognition and rewards, workplace health and safety, health and wellness, financial security and work-life balance.

Now in its 30th year, the Printing Impressions 400 provides the industry’s most comprehensive ranking of the leading printing companies in the United States and Canada. The listings include company name and headquarters location; parent company, if applicable; current and previous year’s rankings; most recent and previous year’s fiscal sales; percentage change; primary specialties; principal officer(s); as well as number of employees, manufacturing plants and printing processes and capabilities.

This issue marks the 30th annual Printing Impressions 400 listing of the largest printing companies in the United States and Canada, as ranked by annual sales. It’s a milestone that shouldn’t be taken lightly, given all the upheaval within the commercial printing industry and the publications that once covered it. Kudos to the 400 companies appearing on our 2013 rankings.