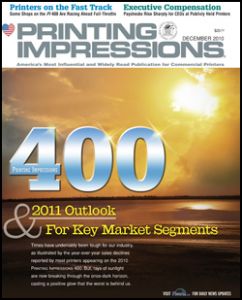 One of the biggest questions heading into 2011: Has the e-reader market peaked, having now been embraced by the most ardent bibliophiles, or is there reason to believe more market share can be cannibalized? Further, whither the future of the educational sector and its possible adoption of e-readers in lieu of textbooks?

Tzvi Erez, owner of bankrupt print brokerage E Graphix and the man accused of defrauding 70 investors of $27 million through expertly forged documents in a Ponzi scheme, will not face prosecution in Canada, according to CBC News. The Ontario Crown Attorney's Office withdrew charges, in part, because the court says it lacks the resources to go after Erez.

While many magazine and catalog printers have reported some improvement in their sectors since 2009, economic and industry uncertainty still carried its weight into 2010. Reduction in advertising pages, a migration to digital alternatives, and the rising cost of postage and paper have remained key issues.

Consolidated Graphics, the world's largest user of HP Indigo presses, has purchased five HP Indigo 7500 digital presses. Three are being installed at PBM Graphics, another at CDS Publications and a fifth is bound for the company's European digital hub in the Czech Republic.

It is not surprising to note that much of the commercial printing industry news in 2010 was dominated by the continuing struggle of printers trying to reconcile employee ranks with dwindling press hours. White-collar crime was rampant and, in some instances, theft indirectly led to closures.

With the dawning of 2011 on the horizon, the business outlook had already turned brighter, even before the outcome of the November elections buoyed the spirits of the business community. "The bias of the U.S. economy is that it wants to grow," observes Ron Davis, Ph.D., and Printing Industries of America's (PIA) chief economist and vice president.

Good news was difficult to find in 2010 for the printers of direct mail, not to mention the direct marketing community. Even the United States Postal Service (USPS) struggled in its continuing efforts to offset dwindling volume and out-of-control costs, having seen its request for an exigent price increase denied in late September by the Postal Regulatory Commission.

With publicly held companies on the 2010 Printing Impressions 400 reporting sales declines for their most recently completed fiscal years, pay levels for the principal officers at these large firms didn't necessarily follow suit. For most of the executives appearing here, their overall salaries were up significantly.

Fast-Track Firms : Success Amid the Mess

The following printing company profiles underscore the notion that there is hope for the industry and a clear vision toward success—and prosperity—for those firms unafraid to plan for success in an environment that calls for fear and inactivity. These three profiles offer more than a little hope that 2011 could mark a return to the "old normal" for companies daring enough to defy the economy.

Printers are (and always were) print buyers' primary sources of education. That's not going to change—and isn't it good news for printers? Just knowing that customers depend on you to bring them information to help them do their jobs better should get your creative juices jumping.

It’s Time for an Intervention —Farquharson/Tedesco

Good morning and thanks for coming by on such short notice. We've been speaking to a great number of printing salespeople and selling owners and, well, quite frankly they are not happy about a few things. We felt it best if we addressed them directly with you.

Quad/Graphics took its minority interest in HGI Co. a step further by acquiring the Burlington, WI-based company less than a year after the two firms had established a partnership. HGI is a full-service commercial and specialty products printer. The acquisition is said to bring together HGI's expertise in the commercial and specialty products segments with Quad/Graphics' technology and innovation to provide quick turn, customized and value-added solutions on a global scale.

I love this time of year because my mailbox is stuffed with lots of printed material. Good stuff like catalogs from Land's End, Tattoo World, Column Writers' Fashions and Victoria's Secret. All of the Christmas-related, printed material warms my heart. It's refreshing after being forced to watch all those TV political cartoons—er, I meant to say political "commercials" where I learned absolutely nothing about why any candidate deserved my vote.

That Trusted Employee May Be Ripping You Off —Michelson

As 2010 draws to a close, it's the perfect time to reflect on our many blessings. Some printers, though, won't be ringing in the new year with the typical holiday cheer. That's because their businesses suffered losses, and in some cases their demise, at the hands of "trusted" employees who embezzled large sums of money.

Now in its 27th year, the Printing Impressions 400 provides the industry's most comprehensive ranking of the leading printing companies in the United States and Canada. The listings include company name and headquarters location; parent company, if applicable; current and previous year’s rankings; most recent and previous year’s fiscal sales; percentage change; primary specialties; principal officer(s); as well as number of employees, manufacturing plants and total press units.

It is that time of year once again when we disregard our own troubles and stop to consider those poor souls who are far less fortunate than us. In turn, we can be grateful for the blessings we do have in our lives while reaching out to make someone's darker days a little brighter.

Printing Impressions launched a daily e-newsletter—Today on PIworld—as a way
to make it effortless for graphic arts professionals to remain current on the latest industry information, ideas and expert advice by bringing the content right to a subscriber’s e-mail in box. Presented here is a sampling of the most-read news, aggregated content and blog items from recent editions.