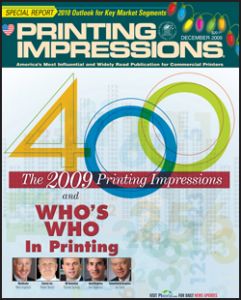 Amidst the rising cost of postal rates and major cutbacks, publishers and catalogers have been forced to reevaluate their marketing and business strategies. Companies in both sectors looked at cost reduction, how to gain stronger customer loyalty and better ROIs, as well as adopting multi-channel strategies.

We have assembled a trio of printer profiles detailing the positive year-over-year growth enjoyed by these establishments. They're living proof that, no matter how tough times can get, there are always those companies who can see their way clear to prosperity.

Canon has agreed to acquire 100 percent of the outstanding shares of Océ for euro 8.60 per share cash, or euro 730 million (US $1.1 billion), in a fully self-funded transaction.

More than 150 "printers" and industry vendors recently attended the Printing Industries of America's 2009 Converge Conference. "The next generation of print and communication services" was the tag line used for this year's conference.

In the vernacular of economists, the outlook is for the United States to continue seeing a "U"-shaped recovery from the Great Recession. While the economy has bottomed out and the decline stopped, there will be a wide and slow up-slope to the recovery, such as it is.

Getting the Scoop in Israel —Sherburne

I thought it would be worthwhile writing about my recent visit to Israel, hosted by HP Indigo and Dscoop, the Digital Solutions Cooperative, an independent HP Indigo users group beginning its fifth year of operation.

The salary excesses in the financial/investment banking world that fueled widespread public outrage, however, won't be found among the earnings of principal officers at the largest publicly held printing companies.

Gerard Frank Cellette, 44, secured money from investors who were backing printing contracts that were apparently phony in what is generally considered  a Ponzi scheme.

Not the Best of Times

FOR THE second year running, Montreal’s Quebecor World captivated our minds and latched onto our attention span for the better part of the first six months of 2009—a thankful distraction from the economic woes our nation continued to experience. And for all of the negative news that permeated the front pages this year, it probably represented less than a third of all the closures and layoffs that actually took place. Perhaps ignorance is bliss.

Holiday music tends to put people in a better state of mind. Did it work for you? I know, it's hard to make the bad feelings of an entire year go away with a few lines from a Christmas song. We might have to book a Manheim Steamroller concert in order to sing away all the blahs accumulated during 2009.

Out of Sight, Out of Mind —Dana

My goal here is to give you plenty of ideas for keeping your name in your prospects' and customers' line of vision.

NewPage, Appleton Coated, Sappi Fine Paper North America and the United Steelworkers (USW) filed unfair trade cases on Sept. 23 with the U.S. Department of Commerce and the ITC alleging that certain coated paper from China and Indonesia had been dumped and subsidized, resulting in injury to the domestic industry.

MY NOVEMBER column was my 25th anniversary column and I just slap-my-head forgot about it. Twenty-five years is a long time to write a 1,250-word column every month and never miss an issue. I have missed most of the deadlines, but never an entire edition. I should have remembered.

Rolling with the Punches

The economy has devastated two of the nation's top direct mail marketers, namely the financial and automotive industries, resulting in fewer mailings for Chase credit cards, Toyota Tundra ads, home refinancing loans and the like.

FOR THE 26 years that Printing Impressions has been publishing  its annual ranking of the top printing companies in the United States and Canada, thankfully there have been more prosperous years than bad ones reported by the firms appearing on our list. The printing industry has suffered, and bounced back, from recessions before.

Now in its 26th year, the Printing Impressions 400 provides the industry's most comprehensive ranking of the leading printing companies in the United States and Canada.

It is fascinating to note what market influence the recession has visited on the book market, beyond the tempering of consumer confidence. But even in an atmosphere of printing platform right sizing and other business-related reconciliation, it is difficult to take any view but an optimistic one of the past year and the coming fortunes in 2010.

Two Newspapers are Battling Back