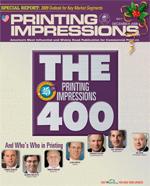 Printing Impressions’ Across the Nation Commercial Printing News for December, 2008.

IT STARTED out pretty innocently for John Abel, a press operator from West Berlin, NJ. He entered a Buick contest last March in the unrealistic hope that he would win one of the top prizes, a new Buick automobile. He would give the car to his wife of 32 years, Roe.

ONE OF the characteristics of a difficult economy is the slowdown of consumer confidence, which has a trickle-up effect on the goods and services sector. Less spending equals lower demand, equals lesser manufacturing output. The schizophrenic bounces of the oil market in 2008 is perhaps an extreme example.

With a sharp year-over-year decline in revenues and profit due to difficult capital markets, Bowne & Co. announced it will reduce its workforce by 10 percent to provide cost savings of $21 million to $23 million. The cuts bring Bowne’s total to 1,000 lost jobs in 2008, representing 24 percent of its workforce.

SOFTENING SALES. Declining revenues. Cutbacks, layoffs, bankruptcies. Unfortunately, these are the buzz words for 2008—not only for printers, but for most manufacturing segments across the United States.

Commercial Printing Outlook -- Build Up in Down Time

SAYING THAT 2008 is ending on an unsettled note may be the mother of all understatements, but it is the most meaningful way to characterize the economic outlook for 2009. And, bad news for the economy is worse news for printing industry sales.

ASKING WHAT kind of impact  that a recessional economy has on direct mail campaigns is like asking how many beach-goers will be turned away by an approaching hurricane. Sure, there are those who will want to brave it, but most people prefer to take a wait-and-see approach somewhere safe.

BAILOUTS OF financial institutions and pleas for assistance from domestic auto manufacturers have put top executive performance and compensation into the headlines. The excesses that fueled public outrage won’t be found among the earnings of principal officers at the largest publicly held printing companies included in Printing Impressions’ 19th annual executive compensation report.

Fast-Track Firms -- On the Move

AS AN economically unstable 2008 gives way to a poten- tially more tumultuous 2009, printers from the Sunshine State to Washington State are tightening their belts, digging in and preparing for the worst. Even the firms that forged through the mess and found success, including those named as 2008 Fast-Track Firms, are hoping for a better new year.

An explosion occurred at Flint Group’s manufacturing site in Slough, UK followed by a fire. The site was evacuated and the fire was quickly brought under control by local fire brigades. The cause of the explosion is not known yet.

HAVING RECENTLY returned from Graph Expo, I felt it was important to highlight a few things that came out of the show that might not have been covered elsewhere. First, as might be expected in the current economic situation, it did appear that attendance was a bit lower than the show company and exhibitors had hoped. Some booths were very busy; others less so.

Grafikom Is Now in Receivership

Grafikom, the sheetfed, digital and specialty printing company that spun off from Quebecor World in November of 2005, has ceased operations and is in receivership, according to the Edmonton Journal. The move leaves more than 500 employees in eight facilities out of work.

If Sales Reps Were Marines --DeWese

THIS IS the first column in my 25th year of column-writing for Printing Impressions. It’s number 268 and, when it’s finished, I will have written about 335,000 words as a columnist for the magazine. This one started about 30 days ago, when “Sarge,” one of my editors at PI, found a way to call me about every other day to subtly (or not so subtly) remind me that my deadline for this issue was November 10, which, by the way, happens to be the birthday of this former Marine’s beloved Corps.

With a dramatic decline in mail volume reducing the need for the facility’s core of acquisition mail, IWCO Direct announced that it was closing its Elm City, NC, facility, leaving 380 workers without jobs.

Overtime and holiday accounts are being run down at KBA’s web press production plants, and the Christmas closure extended. As was also announced on 14 November, KBA’s sheetfed facility, which officially introduced short-time work at the beginning of November, is having to trim its payroll by 400

LETTERS to the editor

Printing Impressions’ Letters to the Editor for December, 2008.

The Mallard Press is proud and excited to announce the purchase of American Graphic Specialties, a long-time provider of specialty products and services. In addition, key personnel from AGS will be joining the staff of Mallard Press.

A new operating structure has been implemented at Transcontinental Inc. to support its growth strategy by creating the Marketing Communications Sector. It is designed to accelerate the development of new services focused on one-to-one advertising and new communications platforms, while continuing to strengthen and extend its publishing and printing assets through its Media and Printing Sectors.

Nearly 300 leaders from the region’s $12 billion print marketplace gathered recently for the Printing Industries of New England’s (PINE) annual membership banquet to honor numerous individual and company achievements over the past year.

THE DAYS of the passive print buyer lie in the past. Print buyers are no longer sitting back and waiting for printer reps to cold call them or invite them out for lunch. In today’s technological environment, consumers are more proactive than they have ever been. They actively research their options and, with the advancement of the World Wide Web, it has enabled print buyers to spread a much larger net, capturing information on potential suppliers, even international suppliers.