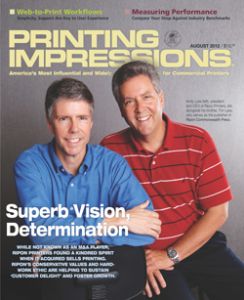 Ripon Printers is a company on the move, bolstered by the digital and commercial printing assets it acquired from Sells Printing—including a 10-color Heidelberg sheetfed offset press and two Xerox iGen4 digital presses. Customer "delight" and education have become significant forces in the way Ripon Printers has conducted business in the past 10 years.

Selling print is a tough line of work, I imagine, especially these days. What impresses print buyers? How do you, a sales rep, stand above the competition and get prospects' attention? I have an idea. You engage them. Here's a perfect example—and I couldn't have scripted it better myself.

PrimeNet Direct Marketing Solutions' facility is now hurricane Category 3 certified and its data center within the building is in a Category 5 certified bunker. Diesel generators provide a backup in the event of a power failure. A comprehensive disaster recovery manual has also been created by PrimeNet's executive team.

Easy Does It for Customers

New York-based Mimeo.com is one of the first online printing companies, having debuted in 1998. Its market position gives the firm a unique perspective on the concept of online ordering interfaces. Web-to-print is an ongoing quest for the perfect beast, according to Chuck Gehman, vice president of product platforms.

In May of 2009, I interviewed Dan Ellis, along with Frank Tantillo and Ray Cody, for the June cover story on C&S Press of Orlando, FL. Eight months after the article appeared, Ellis received life-altering news: He was suffering from amyotrophic lateral sclerosis, Lou Gehrig's Disease.

Printers must evolve the methods they use to communicate with their core markets. We recommend an integrated marketing strategy that involves direct mail, blogging, SEO and Web design, content marketing, social media and, you guessed it, broadcast e-mail.

InfoTrends’ recent “Emerging Trends” survey was designed to create performance and value innovation benchmarks for the production printing market. There were a total of 10 data points developed from this survey that a company can use to evaluate its performance.

Printing Industries of America (PIA) has announced that a dozen technologies were recipients of its 2012 InterTech Technology Awards. The technologies receiving this award have been judged as “truly innovative and are expected to advance the performance of the graphic communications industry.”

The House of Representatives is putting Mr. ZIP on ice, and the many industries impacted by the U.S. Postal Service are up in arms by the lack of action on postal reform. A Capitol Hill source told the National Journal that the House would not debate the reform bill prior to its August recess.

Taylor Corp. has reached agreement to acquire Venture Encoding of Fort Worth, TX. Venture is being merged with Corporate Graphics Direct Marketing Solutions, a Taylor affiliate based in Arden Hills, MN, with the new company carrying the name Venture Solutions.

While most companies were trying to remain afloat during the recession in 2009, Hauppauge, NY-based trade printer Island Pro Digital was just getting started. By creating a physical and digital media platform, co-owners Kurt and Kyle Kubik poised the company for growth and transformed it into one of the most successful (and busiest) trade shops in Long Island.

The Right Man for the Job

It's difficult to believe that Michael Meredith has been at the helm for just 10 years, yet The Printing Express has experienced incredible growth. The company now employs 24 people and sales, which stood at roughly $300,000 in 2002, hit nearly $4 million in 2011. The company is on target to post revenues of $6 million to $7 million this year.

Every month, Steve Olson, owner of Steve Olson Printing and Design, writes a check for $700 to pay for a glorified paper weight.