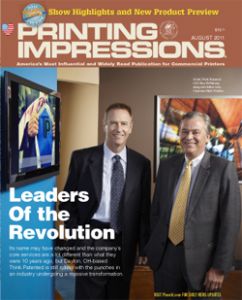 Relatively new content management system (CMS) tools, such as Wordpress and Drupal, greatly reduce the technical know-how needed by printers to maintain a fresh-looking Website. Once your site has been designed and launched by a professional Web developer, CMS tools help your company or an outside marketing resource deliver the timely, dynamic content your visitors—and customers—crave.

Solving problems beyond print has been a way of business for Alexandria, VA-based Global Printing since the day Jerry Dreo, founder and former president, started the company in 1979. Global Thinking is its creative/marketing services and software development business unit that provides clients with Web design and Search Engine Optimization (SEO), e-mail marketing, database development, printing and mailing, as well as  e-commerce and fulfillment.

About two years ago, Hudson moved from a conventional, film-based platemaking process to a computer-to-plate (CTP) workflow.

If the printing company of tomorrow is going to look vastly different than it did even just five or 10 years ago, then it stands to reason that the printing trade show of tomorrow is due for an infusion that goes beyond Botox and a fanny implant. These changes will be more philosophical than cosmetic,…

Some printers started offering one or two campaign-type services (like variable data printing or Web-to-print) and called themselves Marketing Services Providers (MSPs). It's this shallow, in-name-only  rebranding that I object to, not the fact that printers must evolve.

Smith-Edwards-Dunlap Co. (SED), which was established in 1880, and Graphic Arts Inc., which dates back to 1928, have merged. Each company will continue to do business under its present name. However, operations will be combined into the 120,000-square-foot SED facility.

Religious publishing and related items—church bulletins, catalogs and kitting—represent a lion's share of the work produced at Ambrose Printing. For the past 30-plus years, the company has enjoyed a close and fruitful relationship with one of the country's largest religious publishers.

Consolidated Graphics continues to conduct its can-you-top-this educational and fraternal emerge event, the most recent of which was held May 17-20 in Dallas. This year's extravaganza boasted nearly 1,000 attendees—CGX finally had to cap its guest list, notes Aaron Grohs, executive vice president of sales and marketing.

Padgett Printing, a commercial printing, packaging and direct mail specialist with business roots that trace back more than 100 years, is winding down toward a closure, President and CEO David Torok has confirmed. At press time, no date had been set for the shutdown of the company, which employs about 65 people.

Like many in our industry, I was in Chicago at the PRINT 01 trade show. Slated to fly home to Philadelphia later that day, I never made it to O'Hare Airport before all planes were grounded, and ended up in Chicago three extra days before securing a rental car to drive home.

Michael Widmark, a third-shift worker at Taylor, MI-based Printwell Inc., had his commute home early one morning end up meaning the difference between life and death for a Canadian neighbor. Widmark's journey home on June 8 was interrupted by the incredible sight of one tractor trailer slamming into a flatbed truck that had been parked along the side of Interstate 94.

Is it wise or profitable to seek out requisitioners or corporate-level types, as opposed to print buyers, in search of work? As printers take on more of the services that have traditionally been identified with advertising agencies, can the marketing-evolved printer play nice with an ad agency client?

The revolution in the printing industry is one of survival, of technology and redefining and reinvention. Think Patented boasts of offering digital static and variable data printing, mailing, fulfillment, promotional products and other Web-based solutions to go with its sheetfed offset printing arsenal.

Over the course of two months, Valpak is mailing to more than 80 million households with QR codes on the outside of the envelope and on individual inserts. This is the first national QR campaign for Valpak.