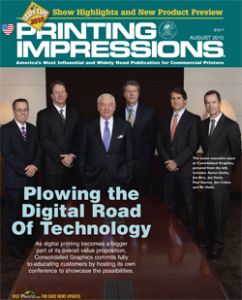 Despite all the buzz about the marketplace upheaval that will eventually ensue as high-volume, continuous-feed, color inkjet presses gain greater traction, don't assume that your existing offset presses and cutsheet digital output devices will become obsolete any time soon. Nor should that deter any plans to upgrade your offset gear or acquire an electrophotographic (EP) digital machine.

A Primer on Inkjet Presses

If you believe the hopeful hype of equipment vendors and the prognostications of pundits, you might be inclined to think that high-speed inkjet presses are poised to irrevocably transform the printing industry and hasten most offset and digital presses to their next life as boat anchors.

All the Right Moves

Prisma Graphic has transformed itself from a boutique print shop into a full-service marketing supply chain provider with a strong online presence. Ever since, the company has experienced 10 to 15 percent annual growth.

Cenveo Inc. has found a new home for two of its Missouri facilities, according to the St. Louis Business Journal. A 220,000-square-foot plant in Eureka, MO, that formerly housed an automotive supplier will replace Cenveo plants in Sunset Hills and Crestwood.

Here's an exclusive, pre-show preview showcasing new products  and services submitted by several exhibitors that will be displaying their wares at GRAPH EXPO 2010 in Chicago from Oct. 3-6.

As the new decade begins, InfoTrends focuses on the  status and prospect of color inkjet technology in the commercial printing industry. The current systems are successful in forms printing, book printing, direct mail, transactional and TransPromo applications.

Much anecdotal information would seem to point to banks and industry lenders making it much more difficult to obtain financing or a line of credit. Is it the case? Is it tougher to nail down financing now than it was prior to the recession?

The Deal of the Decade is complete. Worldcolor received final approval from the Quebec Superior Court for its "plan of arrangement," allowing it to be acquired by Quad/Graphics.

It’s Time to Get Fired Up —DeWese

The major networks, the cable people and the Internet people are conspiring to obliterate print. Otherwise, why are we down from 53,000 printing companies in 1987 to about 25,000 today?

Brothers Brian and Kevin Driscoll, co-owners of New Haven, CT-based Phoenix Press, could not help but be excited about their new 156-foot wind turbine. The brothers never imagined that their family owned commercial printing business would serve as a prime location for harnessing wind energy.

A health study sent out to more than 2,000 adolescent girls by the University of Florida inadvertently contained their Social Security or Medicaid identification numbers on the address labels.

The new national record for the most consecutive strikes thrown is now held by, you guessed it, a printer. Step aside, Superman, and make way for Tommy Gollick, arguably the most prolific bowler in history.

Agfa Graphics has signed an agreement to purchase the assets of the Harold M. Pitman Co., a distributor of prepress, industrial inkjet, pressroom and package printing products and systems in the United States.

Printing by the Numbers

The combination of the Vs Series inks on uncoated stock—a popular choice today—has resulted in multiple benefits. For one thing, Van Son inks dry very quickly, and that, in turn, means Lorraine Press can finish print projects faster.

Sappi Fine Paper, in partnership with The Print Council, recently hosted more than 200 media and marketing specialists and publishers at the Art Directors Club for a "Print Delivers" lunch-and-learn event. The sixth such seminar in an ongoing series presented around the country by The Print Council, presentations raised awareness about the viability of print media and its effectiveness as part of cross-media communications.

A funny thing happened over  the past year or so: Corporate and agency print buyers and printers grew more and more like each other. Sure, there's still tension between those who manufacture and sell print, and those who buy it.

Like the the swallows returning to Capistrano or  the L.A. Lakers reaching the NBA finals, Chuck Stempler can be counted on to make his annual pilgrimage. Come fall, the president and CEO of AlphaGraphics Seattle can be found in the Mecca of U.S. printing trade shows: Chicago's  McCormick Place for GRAPH EXPO.

The Countdown to Blastoff —Farquharson/Tedesco

IT'S AUGUST. You are likely chillin' in the company hammock, sipping lemonade and perusing PI's newest column while asking yourself, "Farquharson and Tedesco. Who are they?" Meanwhile, an important event is looming, one that would knock you off of your hammock if you understood its importance; one that should be a recognized holiday by salespeople everywhere; one that looks innocent but, in fact, packs a wallop.

The Dukes of Digital

Printing is still part of the solution at Consolidated Graphics (CGX), the $1.2 billion commercial kingpin based in Houston. But people are an even bigger part. Joe Davis, president and CEO of the 10th largest printing enterprise in North America, likes to surround himself with energetic, enthusiastic and intelligent folks.