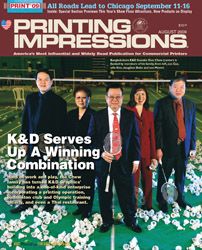 MY JUNE column was about the absence of Stimulus Program money going to the graphic arts industry. We consist of about 30,000 firms, around one million workers, and we were totally overlooked by the White House and Congress.

Printing Impressions Across the Nation Printing Industry News for August 2009

TAKING DIRECT marketing to the next level is something the executive team at Swedesboro, NJ-based Direct Group knows a thing or two about. Last year, the fully integrated direct marketing solutions provider invested heavily in new equipment to leverage digital color printing technology for clients in both its direct mail and fulfillment areas.

OK, BE honest. It’s not out of the ordinary for industry conferences, seminars, open houses, etc., to be conveniently scheduled in a warm, scenic locale not far from a golf course or other recreational venue. And it’s quite natural for printers to avail themselves of opportunities to relax and have fun during—excuse me, after—the scheduled business events.

MARTINSBURG, WV—Firefighters battled through the night to douse a press fire and clear out thick clouds of smoke at Quad/Graphics’ plant here. No injuries were reported, but the smoke caused about $100,000 worth of damage, according to The Journal of Martinsburg, WV.

PITTSBURGH—Printing Industries of America has announced the recipients of the 2009 InterTech Technology Awards. The independent panel of judges deliberated over technology submissions ranging from process control tools to MIS applications. Recurring themes in 2009 InterTech nominations were process efficiency, integration and improved manufacturing performance through use of the innovative technologies.

Is Climate Legislation a Mixed Bag?

Concerns about the effect of carbon dioxide on climate change have prompted governments to consider restrictions on emissions from industries. A cap and trade program would place a cap on nationwide emissions of greenhouse gases, and require industries and energy companies to purchase emissions certificates to continue operations.

Jürgen Rautert — The View from ‘Hei’ Above

In an exclusive interview with Printing Impressions, Dr. Jürgen Rautert—member of the Management Board responsible for sales, customer- and market-focused activities, product management, services, consumables and marketing for Heidelberger Druckmaschinen AG—talks candidly about the challenges and opportunities.

PRINTING INDUSTRY presidents and CEOs often reflect on the skill sets that they acquired while playing sports in high school or college—teamwork, leadership, discipline, tenacity—and how those traits apply to their success in the business world. But few executives have hailed their sports to the degree that Don Chew, president of K&D Graphics in Orange, CA, has tipped his cap to the game of badminton.

Media Days — Get Ready to PRINT

NORMALLY, THE point of comparison for PRINT 09 would be the 2005 show and maybe Drupa 08, but attendees will find the show floor more akin to Graph Expo 08 in terms of the number of exhibitors and the makeup of their booths. The Graphic Arts Show Co. (GASC) has taken an unprecedented step to maximize the amount of equipment on hand by offering exhibitors a stimulus program to offset most of their setup costs.

MODERN International Graphics is an FSC-certifed, $15 million, G7 Master Printer with a dozen Fortune 500 clients. But, it’s the way that the company operates—its corporate culture—that is truly exciting for the company’s leaders.

GIVEN THE state of the economy, it’s not surprising that printers are constantly on the lookout for fresh revenue streams. Heck, even in a robust economy, printers are seeking out ancillary products and services to help offset the erosion of more mature or vulnerable markets.

Organizers Built It. Now, Will You Come? —Michelson

WITH APOLOGIES to Kevin Costner and his memorable line, “If you build it, he will come,” from the 1989 classic “Field of Dreams,” the Graphic Arts Show Co. (GASC) has taken proactive measures to entice both suppliers and printers to participate in the PRINT 09 exhibition in Chicago next month. But, unlike the film, it’s required far more effort than converting an Iowa cornfield into a baseball diamond.

SOME PUNDITS have argued that we are quickly transforming into a society of narcissists, as evidenced by the growing attraction to so-called social networking Internet applications like Twitter, MySpace and Facebook. Regardless of whether they’re fast-burning fads or phenomenons that are here to stay, they’re shining examples of the weight that personalization carries in the 21st century.

MONTREAL—Freedom, despite what its name implies, most certainly comes at a stiff price. But Quebecor World can now be marked down as paid in full...and free. Quebecor World, its affiliated debtors and debtors-in-possession have successfully emerged from bankruptcy protection under Chapter 11 of the U.S. bankruptcy code and the Companies’ Creditors Arrangement Act (CCAA) in Canada.

Some PURLs of Wisdom —Sherburne

THE CURRENT economic situation has not been kind to our industry. On a national basis, printing shipments continue to slide, with May commercial printing shipments down $761 million as compared to May of 2008—a decline of 9.4 percent.

The Marek Group — Founded on Quality

The Marek Group has more than 170 employees and provides a variety of offset and digital printing, as well as Web-to-print capabilities, to a wide range of industries. Offering a broad range of printing applications has rewarded the shop with a loyal customer base.

Transcontinental Inc. is selling its Transcontinental Miami Valley printing facility to a company controlled by Ralph Pontillo. The transaction ensures the future of the plant, which specializes in insert printing for local retailers.

Transpromo Printing — The Message Is the Medium

The printing industry seems to keep looping back a year when it comes to certain major developments. This is particularly true for digital printing, come variable data, which was the “next big thing” in the industry for about a decade before the adoption rate even started to approach the robust expectations.