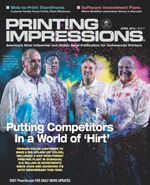 Lancaster, NY, resident Jerry Kajfasz—a press operator for International Imaging Materials in Amherst, NY—was enjoying a visit to Depew One Stop on Broadway Street in Depew, a convenience business Kajfasz calls his "day off store." On this chilly Saturday, Kajfasz treated himself to a small lot of scratchoff lottery cards. He had pulled some previous winning cards and rolled them into a mix of different tickets. Tucked into the handful of scratchies the store clerk handed to Kajfasz, 53, was a "Win For Life Spectacular" scratchoff lottery card game. The only problem was, Kajfasz hadn't asked for that one.

Marcel Kiessling, a member of Heidelberger Druckmaschinen's executive management board for sales and service, has left the company as part of a mutual agreement. Kiessling joined Heidelberg in 1989 and was responsible for guiding the Americas business from 2004 to 2010.Harald Weimer, president of Heidelberg Americas, has replaced Kiessling on the board in Germany.

Last month Agfa Graphics held an open house for select industry journalists and customers at its new competence center in Mississauga, Ontario. The first of a series of North American "Red Carpet" customer events, the open house kicked off with a keynote presentation from Dominiek Arnout, Agfa Graphics' vice president/inkjet, and his team, who shared the latest in research developments and applications, as well as the changing dynamics in digital sign and display printing.

George Gallo, the state House Republicans' chief of staff here, resigned as federal investigators are looking into whether Connecticut GOP legislative candidates were improperly directed to use a direct mail printer located in Florida. The company, Clearwater, FL-based Direct Mail Systems, allegedly received upwards of $2 million worth of business from the candidates' campaigns since 2008, the Hartford Courant reported.

Those that bring information to the table are more valuable than those who just say, "Hey, here's my price, may I have the order?" (Kind of a lame value prop, eh?) Instead, carve out a knowledge niche or two for yourself in your marketplace, and become a "go to" resource for your clients and prospects. If you do this, you will sell more.

For printers that already offer layout and design services, an unexpected revenue source (or at least a way to retain customer loyalty) may be digital media itself, in the form of interactive apps for tablets and smartphones. Unlike Websites, apps can be created with the same tools used to produce printed pages. With a modest software investment, plus incremental training of existing staff, printers can offer their clients supplemental interactive collateral—to complement their printed products.

Mercury Print Productions is changing its name and relocating its business to another area of its Rochester, NY, home city. The company, which specializes in textbooks and educational materials, is being rechristened Mercury, An Innovation Solutions Co., according to the Rochester Democrat and Chronicle.

Planning and Executing a Successful M&A

In this new editorial series for Printing Impressions, New Direction Partners will offer guidance in a business strategy that we believe every printer needs to be thoroughly acquainted with: the planning and execution of successful mergers and acquisitions. It's a complex subject and, in columns and blogs to come, we'll detail many of the actions that take place when two printing companies decide to come together as a whole that's greater than the sum of the parts.

Primary Color: Master of Its Own Destiny

As it prepares to celebrate its 30th anniversary, the executive leadership team at Costa Mesa, CA-based Primary Color prefers to look ahead as opposed to reflecting on where it's been. Not that the multi-faceted printing and marketing services performer needs to wash away the past...it's the future, however, that is generating much excitement among the Hirt brothers (Dan, Ron and Mike).

Transcontinental Inc. has acquired the assets of Capri Packaging—a division of Schreiber Foods, and a supplier of printed flexible packaging—for a purchase price of US$133 million. The transaction is subject to regulatory approval in the United States. "This acquisition represents an important strategic move for the corporation into a new, promising growth area," said Francois Olivier, president and CEO of Transcontinental Inc.

In the B2B space, where actions are much less dictated by emotions, purveyors of Web-to-print (W2P) ordering systems must contend with perception when it comes to ease of use, notes Jim Rosenthal, vice president for Paradigm Digital Color Graphics in Southampton, PA. Clients still want to be able to move orders off their desks within three to five clicks. By the same token, printers also want that level of simplicity, particularly when it comes to integration.

Industry experts often talk about how today's production environments need to focus beyond solutions that enable workflow automation and, instead, on those that provide value-added services that meet the customer's evolving needs. Workflow automation is no longer the next "big trend" in production printing—it is now just a good business practice. The survey is part of an ongoing partnership between InfoTrends and North American Publishing Co. (NAPCO) to monitor emerging market trends.