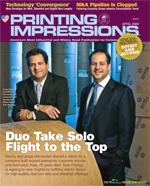 SINCE WE do not cover international printing events, the following item did not appear on our news pages this month. But we seem to have hit another patch of fatal, machinery-related incidents. The most recent accident happened in Australia, where an 18-year-old man was dragged head-first into a box printing machine in mid-February. It took 45 minutes to extricate the worker, who died later that day at a hospital.

There’s nothing like Florida in early March to remind you that the doldrums of winter will soon be in the rearview mirror. Thus, the 2009 Presidents Conference, sponsored by the Printing Industries of America (PIA), allowed attendees to take a spring-like view of things to come as the year progresses.

Printing Impressions' Across the Nation Commercial Printing News for April 2009

BLAME IT on the around-the-clock cable news channels, the endless talking heads appearing on financial talk shows, and negative articles in daily newspapers and on popular Websites, which seem to post one doom-and-gloom story after another. Industry publications, including Printing Impressions, can also be taken to task for playing up news of plant closures and head count reductions—even though PI’s printing company profiles (check out this month’s cover story) and columns highlight successful companies and provide sound business advice.

Brown Printing will eliminate about 200 jobs across its network of plants, accounting for roughly 8 percent of its workforce, according to the Business Journal of McHenry County (IL). A representative of the printer told the newspaper that the move was prompted by dwindling orders from its customers.

Carlson Print Group (CPG) is letting everyone know what it thinks of its new Roland 706 Hi-Print UV press with In-line Foiler Prindor. The digital and offset printer, a division of American Spirit Graphics Corp. (ASGC), was quick to pick up business soon after promoting its new addition on its web site. Installed in December 2008, the 40-inch, 6-color press presents an extra shot of competitive marketplace thinking to CPG’s overall strategy.

IT’S HARD not to automatically view everything through the frame of the current economic climate. In most cases, however, the business challenges companies are struggling with were preexisting conditions that have now been greatly amplified. The trend toward print buyers, at every level, cutting back their order quantities is a case in point.

Dscoop4 wasn’t exactly fun in the Florida sun, but the tone of the conference was surprisingly upbeat despite the economic forecast and less than stellar weather. Both attendance and participation in the vendor solutions showcase increased from 2008.

For All You Time Wasters --DeWese

MANY, MANY years ago, when we had no chores, when we weren’t in church, or when we weren’t building barrels or making wagon wheels, we would play tic tac toe or connect the dots by the light of the one bulb in our ceiling.

The Argus Press, one of the nation's top commercial printers and communication resource companies; and a division of Nationwide Graphics/ Premier Print Organization (NG/PPO), is proud to announce that Mike Ford has become President of The Argus Press in Niles, IL.

For the first time ever a student from the U.S. will compete in the WorldSkills offset printing competition to be held September 1-7, 2009, in Calgary, Canada. Amela Mujkic, a senior at Ferris State University, was recently selected from among three competitors at the qualifying competition held at Heidelberg USA's Print Media Academy, Buffalo Grove, IL.

Quebecor World ushered in the opening of its new co-mailing facility in Somerset, NJ, with the addition of two new 30-pocket machines. The new capacity allows more publishers and catalogers to take advantage of the benefits of co-mailing. Quebecor chose the Somerset mail consolidation site due to its strategic proximity to the densely populated Northeast.

THE ECONOMY is acting as a clog in the plumbing of printing industry M&A. The system is feeling more and more pressure from companies prolonging their desire to sell a business that perhaps needs an infusion of new blood or new equipment. Then there is the buyer...his hands locked by tight credit markets or unrealistic seller expectations.

Océ, an international leader in digital document management and delivery, has been recognized at this year’s ON DEMAND Conference & Exposition with a Best of Show award in the Color Digital Printing Equipment category for its new Océ CS Tandem family of scalable production cutsheet color printers. The Océ CS Tandem color cutsheet platform won for its unique flexibility, consistent color quality and production productivity.

Offset and Beyond — Great Technologies, But Tough Times

When it comes to forecasting the current sheetfed and web offset markets, the biggest threat isn’t just digital technology, it’s the state of the economy. There are some pretty exciting developments going on in the lithographic printing market this year, but that’s the problem. It’s 2009.

Several presenters at the sold-out Print UV 2009 technology conference, held March 8-10 at the Wynn Encore resort, declared that UV and hybrid UV technology might well represent the future of the offset printing industry. Based on the impressive turnout for the event, it would seem that many printers agree and are eager to capitalize on the opportunity.

The Wall Street Journal (WSJ) plans to close its regional printing plant here this month and contract the printing of its newspaper, along with the weekly Barron’s, to The Des Moines Register, that paper reported. The current WSJ plant, which employs 25 people, produced editions for a four-state area.

OF THE MANY insights that stand out in Eli Goldratt’s book, “The Goal,” one of the most memorable is the plant manager’s frustration with a machine operator reading a newspaper while on the clock. Like most of us, the plant manager thought that working harder or faster would naturally generate more money for the business. That’s pretty straight forward, right?