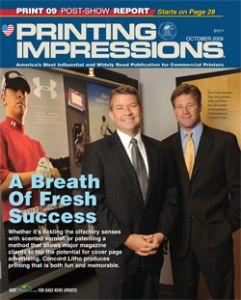 Many commercial printers sell promotional products to supplement their other product and service offerings. Relative to the balance of a printer's capabilities menu, promo products are uncomplicated.

Mark Angelson, 58, has been named chairman and CEO of the newly rebranded Worldcolor, formerly World Color Press and Quebecor World, as it attempts to re-establish itself after emerging from bankruptcy protection.

The growth of multi-faceted Creel, a reputable Las Vegas-based sheetfed and heatset and coldset web printer since 1953, flies in the face of the difficulty being experienced by the casinos. The publication, catalog, direct mail and commercial printer has cruised along the fast track during the past 10 years, growing its staff from 160 employees to 600 and two plants

When considering installing a scrap paper removal/recycling system, outside of the paper volume that is generated, what other factors come into play? An argument can be made that even a moderately inelegant scrap paper recycling setup is preferred over the investment required to install a properly configured removal and recycling system.

Do You Have What It Takes? —DeWese

The survivors will have the best salespeople, not necessarily the best equipment. Oh, they will have good machinery, good software, good management and good (low) costs but, above all, they will have dynamite salespeople working within and propelled by a superb marketing program.

Putting greater emphasis on applications and business development tools has been a growing trend among trade show exhibitors.

Indianapolis-based Fineline Printing Group has grown each and every year since its founding in 1981, in spite of various challenges, including the current financial markets crash that has spiralled the nation (if not the world) into an economic tailspin.

NAPL to PIA: No Thanks

PIA President and CEO Michael Makin recently sent out a short letter to PIA members, informing them that NAPL has rejected an offer of consolidation discussions with PIA.

From an internal costs perspective, volatile insurance rates have caused massive headaches for businesses and their employees, with both usually sharing in the pain. Small businesses in particular—without the protection of better terms for companies that enjoy mass participation—often experience devastating increases.

No Surprises, No Excuses

Joe Stoeckle, senior buyer at R.L. Polk & Co., will go out of his way to maintain good working relationships with his print providers. The products and services that he purchases are important to his employer's business—and the job he does at purchasing them is critical in his position as a buyer.

PRINT 09 sheetfed and web offset press exhibitors were all singing the same tune that the "holy grail" to achieving profitability in these tough times lies in a print shop's  efficiency—quick makereadies, waste reduction, higher productivity with less people, as well as value-added capabilities to diversify and differentiate one's offerings.

For postpress, there was cause for optimism. While binding and finishing gear, in general, has a long life span, there was some speculation that printers looking to buy may opt for these types of upgrades/additions, which constitutes a far cheaper investment/risk in a sour economy than does a multi-million-dollar printing press.

DEPENDING ON who you talk to, the recent consolidation discussion proposal extended by the Printing Industries of America (PIA) to the National Association of Printing Leadership (NAPL)  was either an "olive branch" representing a goodwill gesture to explore the feasibility of merging, or a "red herring" meant to deflect attention away from the challenges that the PIA is facing both on the national level and among several of its localized affiliate chapters.

Concord Litho, the pride of the New Hampshire town that bears its name, has captured more than 50 awards in the past three years from entries in various worldwide printing contests. Augmenting the powerful designs and superior printing jobs from this independent web and sheetfed printer, in some cases, is a breath of fresh air in the form of chocolate, fresh-cut grass, popcorn, Oreo cookies and pickles. Yes, pickles.

As we skate into the fourth  quarter of what has been a  very difficult year, it is none too soon to be thinking about strategies for 2010. With that in mind, I have put together a Top 10 "must do" list for 2010.

Several U.S.-based coated paper manufacturers, led by NewPage Corp., are asking the federal government to level the playing field by imposing duties on China and Indonesia for subsidizing and dumping certain coated paper.

Why Print Is Truly Green

How do you turn a rusty, 20-year-old delivery truck into the talk of the town? If you have wide-format printing equipment on hand, you wrap it in colorful promotional images and send it back onto the streets.

Wide Open to the Opportunities

PRINT 09 offered an array of wide-format printing systems and highlighted a number of industry trends that could present opportunities for commercial printers, including sustainability and high-volume POP production.