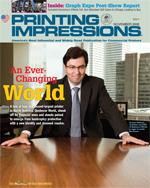 Printing Impressions' Across the Nation Commercial Printing News for November 2008

Coping in This Economy --Morgan

THERE IS no doubt about it; the present economy has had a negative impact on how much print is being purchased by buying companies. At least, that’s what 75 percent of the participants in Print Buyers Online.com’s recent Quick Poll survey stated. So how can you, as a print supplier, keep the clients that you have while encouraging new business relationships? This article addresses several tactics that you can take to remain afloat in today’s troubled seas.

DPI of Rochester -- Sustainability by Design

WHEN DPI of Rochester decided (in 2006) that it was going to relocate, company execs knew that America’s green revolution was well under way and, most likely, here to stay. Setting their sights on all things green, they purchased a building located on a former landfill. The facility itself was a prefabricated steel structure, components of which were made from recycled scrap metals.

For Quad, It's Easy Being Green

WASHINGTON, DC—In a story broken by The Washington Times, the Government Printing Office (GPO) has repaid the State Department more than $51 million stemming from overcharges from the sale of millions of blank passports.

Countless binding and finishing technology providers were candid in their positive assessments of how the scene went down in McCormick Place South. It wasn’t all cartwheels and champagne popping, but this year’s Graph Expo did exceed the expectations of many.

The focus at Graph Expo was on what’s available to buy today, especially with the deadline looming for the investment tax credit. Digital press vendors asserted that the current economic conditions play to the technology’s strengths. Shorter runs produced on demand combined with more targeted, personalized printing enable the industry’s end customers to make the most of their printing spend, the argument goes. And, it’s more sustainable to boot.

Despite growing industry demand for digital printing devices, the fact remains that lithographic sheetfed and web presses still dominate the pressrooms—and revenue streams—for the majority of commercial printing operations. Following on the heels of Drupa in Germany, Graph Expo in Chicago provided the first glimpse for most U.S. printers to learn first-hand how offset press manufacturers continue to prove their relevancy in an evolving industry.

AS A society, we rely on plastic for its strength, resilience, flexibility, elasticity, durability and protective properties, characteristics that have not escaped the notice of print buyers and specifiers everywhere. As a result, many printers increasingly view printing on plastics as a way to differentiate themselves, while turning out products of higher value demanded by their customers—value they hope can be reflected in premium prices and higher profit margins.

NEW CANAAN, CT—Just when you thought it wasn’t safe to come out in the printing investment world, along comes a pair of industry veterans with a bankroll and a plan.

I Thought I'd Seen It All --DeWese

THIS IS my 267th Printing Impressions column. I have written these columns since November 1984 in all sorts of adverse conditions. Hurricanes? Tornadoes? Heart failure? Worldwide economic meltdown?

LARGE-FORMAT sheetfed offset printing means different things to different printers. But, whether it’s the ability to be more competitive in package printing, outdoor signage, taking advantage of the larger sheet size, or finding new applications for uncommon substrates, there seems to be ample reasons for printers to acquire these mini monsters.

THE TIMING of the U.S. printing industry’s most important trade show could hardly have been worse. It took place amidst a barrage of media coverage on dried up commercial credit markets that threaten companies, across many industries, from securing financing to meet their short-term commitments—let alone receiving the financing to make capital equipment expenditures.

EXPLOSIVE is how the executives at Irvine, CA-based MyPrint Corp. would describe the growth their company has experienced in the past three years. MyPrint operates on a simple mantra: “Focus on the things that make our customers very successful and do them exceedingly well.”

Omaha Print -- History in the Making

As the new millennium ticks away, Omaha Print (name change circa 1885) continues to be a model Midwestern company, employing nearly 100 townsfolk who still produce a much-needed commodity: sales catalogs for the breeders of cows and pigs.

HARRISBURG, PA—Criminal charges are being filed by Pennsylvania Attorney General Tom Corbett against two men who allegedly worked in tandem to fix bids for printing work with the state’s student loan agency.

MONTREAL—A six-color, 56? KBA Rapida 142 hybrid UV press is the centerpiece of a $7 million capex investment project by Pazazz, which is looking to establish itself beyond the 40? sheetfed market. The plant upgrade also includes a large-format Fuji Ultima platesetter, Busch pile turner and large-format Perfecta cutting system.

In mid-October, President Bush signed into law the Prioritizing Resources and Organization for Intellectual Property (PRO-IP) Act, without the controversial provisions that were initially found in the House bill.

Proving That You're Sustainable

MORE THAN ever, printers are being asked by their customers to prove their green credentials. In response to the demands for printers to create a creditable recognition program, the Sustainable Green Printing Partnership (SGP Partnership) was created. On August 28, the SGP Partnership began accepting applications from printers that want to be recognized for their efforts at being a sustainable green printer.

Quebecor World -- Back on Top of Its World