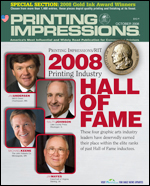 NO ONE can blame Michael Keene for having grandiose dreams. Who among us, in our youth, didn’t dream of becoming a professional athlete, a rock star, an astronaut, or perhaps a fireman? Maybe that dream was to run away and join the circus.

IT WOULD be safe to say that Jim Mayes is having the type of year that most printing executives would dream about, and it’s not due to a huge influx in the bottom line for his company, ColorCraft of Virginia.

WHILE A student at American University in Washington, DC, Jim Andersen taught swimming on the side to youngsters at Kenwood Country Club in nearby Bethesda, MD. Little did Andersen realize at the time that the father of two students would soon alter his career path.

Printing Impressions' Across the Nation Commercial Printer News for October 2008

BRAINERD, MN—Book manufacturer Bang Printing has obtained Delta Printing Solutions of Valencia, CA. Terms of the deal were not disclosed. The combined company has 350 employees and will produce more than 15,000 titles annually.

MINNEAPOLIS—Bolger Vision Beyond Print has completed the acquisition of fellow Twin Cities printer Diversified Graphics. According to the Minneapolis-St. Paul Star Tribune, Bolger was the winning bidder at $10 million for the assets of Diversified, a deal approved by a U.S. Bankruptcy Court.

LAST MONTH marked my third anniversary heading up mergers and acquisitions at Consolidated Graphics (CGX), and it feels like three months instead of three years. This may be due partly to the fact that we have been very busy on the M&A front.

MONTREAL—Some creditors of bankruptcy-protected Quebecor World have asked the court for permission to file suit against the printer, seeking $376 million they claim was paid to 14 private lenders prior to bankruptcy to buy back its debt.

BELLMAWR, NJ—10/01/08—Evergreen Printing Co. has completed a change in ownership effective September 26, 2008. Its new owner and president, Carmen Pinto, has known Evergreen for 16 years and has a broad understanding of the market and customers we serve. Pinto's involvement in the printing, publishing and paper industry will provide effective leadership in meeting the needs of the company's customers.

WE’RE ALL human beings—displaying courage, steadfastness and humility at times during our lives; but also succumbing to selfishness, lethargy and a lack of empathy for others. Knowing the right thing to do doesn’t always mean we’ll do the right thing. However, there are those among us, although still human, who seem to rise above any shortcomings they may have and lead by setting a positive example. Such surely seems to be the case with this year’s class of Printing Impressions/RIT Printing Industry Hall of Fame inductees.

IN 2002, I spoke at an industry gathering lamenting the dwindling profit margins in the printing industry as a result of the post 9/11 economy, the post-Y2K phenomena and the then-new concepts of e-commerce, reverse auctions and corporate RFIs. I was cautiously optimistic about an economic recovery, but concerned that we, as an industry, would not be able to harness the momentum behind a recovery and convert it into growth and profits.

LETTERS to the editor

Former printing company executive Arthur Wetzel, shown on the left, is the man of the hour during his 105th birthday celebration in August. Sharing in the festivities is Joe Davis, the president and CEO of Consolidated Graphics in Houston. Read story in Bits and Pieces.

SANTA ANA, CA—October 1, 2008—Markzware, the leading developer of preflighting, data extraction and conversion software, today announced that it will be showcasing Bob Killen, artist in residence for the Mojave National Preserve, US National Park Service photographic artwork, of our national desert resources, at Graph Expo in Chicago from October 26-29, 2008 at booth #5255.

Industry consolidation, economic uncertainties, soaring costs for raw materials and energy and many other forces are changing our industry at the speed of thought. At NPES’ 75th Annual Conference, November 15-17 in St. Pete Beach, FL, participants will have an opportunity to learn firsthand how one progressive print organization managed to overcome these challenges. Read on for this preview of how, by developing strategic partnerships with industry manufacturers and service providers, the Valpak Manufacturing Center in St. Petersburg, FL has become a showcase of automated print production—and has managed to hold the line on costs for its customers, increased its productivity and morphed its employees into a skilled workforce for tomorrow. Valpak is one of North America’s leading direct marketers with $260 million in annual revenue and about 1,200 employees in Pinellas County. Valpak reaches more than 45 million unique addresses each month in the United States and Canada and is owned by Largo-based Cox Target Media.

Proponents of expanding options for domestic energy production scored a major victory when the House passed legislation that would lift the Congressional moratorium on offshore drilling on the Outer Continental Shelf (OCS). PIA and its allies in the “Secure Our Energy Coalition” have long advocated this move. The action removes another barrier to development of offshore oil and natural gas, and is part of a larger continuing appropriations act that the Senate will soon consider.

A new PRIMIR study entitled “Trends and Future of Financial and Transactional Printing through 2012” was released in the spring of 2008. The study focused on commercial printers as well as in-house data centers and print-for-pay data service bureaus. A principle objective was to develop a comprehensive analysis of the digital printing (including inkjet) market opportunity for this application and identify drivers and threats to printed output in 2006 while at the same time forecasting trends and opportunities through 2012.