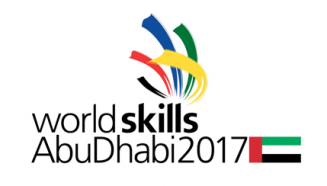 LEESBURG, Va. — Chandler Kerr of Severn, Md., will represent the United States in Print Media Technology during the biennial WorldSkills Competition in Abu Dhabi, United Arab Emirates. Kerr will compete as a member of the SkillsUSA WorldTeam. The 44th international event will be held Oct. 14-19.

Kerr won the right to compete by earning the gold medal at both the 2014 and 2015 high-school Graphic Communications competitions during the SkillsUSA Championships. He has also successfully completed other qualifying prerequisites prior to being chosen for the team.

“Being able to represent my school was fun. Representing the entire state of Maryland at the national competition was amazing. And now, to have the chance to show the world the best of the United States is incredible,” said Kerr. “I never would have imagined that I would be going to this competition, and now that I have been selected, I couldn’t be more thrilled to participate and do my best.”

Paul Foster of the Printing and Graphics Association MidAtlantic knows Kerr through his involvement in SkillsUSA regional, state and national competitions and from Kerr’s printing classroom. When asked about Kerr’s abilities, Foster said, “If ever the United States had a chance to medal in the WorldSkills printing competition, I think Chandler is the one to do it. Half the battle of succeeding at WorldSkills is having the desire to compete. No sooner than Chandler had won his second gold medal at the 2015 SkillsUSA national Graphic Communications competition, he wanted to go to WorldSkills. I have seen Chandler compete in the regional and state competitions. He is calm, cool and collected. He is a mature, focused young man who is passionate about the industry, knows what he wants and is willing to put in the time to get it. After breaking the scoring record at the 2014 national graphic communications competition, he turned around in 2015 and broke his own record.”

“Participating in WorldSkills is not an inexpensive proposition,” Foster continued. “Upon hearing about the cost, we felt that we had to get behind Chandler and raise the money for him to participate in this once-in-a-lifetime opportunity. We started a GoFundMe page (see: www.gofundme.com/2017-worldskills-competition) so that anyone can support his cause.”

Michael Born was Kerr’s printing technologies instructor from the Center of Applied Technology North in Severn, Md., and was chosen to be the technical expert for the Print Media Technology WorldSkills Competition. When asked about Kerr, Born said, “I first met Chandler when he walked into my class as a thin, gangly freshman. He was a friendly kid with a winning smile and laser focus. He seemed to enjoy the four-week career exploration class, and I was excited to see him on my roster for his sophomore year. He was a leader in the classroom and really excelled in every aspect of my class. In 2014 and in 2015, he competed in the regional, state and national competitions and won gold in all. His dedication and work ethic sets him apart from everyone else. He is the hardest-working student I've taught. He continues to be a leader for my program and the school by volunteering as a guest speaker, participating in our annual open house and judging skills competitions.”

In the WorldSkills Print Media Technology contest, working under time constraints, competitors will produce a number of different products on both offset and digital presses. The printed product must be finished by trimming with a paper cutter, folding it with a folder and binding it with a simple binding machine to specified dimensions. Points are awarded to those who check for consistent quality and who clean up after the print run is complete.

There are 11 members on the SkillsUSA WorldTeam. Other occupational areas in which the United States plans to compete include Automobile Technology, Bakery, Bricklaying, Hairdressing, Mechatronics (two-person team), Plumbing and Heating, Refrigeration and Air Conditioning, Web Design and Development, and Welding.

In 2017, more than 1,300 competitors will test their skills in Abu Dhabi. Considered “the best of the best,” contestants compete for four days in 51 occupational skill areas from economic sectors including manufacturing and engineering technology, information and communication technology, construction and building technology, transportation and logistics, creative arts and fashion, and social and personal services. Accompanied by their teachers, trainers and industry technical committee experts, these young people compete before the public in contests that are run and judged by industry using demanding international standards. The competition brings together young people from around the world in their chosen professions. They represent the best students selected in local and national skills competitions for professional education.

Five thousand international experts, delegates and judges will gather from around the world, and 3,000 volunteers will be recruited to assist in the competition. A total of 100,000 student and public spectators will attend the competition at the Abu Dhabi National Exhibition Centre (ADNEC). For more information about the competition, go to: https://worldskillsabudhabi2017.com/en/.

Unlike other national teams in the WorldSkills Competition, the SkillsUSA WorldTeam is funded solely through private donations. To provide funding or donate in-kind support, go to: www.skillsusa.org/competitions/worldskills/donate-to-worldteam/.