Xerox is staking a fresh claim to the cut-sheet side of the production inkjet market with the Baltoro HF Inkjet Press, a device it introduced at a customer event in Rochester, N.Y., on June 26.

Baltoro HF is not the first cut-sheet inkjet press launched by Xerox. But, it is the press that the company is counting on to establish itself as a credible and competitive inkjet solution provider for high-volume transactional work as well as high-quality direct mail, catalogs, books, and commercial print.

Baltoro HF is the first iteration of a press platform that combines new, Xerox-developed technologies with tried-and-tested features from the iGen family and other successful products. During the event, held at the company’s Gil Hatch Center for Customer Innovation in Rochester, Xerox spokespersons explained the rationale behind Baltoro HF’s development and stated why Xerox believes it will win the market acceptance that the company began pursuing with its previous cut-sheet inkjet offering, the Brenva HD Production Inkjet Press.

Marybeth Gilbert, VP Production Inkjet Business, noted that Xerox has been an inkjet developer for a long time, holding patents in inkjet technology even before it had inkjet presses to sell.

Initially, said Gilbert, Xerox focused its inkjet strategy on transactional print. The question now becomes, “how do you grab those offset pages” from additional applications that could benefit from migrating to production inkjet.

With Baltoro HF in the portfolio, she continued, Xerox will accomplish it by offering printers three Vs: more value at higher volumes with sustained velocity.

She said the addition of Baltoro HF gives Xerox “the most comprehensive portfolio” of production inkjet systems along with the Xerox Rialto 900 MP roll-to-cut-sheet inkjet press and three versions of the Xerox Trivor 2400 continuous-feed inkjet platform.

Xerox is at a “tipping point” of its inkjet strategy, according to Steve Welkley, Vice President, Production Inkjet Sales. He explained that while inkjet is a potentially game-changing technology, the first production inkjet devices were “out of reach” to all but a few printers because of their cost, high-volume duty cycles, and physical dimensions.

Now, said Welkley, Xerox is out to make inkjet “accessible, available, and affordable” to the mainstream of the industry with a platform built “from the ink out” for economical production and simplified operation and maintenance in a compact footprint. 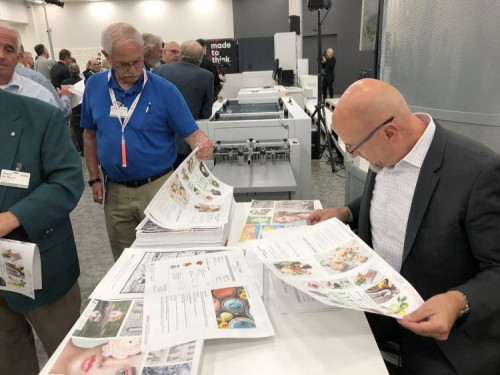 Xerox’s High Fusion Ink eliminates the need for primers and precoats on the stocks that the Baltoro HF is designed to handle: uncoated plain, inkjet treated, and coated papers, including commodity offset coated papers.

Chris Irick, Worldwide Product Marketing Manager, Entry Production Inkjet, opened a technical overview by confirming that Baltoro HF and the Xerox Brenva HD Production Inkjet Press, a cut-sheet device launched at drupa 2016, will not coexist. He said that Brenva, no longer being sold as new, “will take stage left” as Baltoro HF succeeds it as Xerox’s cut-sheet inkjet product offering.

But Irick added that Xerox is “building on Brenva” in the concept of Baltoro HF, which also draws upon the heritage of the iGen cut-sheet EP platform. Like Gilbert, he stressed the advantages of Baltoro HF’s “end-to-end, single-vendor design,” in which virtually everything inside the box comes from the same OEM.

Irick declared that thanks to Baltoro HF’s high-speed, no-primer, direct-to-media capabilities, the traditional printer’s triangle of price, quality, and service “is effectively dead” as the press enables users to focus on the value of inkjet production instead.

Irick cited Baltoro HF’s “class leading print width” of 13.76˝ and noted that the press can be up to 115% more productive than competitive systems when printing legal-sized documents, 2-up simplex, on 17x14˝ long-edge media – a capability he called unique to Baltoro HF. (Maximum image area is 13.76x20.25˝.)

He also explained an asset called “Clear Pixel Plus with Deterministic Technology”: essentially, a randomizer that keeps pixels from becoming clumped visibly together. When the Baltoro HF’s High Fusion W-Series piezo drop-on-demand print heads fire to make up for missing bursts from defective heads, Irick said, the real-time adjustment is automatic, and “the compensation is imperceptible.”

Addressing the printing speed of the press, Irick noted that it can be as fast as 300 impressions per minute (ipm) when running 151 11 x17˝ simplex sheets or 75 duplex sheets per minute, two-up. The ability to feed long the edge, he added, means that legal-size documents can print at the same speed as letter work. (The 300 ipm capability, although built into the press, requires a license to unlock. Without activating it, the Baltoro’s top speed is 182 ipm, according to Irick.)

In all jobs, the press prints with Xerox’s High Fusion Ink, formulated to eliminate the need for primers and precoats on the stocks that the Baltoro HF is designed to handle: uncoated plain, inkjet treated, and coated papers (including commodity offset coated papers) on the device’s tested substrate list.

In the Baltoro HF, the ink will be set by a compact, near-IR drying system. The press, available with up to four two-tray sheet feeding modules, can be expanded by adding a second high-capacity capacity stacker, an inline Tecnau dynamic perforator, an inline perfect binding unit from CP Bourg, and other finishing modules. 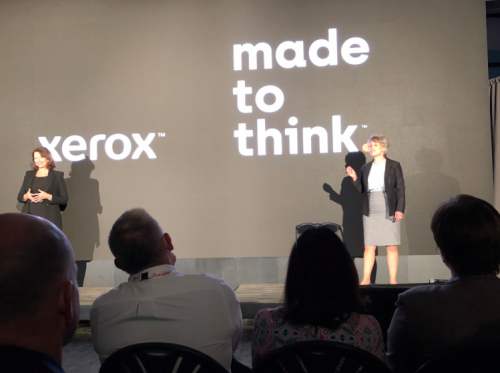 In a question-and-answer session, Gilbert said that orders for the Baltoro HF are being taken now at a price comparable to that of the Océ VarioPrint i300 cut-sheet inkjet press.

Gilbert also explained that in positioning the Baltoro HF as an “entry level class” inkjet press, Xerox is referring not to price point or footprint but to average print volume: in Baltoro’s case, a recommended output of 750,000 to 3 million sheets per month. At this intended level of use, she said, “America is on fire for cut-sheet inkjet.”

The Brenva-to-Baltoro transition is proceeding now that Xerox has sold out its existing inventory of the older device, according to Gilbert, who added that the company has a queue of Brenva users who want to adopt the new press. She emphasized that the Baltoro HF is the first example of what is to come from the Baltoro platform – a combination of advanced technologies in which users can invest with confidence.

Gilbert said that expanding the Baltoro HF’s CMYK gamut is “low on the demand list” among potential customers, although MICR for transactional work “is always an ask” and potentially could be added.

As for the press’s distinctive brand name, Gilbert revealed that “Baltoro” also designates the glacier and mountain range in Pakistan leading to K2, the world’s second-highest mountain and the peak considered the most technically difficult to climb. “Baltoro” thus signifies the inkjet market challenges Xerox believes it can overcome with the Baltoro HF’s unique combination of value, volume, and velocity for cut-sheet production.

For now, declared Irick, “we are alone in this space” thanks to Baltoro HF’s High Fusion engine and inks, long-edge capability, image controls, high print resolution, fast running speed, and productivity features ported over from other platforms.