Xeikon Café N.A. Serves Up Food for Thought in Toner and Inkjet 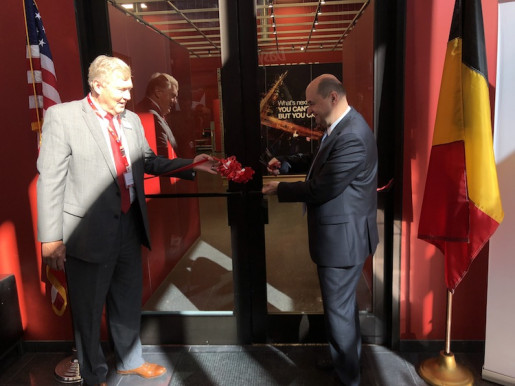 Xeikon has been building and selling digital color presses since 1993, and that means no other vendor has served the color digital print equipment market longer. Like its principal rivals, Xeikon uses a variety of methods to promote what it offers and to share its view of where it thinks the market is headed.

The outreach includes delivering the message straight to customers in invitational events that function both as business conferences and as partnered mini-expos for Xeikon presses and systems and equipment that support them.

Xeikon Café, as the company calls these proceedings, has been hosted annually at Xeikon’s headquarters in Lier, Belgium, for the last three years. Xeikon Café now has a North American edition, the premiere of which took place from Oct. 17-18 at and in the near vicinity of Xeikon’s new demo and technical facility in Itasca, Ill.

About 175 people, mainly Xeikon customers and prospects, took part in the program, which also featured tabletop exhibits by about 30 Xeikon partners. Xeikon personnel used the occasion to highlight the company’s technological prowess, discuss its marketing strategy, and outline the kinds of support it offers users of Xeikon presses.

Benoit Chatelard, who became the company’s CEO in May, said there are “very few companies on the planet” that have advanced dry-toner electrophotography to the point that Xeikon has.

That process drives most of the more than 1,000 Xeikon print engines installed worldwide, about 50% of which are label and packaging presses. Electrophotography is now complemented by UV inkjet for label printing - a combination, according to Chatelard, that signals the technology-agnostic approach Xeikon is taking toward product development for the continuous-feed equipment market.

Agnostic, however, isn’t the same as all-encompassing. Xeikon doesn’t build cut-sheet devices, and it recently canceled Trillium, a liquid-toner development project. A liquid-toner press dubbed Trillium One was shown at drupa 2016, but Chatelard said Xeikon suspended the initiative when it determined that the process wouldn’t satisfy the “TQC triangle” of time, quality, and cost benchmarks the company has set for all of its products.

The Xeikon portfolio includes presses for label, folding carton, and commercial printing applications; Fusion, a press platform that combines digital printing with digital embellishment; converting and finishing equipment; digital front ends and software; toner; and a variety of support services. Graphic arts, labels, and packaging are the broad areas of strategic focus, each consisting of a number of product segments in which Xeikon wants to demonstrate leadership.

The company aspires to be “the go-to advisors and technology providers in our chosen segments,” said Chatelard. This will require Xeikon to “master” inkjet technology by building on the steps it has taken with the launch of the Xeikon PX3000, the UV inkjet label press. To this end, Chatelard said, Xeikon will establish an “inkjet competence center” in Lier that will concentrate on integrating the best available inkjet technologies into Xeikon products.

Although inkjet is an important addition to the portfolio, the rollout of new solutions over the next three to five years will continue to emphasize dry-toner electrophotography. According to Chatelard, people who say “inkjet is everything” are incorrectly writing off toner printing as a process that has no further improvement ahead of it.

“We are not at the end of this technology,” he declared, noting that there’s still opportunity to make dry-toner presses print faster on wider webs for a greater range of applications.

Although Chatelard admitted that “we have work to do” in terms of building U.S. market share, the company appears to be solidly positioned to carry out its plans. He said that as a division of the Flint Group, which acquired Xeikon in 2015, the company enjoys “gigantic access” to its target markets and also benefits from its parent’s renewed commitment to advancing inkjet technology.

Dave Wilkins, VP of marketing and sales, Xeikon America, reported that sales in North America, evenly split between label and commercial installations, reached a record last year and are on track to do the same in 2017. He noted that investment has been vigorous on the part of direct mail and commercial printers like the large Northeastern plant that has purchased three Xeikon 9800 commercial presses to produce its high-quality digital work.

Wilkins said that last month’s Labelexpo Europe event saw the launch of two presses he called “perfect for the U.S. market:” the aforementioned Xeikon PX3000 UV inkjet label press and the Xeikon CX500, a dry-toner press aimed at the self-adhesive label market. Discussing them in detail was Filip Weymans, the company’s vice president of marketing. 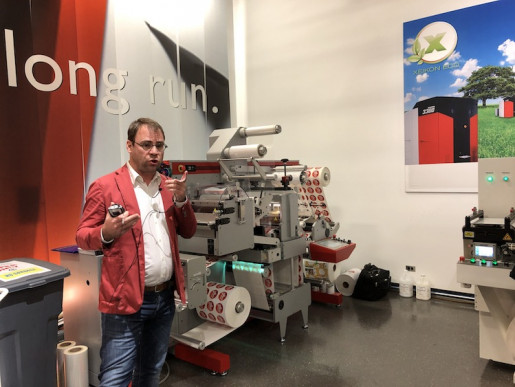 Filip Weymans leads a tour of the Xeikon Innovation Center, which features finishing equipment, as well as toner and inkjet presses.

The Xeikon PX3000, announced at the European edition of Xeikon Café in March, is the first press in Xeikon’s Panther series of UV inkjet presses. The simplex device prints substrates up to 13" wide at a top speed of 164 feet per minute in CMYK plus opaque white. Resolution is 600 x 600 dpi.

Among the Xeikon PX3000’s innovations, Weymans said, is the way it pairs LED UV emitters with standard UV lamps to set the PantherCure UV inks it prints with. “The little touch of mercury” from the standard lamps assures consistent curing in the wet-on-wet printing sequence the press uses, he explained. The platform also will be available in a narrow-web (8" wide) format as the Xeikon PX2000.

Offering a step up to 20" wide production is the Xeikon CX500, a press on a new platform in Xeikon’s Cheetah dry-toner series. Its credentials include a top speed of 98 fpm, a resolution of 1,200 dpi, and a 5/0 color configuration that supports spot colors and security toners as well as opaque white.

Weymans described the Xeikon CX500 as 57% more productive than the Xeikon CX3, its 13" sibling in the Cheetah family. Intended applications for the 20" device include self-adhesive labels for large items such as oil cans. Weymans said that because its toner is food-safe, labels for edible products can be run with confidence on the device as well.

The Xeikon PX3000 label press can be seen at the Innovation Center that Xeikon has opened in Itasca as a showroom, materials testing facility, and training site. Displayed with it for the graphic arts and folding carton segments, respectively, are the Xeikon 9800, a 20" single-pass duplexing press; and the 20" Xeikon 3500.

Also installed are examples of the supporting pre- and postpress devices that Xeikon bundles with its presses in integrated “suites” of hardware for books, documents, labels, wall coverings, and other specific applications. Besides getting to know the machinery, visitors to the center can also learn more about Xeikon’s self-developed X-800 digital front end and workflow software, designed to control RIPping, color management, and other key functions on all Xeikon press equipment.

Weymans acknowledged that the richness of the Xeikon portfolio notwithstanding, “digital can be a provocative technology, and change is not something that everyone embraces.” This is why the company has created aXelerate, a table of technical and business services aimed at helping customers get the most value from their investment in Xeikon solutions. aXelerate starts with setup and basic training upon installation and can proceed to in-depth consultation about production efficiency, cost calculation, application development, and other subjects.

Briefings by the host company were far from being the only items on the agenda for attendees at Xeikon Café’s first showing in North America. The bulk of the program, in fact, consisted of presentations from industry cognoscenti engaged by Xeikon to review the state of the digital print market and to point out the best ways for printers to prosper in it. Among the highlights:

Joseph W. Webb, Ph.D., print industry economist and co-author of the recently published The Third Wave, urged the audience to remember that as print volumes continue to shrink, print service providers must swap backward-looking job-shop mentalities for a “preactive” stance that focuses on developing new, problem-solving solutions for customers.

In overviews of the commercial, in-plant, label, and packaging markets, Mark Hanley, president of IT Strategies, reminded attendees that inkjet still has things to prove as a production technology and shouldn’t be thought of as the digital printing method that will sweep all others before it. No “inkjet revolution” has yet occurred, he said.

Barb Pellow, group director at Keypoint Intelligence / InfoTrends, moderated panel discussions on digital print market opportunities and digital packaging as well as the one on branding.

Xeikon Café North America is planned to return next spring.