Worzalla Announces Winner in the 'Name That Press' Competition 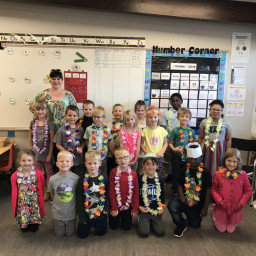 The Polar Ex-Press, submitted by Teresa Jessee’s first-grade class at Washington Elementary in Stevens Point, received the most votes in Worzalla's "Name that Press" competition.

Worzalla, an employee-owned printing company specializing in high-quality custom products including popular children’s books and movie tie-in books, announced that The Polar Ex-Press will be the name of its new printing press. The Polar Ex-Press, submitted by Teresa Jessee’s first-grade class at Washington Elementary in Stevens Point, Wis., received the most votes in a round of public voting after being selected as one of three finalists from more than 50 entries.

“In light of the challenges our community and our country are facing right now, we were pleased to have this competition to inspire students’ imaginations and virtually bring the community together,” said Jim Fetherston, President and CEO at Worzalla. “We thank all the students and classrooms who participated in the Name That Press Competition and the community members that selected The Polar Ex-Press as the winner.”

More than 1,600 votes were cast in the Name That Press Competition. The final vote tallies are as follows:

Originally, Worzalla stated that the classroom that submitted the winning entry will be awarded a pizza party and a $250 donation for supplies for their classroom. Worzalla will still be awarding the $250 donation to Jessee’s classroom, but also will be awarding $100 to each runner-up classroom. All students of the three finalist entries will also receive a goody-filled bag of items from Worzalla and Heidelberg, the maker of the printing press. Worzalla will coordinate with Jessee’s class to organize a tour and pizza party at a later date.

“We hope to spread a little joy for many area students and families as they work to navigate each day’s changes and challenges related to the coronavirus pandemic,” said Fetherston.

As announced last year, Worzalla is in the process of executing a modernization and expansion plan that will add 50,000 square feet to Worzalla’s manufacturing headquarters, upgrade equipment, and hire additional associates. One of the equipment upgrades was the addition of a new Heidelberg 106 press and is now fully operational. This is the press that will now be known as The Polar Ex-Press.