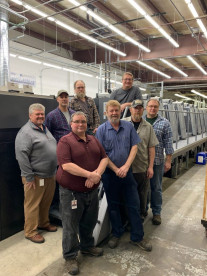 Worzalla, an employee-owned printing company headquartered in Stevens Point, Wis., is in the midst of a three-part expansion plan consisting of adding 50,000 sq. ft. to its print shop, hiring additional associates, and upgrading equipment – including a Heidelberg Speedmaster XL 106-8P+L. Specializing in children’s books, cookbooks, and coffee-table books, Worzalla expects that the new XL 106 with UV will increase capabilities and capacity by 30% due to the new technology on the press — such as “Push to Stop.”

“Children’s and coffee-table books are exploding,” said Jim Fetherston, president and CEO of Worzalla. “In order to keep up with this huge demand, we needed to put a plan together to partner with this growth. The new Speedmaster was a critical part of this plan because it will give us additional capacity to allow us to take in more jobs. It’s a very exciting time for our company.”

Running next to Worzalla’s existing Speedmaster XL 106-8P, the new eight-color Speedmaster XL 106 with UV is creating new capabilities for the company to offer customers. According to Fetherston, “It’s important for books – especially books we specialize in – to have a cover that sets them apart from the rest. The inline UV will give us new enhancements for our customers at extremely fast turnaround times.”

The Speedmaster XL 106 is equipped with Push-to-Stop technology, which allows jobs to be autonomously changed over without operator intervention. The Push-to-Stop technology is made possible with Prinect workflow in combination with Intellistart 2, a unique integrated software system for effective job preparation, which greatly reduces the number of operating steps during a job change.

To keep up with the high quality that Worzalla’s customers expect, the Speedmaster XL 106 has Prinect Inpress Control 2, which handles even the most complex color critical job changes at the fastest speeds possible. This technology helps deliver the first measurable result in less than 60 sheets and in under a minute. Shorter makeready times are also achieved thanks to reliable and fully automatic plate changes with AutoPlate Pro, which controls precise plate feeding and identification for exact and fast registration. During plate changes, the operator can perform other tasks while the plates are being changed.

“The technology on the XL 106 definitely helps us utilize our operators better by making their jobs more efficient – allowing them to focus on other jobs. It’s also giving us a chance to increase our revenue thanks to the 30% additional capacity we expect from the press,” said Fetherston.

Folder and Press Made for Each Other

Both Speedmasters are partnered alongside a long list of Heidelberg equipment and products including Saphira Consumables, two high-speed POLAR cutters, and a Stahlfolder TH-82-P – another recent purchase from Heidelberg. Running 16,000 sheets per hour, the new Stahlfolder can keep up with Worzalla’s Speedmaster thanks to the additional technology on the folder. One of these new technologies includes the ability to feed sheets in an overlapping sheet stream with the PFX pallet feeder.

According to Fetherston, “It’s crucial to have postpress equipment that keeps up with our presses. If we don’t have fast folders, that makes us have slower turnaround times. Thankfully, the folder and press work very well together.” 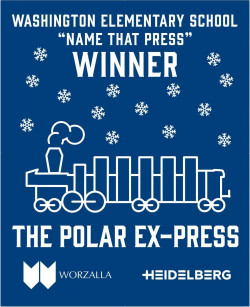 Bringing the Community Together Through Printing

To celebrate the new XL 106, Worzalla launched its “Name That Press” competition, where the company received 50 entries from 12 local schools. After rounds of voting, “The Polar Ex-press” was the winning name of the Speedmaster XL 106. Submitted by Teresa Jessee’s first grade class at Washington Elementary in Stevens Point, Wisconsin, the class will be awarded with a $250 donation as well as goody-filled bags from Worzalla and Heidelberg, a tour of the facility, and a pizza party at a later date. The runner-up will receive a $100 donation, and both the runner-up and third place winner will receive goody-filled bags from Worzalla and Heidelberg.

“In light of the challenges our community and our country are facing right now, we were pleased to have this competition to inspire students’ imaginations and virtually bring the community together,” said Fetherston. “We thank all the students and classrooms who participated in the ‘Name That Press’ Competition and the community members that selected ‘The Polar Ex-Press’ as the winner.”