Worzalla Honors Chuck Nason, Longtime CEO and Chairman of the Board, With Statue Installation

Worzalla, an employee-owned book printer specializing in printing high-quality children’s books, cookbooks, and hard-cover best sellers, is honoring the legacy of former CEO and Chairman of the Board of Directors, Chuck Nason. Nason led Worzalla for nearly four decades, 30 years as CEO and an additional 10 years as non-executive Chairman of the Board. 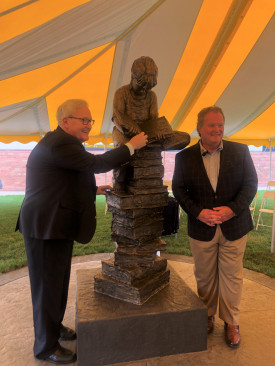 To honor Nason’s contributions to the company, Worzalla commissioned a statue titled “New Heights of Knowledge – One More Chapter!” which depicts a young girl sitting on top a stack of books, reading and dreaming. Sculptor Gary Lee Price describes his work as “youth at its best: studying, pondering, learning, with the stack of books representing the higher levels of learning and understanding.” The sculpture was installed near the company’s entrance where it can be easily viewed by employees as well as members of the community.

“Chuck deserves all the credit for growing Worzalla into the well-respected book printer that it is today and for driving Worzalla’s support for literacy in our local community and across the country,” said Jim Fetherston, President and CEO at Worzalla. “We are thrilled to honor his decades of leadership and service to the company, and we wish him all the best in retirement.”

“Chuck is a world-class individual and an exceptional business leader; it has been a pleasure to work with him on the Worzalla Board of Directors,” said Bernie Patterson, a member of the Worzalla Board of Directors and recently retired Chancellor of the University of Wisconsin-Stevens Point. “Chuck consistently walked the walk when he talked about taking care of his customers, his employees and his community.  His longevity and the success of Worzalla is a testament to his leadership.”

Worzalla was founded in 1892 by brothers Joseph and Stephen Worzalla originally to print a Polish newspaper. Around the time of World War II, the company expanded its business into book printing and binding. By the 1970s, the book printing and binding part of the business had become Worzalla’s main focus. When demand for Worzalla’s services became more than the company could handle, Worzalla was sold to investors in Chicago in 1984. However, a financial audit later revealed that these investors were not properly handling Worzalla’s finances and the company was at risk of failing even though business was prosperous.

Nason joined Worzalla in 1981 as its CEO. When he and other company leadership learned of the financial issues, Chuck organized an employee buy-out from the investors to take back control and transition Worzalla into an employee-owned company. After the successful buy-out in 1986, children’s book printing took off and became a major part of Worzalla’s business. Nason is credited with driving a tenfold increase in revenues from 1990 to 2009 by developing key relationships with some of the most notable book publishers in the industry, fueling multiple expansions of the business.

Nason eventually retired in 2011, but still retained his position as Chairman of the Board to offer his support to the company as Jim Fetherston transitioned into the role of President and CEO. Nason stepped down from his role as Chairman in August 2020, and afterwards, Fetherston was elected to head the Board of Directors.

“I spent my time at Worzalla working with the greatest bunch of people. During my time, we took the wonderful company the Worzalla family turned over to me, and we had some ideas that only came to life because of the work of all its employees,” said Nason in his remarks at the event honoring his legacy. “I am so thankful that what we have been working hard to put together will stay standing for many years to come. You don’t get here without working with such a wonderful group of people. Worzalla is here for a long, prosperous road ahead.”