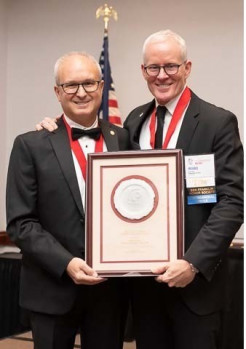 PITTSBURGH - November 19, 2018 - Printing Industries of America is pleased to announce that Jeff Ekstein has been named the 2018 Lewis Memorial Lifetime Achievement Award recipient. Established in 1950, the Lewis Award pays homage to business leaders who have made major, long-term contributions to the graphic arts industry and have been a significant force in shaping the business of printed communications. The award was presented on November 9, 2018 at the Ben Franklin Honor Society Award Dinner during the Fall Administrative Meeting of Printing Industries of America in Grapevine, Texas.

As a third-generation owner of 65-year-old Willow Printing Group, Ekstein has helped shape both the company and the commercial printing industry with his strong drive and entrepreneurial spirit. As President and CEO, he has led the company through a number of strategic acquisitions as well as business model evolutions. Ekstein attributes Willow’s continued success to its singular focus on helping its clients achieve their desired results by providing customized solutions while making each project run seamlessly and smoothly.

He has served Printing Industries of America (PIA) for more than a decade. Ekstein has served on the PIA Board as a director, advanced to the officers’ ranks in 2011, and was ultimately named Chairman of the Board in 2013. Additionally, he has served on countless committees and task forces. He was the Education Committee chairman from 2009–2011, he is currently a PIA Finance Committee member, and he serves as a judge for the Premier Print Awards, the largest print competition in the world.

Ekstein carries his volunteerism into fundraising for various charities and was included in the top fundraising category in the Heart and Stroke Foundation’s “Ride for Heart” and CCC’s (Crohn’s and Colitis Canada) “Gutsy Walk.” He and his wife Linda enjoy as much quality time as possible with their three children Carly, Arlen, and Alexandra and son-in-law Gil.

Please join Printing Industries of America in congratulating Ekstein on this tremendous and well-deserved achievement. More about the Lewis Memorial Award can be found at www.printing.org/lewis.

The Powerful Case for US Book Manufacturing