Of all the UV press conversions that Keith Kuebelbeck has handled in his career, the retrofit of the LUV 80 LED systems from IST America onto Park Printing’s six-color, 64˝ KBA Rapida 162 sheetfed press went the smoothest he can remember. 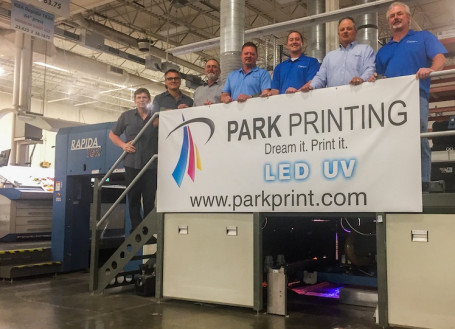 At Park Printing in Minneapolis, production manager Keith Kuebelbeck is no newcomer to UV printing — he has been retrofitting UV curing units onto offset equipment for 25 years and has built up a considerable knowledge base in the UV field. LED-UV technology is his and the company’s latest move in this direction, and they have taken the step with a giant stride by adding LED-UV capability to a large-format sheetfed offset press.

The press is a six-unit KBA Rapida 162, a machine with a maximum sheet size of 47x64˝, an aqueous coater, and combination hot-air and infrared drying. It can now print and coat UV, and conventional, jobs, thanks to the installation of a pair of LUV 80 LED systems from IST America.

The main advantage, says Jeff Gray, VP of operations, is that the company now has a way to handle the overflow from its flatbed inkjet devices, which have seen a sharp increase in volume recently. But, it’s not simply a case of the offset press backstopping the inkjet printers.

Gray notes that jobs taking hours to print on the flatbeds can be run in much less time, with full offset quality, on the 13,000 sph Rapida 162. This increase in efficiency has opened the way to producing high-end color books and other high-value applications that Park Printing couldn’t offer before its embrace of LED-UV.

The LUV 80 units were installed in May and became fully operational by the end of the month. Since then, according to Kuebelbeck, 10% to 15% of the Rapida 162’s workload has consisted of jobs with UV inks and coatings — a share that he expects to go up as more work migrates from the flatbeds and as new market opportunities arise.

Near-instantaneous drying is the main attraction of all UV printing systems, but LED-UV printing appeals to Park Printing for more reasons than that. LED-UV inks and coatings, says Kuebelbeck, have been catching up with the performance of offset fluids over the last few years and are being priced more competitively as increasing numbers of printers try them.

The relatively low curing temperature of light-emitting diodes is also easier on substrates and critical press components than the high heat of standard UV lamps. This strongly influenced Park Printing’s decision to adopt an LED-UV solution, Kuebelbeck reveals, as did the fact that the LUV 80 units draw 70% less power than standard UV lamps, contain no mercury and generate no ozone. The inks and coatings produce zero VOC emissions.

Operating at a wavelength of 385 nanometers, LUV 80 is a water-cooled system that uses proprietary lenses to optimize the output of LED-UV energy on the surface being printed. Designed for energy efficiency and long life, the LEDs can function for more than 20,000 hours before needing to be replaced, according to the manufacturer.

Park Printing’s KBA Rapida 162 features a pair of LUV 80 units: one in a dedicated docking station in the delivery; and another that can be positioned after the second, fifth or sixth press unit, or just ahead of the delivery for a total of four possible combinations. Turning the press into an LED-UV/conventional offset hybrid also included installing rollers and blankets that could handle both types of inks and coatings.

Park Printing had been researching the option of LED-UV curing for some time, notes Bill Bonallo, VP of operations at IST America. “We worked closely with them to tailor a solution that would be right for the press and for the applications they wanted to produce on it. In this way, we were able to give them the full benefit of the experience IST has gained in installing more than 13,000 UV systems worldwide.”

Kuebelbeck adds that Park Printing chose IST Americas as its LED-UV supplier because of its strong reputation in the industry and its locally-based parts and service operations. He declares that of all the UV press conversions that he has handled in his career, the retrofit of the LUV 80 units onto the KBA Rapida 162 is the smoothest he can remember. “It looks factory installed,” he says.