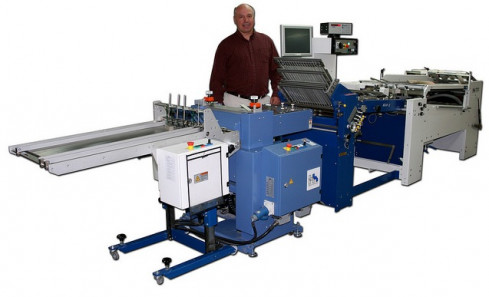 PHILADELPHIA — April 25, 2017 — Western Printing announces that is has finished more than 5 million pieces since the installation of its powerhouse MBO KL 112 miniature folding unit in August 2016, through the end of the year, with more work finished on it since the beginning of 2017. This particular piece of MBO technology is designed for the production of finishing small products, specialty work, and thin paper sizes.

With fold rollers that are 26 mm in diameter, the KL 112 folder can handle folding lengths down to 18 mm. As many as 16 fold plates can be installed on the unit, which allows Western Printing to fold large sheets down to specifications associated with inserts. The KL 112 that Western Printing has installed is also equipped with a special glue application system in order to apply glue along the spine when folding signatures.

Western Printing was founded in 1929 and has been an MBO customer for 20 years. The company produces brochures and signature folding, and has evolved into offering more complex multiple panel folds and glue bonding books.

Jeff Rohrbach, Production Manager, Western Printing, says, "Our focus at Western Printing is squarely on the customer. Many companies may claim that, but we truly go out of our way to make sure that our customers are on the cutting edge and, most importantly, are satisfied. The adoption of MBO technology has helped move that philosophy along."

Rohrbach says that, as the company began to evolve into doing more miniature and leaflet folding and multiple panel map folds, the company needed a folder that would give them more capacity; and that size became a bigger issue, with the need for more plates.

"The MBO KL 112 gave us the ability to do more folds per sheets and a variety of fold patterns," Rohrbach says. "The number of plates was also very attractive to us. The technology allows us to meet demands and fulfill our capacity issue. We had the work, but were looking for a more efficient way to produce it. The MBO KL 112 helped us fill that gap."

Added Capabilities with the Use of MBO Gluing Feature

Western Printing opted to add the gluing capability to the KL 112, as the operators were very satisfied with another piece of MBO equipment, the B21 buckle folder, which has gluing capability.

"When we purchased the KL 112, we specifically wanted segmented rollers and purchased the exact same gluing devices as we have on the B21 so that we have identical gluing systems," Rohrbach says. "This gave us more gluing capacity, which has become a bigger part of our business. Because of the size, the KL 112 allows us to do glue bond books in smaller formats — both in overall capacity and physically smaller sized booklets."

Rohrbach concludes, "We have definitely seen significantly more efficiency and production rates going up since the adoption of the MBO KL 112 new machine, and have produced almost 5 million pieces on the machine from August 2016 until the end of last year. We've done even more since the beginning of 2017. We are on track to continue in this upward direction.

"As folds continue to get more complicated, and as more information is being printed on booklets now, we are now equipped with the best technology to give us the ability to continue to grow."