Vivid Impact is a leading innovator in the graphic communications industry that delivers valuable, strategic solutions to its customers while maintaining superior quality control standards. Based in Louisville, KY, the company partners with clients to offer an omnichannel approach, executing creative, customer-driven programs that exceed expectations.

Management strives to build a company of engaged, empowered team members who take ownership of their work and deliver greater value to clients. The company is actively building a workplace culture where people seek to work. Vivid Impact is quickly becoming known in the industry for supporting and treating employees like family. This approach results in long-term client relationships and award-winning, well-branded, visual communication campaigns.

Vivid Impact knew it needed to invest in a new hybrid, wide format printer. Their older hybrid had dated technology, and it broke down a lot. While researching three popular manufacturers, the Vivid Impact team became aware that Agfa had an offering worth investigating.

“Ever since I started talking with Agfa, it was just a different type of sales experience for me,” states Brandon Boyers, the chief manufacturing officer at Vivid Impact. “Everybody was trying to do the same thing with their hybrid press, but Agfa had already been doing it for five years and had it all figured out. It didn’t feel like I was trying to be sold on the press; it felt like the Jeti Tauro was selling itself.”

The Jeti Tauro H3300 UV LED produces flat sheets and roll-fed work with vibrant quality and extreme productivity. This hybrid offers detailed prints up to 3.3 m wide at speeds up to 453 m2/h (4,876 ft2/h). It is a heavy-duty, ruggedly built workhorse that easily handles heavy workloads, multiple shift operations, and 24/7 printing.

“We are printing three times faster with top-notch quality,” adds Boyers. “The added production capacity means we can quickly get the product to market. Without the Jeti Tauro, we wouldn’t be able to support the number of customers that we have today. We’re looking into purchasing more finishing equipment to keep up with this printer.”

The Jeti Tauro has helped Vivid Impact expand business in the liquor, healthcare, and convenience store segments. The company opted for a six-color plus white ink configuration on the Jeti Tauro to optimize the production of window clings for their C-store customers. The system easily outputs on transparent media for reverse print and sandwich printing.

“Running clear media is much more efficient,” notes Boyers. “The old system required three different files to produce clings. The Jeti Tauro only requires one file and prints it all at one time. We can double production by running two rolls at once.”

The master roll-to-roll option on the Jeti Tauro H3300 LED enables high-volume print runs of larger rolls and the ability to print two rolls at one time. Its dockable roll-to-roll allows easy change-over to rigid printing when needed and reduces media waste.

Litho quality on any substrate

According to Boyers, a significant difference he’s seen since installing the Jeti Tauro is that the sales team has the confidence to sell more products than ever. They appreciate the Jeti Tauro for its ability to produce exceptional print quality on almost any basic, untreated corrugated media rather than specially coated C-flute. “They saw no discernable differences when comparing a test print,” he explains. 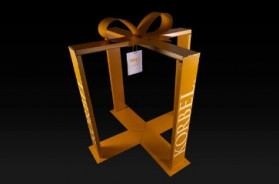 “Our main priority is to make the customer happy,” states Jen Von Almen, the wide-format on-demand leader at Vivid Impact. “By meeting their deadlines, we’ve been awarded more work because we can turn it around faster. It’s a game-changer. The rolls are running so much faster on the Jeti Tauro. We print corrugated C flute and B flute at a higher rate too.”

About 30 percent of the company’s work is corrugated cardboard printing. Recent work includes custom folding cartons and value-added packaging for the spirits and healthcare industries. The Jeti Tauro’s sturdy build, the extended vacuum zone, and media guides make it especially suited for corrugated and package printing.

“Some of the cooler things we create are liquor store displays. We produce a lot of cardboard POP that is designed in-house. One customer came to us and wanted a basketball hoop display for a March Madness campaign. We took that idea and ran with it. We built a full display out of corrugated cardboard and incorporated a real metal basketball rim onto it. It looked like a real basketball hoop customized with the liquor store’s branding. All of it was executed in-house. The actual structural engineering design was done in-house. The creative design for the graphics was done in-house, and then it was printed, packed, and fulfilled in-house.” 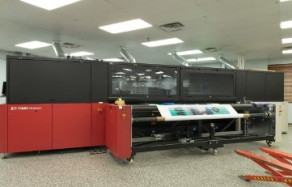 “Dealing with Agfa has been a much more pleasant experience than we had in the past with some other vendors,” explains Boyers. “From the sales cycle to the installation to the service support, the Agfa team keeps their promises, and quite frankly, the press is living up to everything they told us it would do. Agfa is easy to work with; the whole process has been easy.”

Vivid Impact is committed to being a leader in the graphic communications industry by providing a customer-centric approach to developing best-in-class solutions and project methodology that exceeds clients’ expectations. With the Jeti Tauro H3300 LED, Vivid Impact is upping its innovation game and will continue to set premier standards for the industry.