Lessons Learned: A Visit to the Museum Plantin-Moretus in Antwerp

“I am speaking soberly when I own that, of all the printers whose works have ever adorned the literary republic, none, I think, stand upon so broad and lofty a pedestal as Christopher Plantin” (Rev. T. Frognall Dibdin, 1817. p. 151-152) 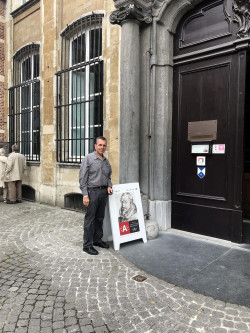 When Christopher Plantin left Paris for Antwerp in the 1550s and set up his printing company, named Officina Plantiniana, his tenacity and business acumen demonstrate that he held lofty expectations. It is unlikely that he could have imagined that the venture he founded would remain a viable business for some 300 years. Then, in 1876, Plantin’s descendant Count Edward Moretus sold the complex which held the printing operation, residences, and libraries to the City of Antwerp. The complex was opened as a museum one year later, beginning over 140 years of public service and museum history (Kockelbergh, 2016).

The Plantin-Moretus Museum is the only museum in the world on the UNESCO World Heritage list, a testament to its importance to the collective interest of humanity. The carefully preserved artifacts and buildings provide rare insight into life and work in the Low Countries of Europe in the 16th and 17th centuries.

In visiting the remarkable museum, and subsequent research into the Officina Plantiniana, it is noteworthy to draw parallels that today’s printing enterprises would be well-advised to consider. Foremost among these is the commitment to quality that began with Plantain and though many of his successors, beginning with his son-in-law Jan Moretus.

The literature is not unanimous in recognizing the Officina Plantiniana as producing work of very high quality in an absolute way. While most of the found published work lauded the level of quality output by Plantin and his successors, such accolades are not universal. 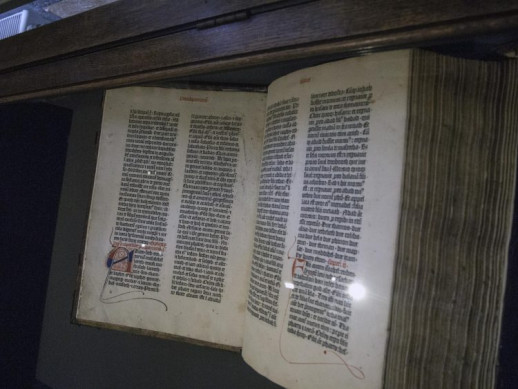 The 36-line Gutenberg Bible is one of the highlights of the collections displayed at the Plantin-Moretus Museum.

For example, De Vinne (1888) sharply notes: “Plantin’s printing was good, but it has been overpraised. He was named “King of Printers” at a time when the duties most admired in a printer were those of editor and publisher…All his books are above mediocrity, but he did not attain the highest rank, either in his arrangement of types or in his press-work” (p. 90) De Vinne subsequently refers to other lesser-known printers in France and the Netherlands whose technical printing acumen surpassed Plantin’s work in terms of text and graphic reproduction and superior editing.

Quality, however, is a multi-faceted construct. In critiques of the quality of the printed output of the Officina Plantiniana, it is safely presumed that De Vinne was looking at quality as being synonymous with excellence. In defining quality for commercial enterprises, many of today’s quality experts, notably Feigenbaum (1991) and Juran & DeFeo (2010), incorporate customer expectations and the concept of value into a more nuanced definition of quality.

While it is recognized the absolute quality of the work by Plantin and his successors can be debated, it is within the customer-centered paradigm of quality that Plantain undoubtedly excelled. Within this framework, Plantin started with a vision, worked with the best available talent, took on ambitious projects, and offered multiple versions of output to satisfy different market segments.

Twentieth-century quality experts cite the need for a quality effort to start with a vision. Plantin adopted the motto “Labore et Constantia” (“Work and Enterprise”) as the guiding credo for his business. But vision and mission statements are hollow words if not backed up. To manifest these goals, Plantin used his business aptitude to turn what was primarily a craft-oriented trade into a full-fledged commercial enterprise. Clair (1960), states: “By then Plantin was not merely a fine craftsman; he was the first great industrialist in the field of printing” (p. 198).

The Officina Plantiniana hired the best craftsmen available to realize the vision of the business (Imhof, 2016). Employing the best talent available to work in his shop was only one part of his success. The quality of the content of his scientific editions was also a critical factor. Plantin persuaded top humanists and scientists to publish through his company. These works are recognized as playing an essential role in the development of Western thought (Voet, 1969). The Officina Plantiniana was renowned for producing quality content, which likely encouraged even more notable scholars to publish through Plantin. De Vinne (1888) notes that Plantin was regarded by the greatest scholars of his day as the “…foremost printer of the world” (p. 22). 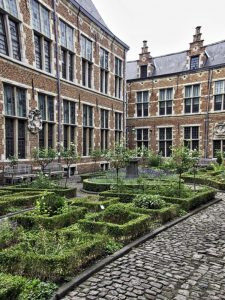 The quality of the typography used in Plantin’s shop was also a key differentiator for his business. Unsatisfied with local artisans, he sought type that would make each project distinctive. He purchased letter sets from the best designers of the day, including Robert Granjon, Claude Garamont, and Hendrick van den Keere (Plantin-Moretus Museum Display Sign, n.d.). To establish a barrier to his competitors, he also purchased the punches and matrices. Therefore, the Officina Plantiniana was the only printer able to produce the unique letterforms (Museum Sign). De Nave (2014) notes that the catalog of type was a printing houses’ most valuable asset and that by 1575 the Officina Plantiniana held the most extensive collection of typography in the world.

Plantain was not afraid of challenging himself with his printed projects. His famous Polyglot Bible best represents such an endeavor. Completed in the early 1570s, the Polyglot Bible is described by De Vinne (1888) as “…a magnum opus in eight monumental volumes and five languages (Latin, Greek, Hebrew, Syriac, and Aramaic)” and “The greatest typographical achievement of the 16th century…” (p. 12). By not shying away from such aggressive projects, Plantin cemented his business as the premier enterprise in a crowded field. 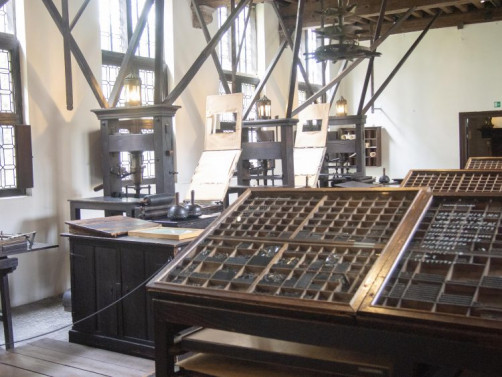 The Plantin-Moretus Museum features some of the oldest presses in the world.

Another notable success factor for the Officina Plantiniana is its approach to offer multiple versions of its printed editions for different market segments. Such an approach is similar to the practice that Alfred P. Sloan used in marketing the automotive conglomeration that became General Motors centuries later (Pelfrey, 2006).

The Officina Plantiniana differed its offerings by several criteria, including quality of paper and type of illustration production. Similar to his search for the best typographers, Plantain was often unsatisfied with local production and often imported paper from Germany and France. This practice allowed him to offer editions in standard, special, and deluxe versions. He even satisfied customers insisting on a vellum substrate when warranted (De Nave, 1988; Voet, 1969).

Further, different methods to produce illustrations were also a hallmark of Plantin’s enterprise. At the time, the only way to reproduce illustrations were though woodcuts and intaglio methods. Woodcuts were less expensive to produce but did not offer the quality of the more expensive engraving methods. The Officina Plantiniana recognized the importance of the quality of illustrations and used these different methods to satisfy varied markets with a variety of printed products and multiple editions (De Nave & Voet, 1989). The quality of illustrations produced reached a zenith in the lavishly illustrated baroque volumes produced under the direction Jan Moretus’ son Balthasar. De Nave and Voet (1989) note that none other than Peter Paul Rubens was employed as an illustrator for the Officina Plantiniana.

It is recognized that Plantin capitalized on the political and religious unrest of his time. Such a practice was dangerous: in 1546 fellow printer Étienne Dolet was burned at the stake for producing heretical printed works (Rodger, 2011). To protect himself, Plantin sometimes used a pseudonym when printing for opposing factors (Plantin-Moretus Museum Display Sign, n.d.).

Today’s printers are well-advised to learn lessons from the Officina Plantiniana in recognizing the importance of quality for commercial endeavors, and by understanding the marketplace as Christopher Plantain and his successors surely did. It is hard to argue with centuries of success.

Authors’ note: The research on this article would not be possible without the assistance and resources of the Cary Graphic Arts Collection in the Wallace Library at Rochester Institute of Technology. Among the collection are many volumes about Plantin and his enterprise, which are cited here. Furthermore, the Cary Graphic Arts Collection includes a 15th-century woodcut block depicting Jesus and the Apostles. Although this particular piece cannot be specifically linked to the Officina Plantiniana, it is certainly representative of the types of materials used by Plantin’s shop and serves to make the history of printing tangible to students and scholars in the United States.

Dibdin, T. F., Middleton Collection of Books on the History and Practice of Bookbinding. (1817). The bibliographical decameron: or, Ten days pleasant discourse upon illuminated manuscripts, and subjects connected with early engraving, typography, and bibliography. London: Printed for the author, by W. Bulmer and Co., Shakespeare Press.

Voet, L. (1969). The golden compasses. A history and evaluation of the printing and publishing activities of the Officina Plantiniana at Antwerp. Amsterdam, New York,: Van Gendt; Abner Schram.

Bruce Leigh Myers is an associate professor and department chair in the Department of Graphic Media Science and Technology at RIT.