Vice President Mike Pence swore in Government Publishing Office (GPO) Director Hugh Nathanial Halpern on January 29, 2020 in a swearing-in ceremony at the Vice President’s Office. Halpern is the 28th person to lead GPO since the agency opened its doors for business on March 4, 1861, the same day Abraham Lincoln was inaugurated as the 16th President of the United States.

“I am grateful for the support of the President and Vice President for entrusting me to lead a nearly billion-dollar printing and publishing enterprise that serves all three branches of the Federal Government,” said GPO Director Hugh Halpern. “I look forward to continue meeting with the dedicated employees of GPO as we modernize and move the agency forward to meet the needs of our customers.” 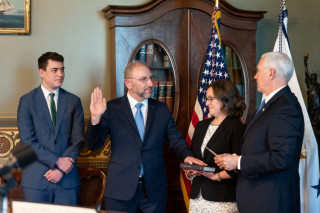 President Donald Trump nominated Halpern to be GPO Director on October 17. Halpern’s confirmation hearing was held November 14 before the Senate Committee on Rules and Administration. The Committee reported his nomination favorably to the full Senate on November 18. He was confirmed by the full Senate on December 4 and was officially sworn in on his first day at GPO on December 11.

GPO is the Federal Government’s official, digital, secure resource for producing, procuring, cataloging, indexing, authenticating, disseminating, and preserving the official information products of the U.S. Government. The GPO is responsible for the production and distribution of information products and services for all three branches of the Federal Government, including U.S. passports for the Department of State as well as the official publications of Congress, the White House, and other Federal agencies in digital and print formats.