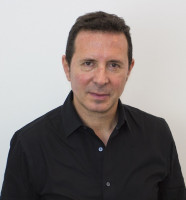 ELGIN, Ill. -  December 14, 2017 - Mike Kyritsi is in line to be the new president of swissQprint America, the U.S. subsidiary of the Swiss manufacturer of high-end UV inkjet printers. He is taking over in January 2018.

swissQprint large-format printers are developed and produced in Switzerland. The Swiss company established its first subsidiary in fall 2015 with Carmen Eicher in charge. She is now returning to the headquarters in Switzerland where she will continue supporting the U.S. team as a consultant. Mike Kyritsi, who has long-standing experience in the printing industry, is taking over as new president.

New Range of LED Printers
swissQprint has recently introduced a new range of UV flatbed printers featuring LED technology. Two models, the Impala LED (98×79.9˝ flatbed) and the Nyala LED (126×79.9” flatbed) are ready for demonstrations and sampling at swissQprint’s showroom in Elgin, Ill. So is the award-winning loading and unloading robot called Rob. From its Chicago business location, swissQprint covers all services: supplies of consumables and spare parts, technical and application support, production of samples and test prints. Several sales representatives are active throughout the country.

Take Advantage of the Economic Recovery

Five Things We Learned at ISA 2021