"While we have been successful in achieving controllable income during the quarter, we are still reporting net losses and contending with long-term financial challenges," says Postmaster General and CEO Megan Brennan. "We continue to focus on improving operating efficiencies, speeding the pace of innovation, and increasing revenues for the Postal Service."

Controllable income for the quarter was $576 million compared to $313 million for the same period last year. Calculation of controllable income takes into account the impact of operational expenses including compensation, benefits and work hours; but does not reflect factors such as the legally-mandated expense to prefund retiree health benefits (see Non-GAAP Financial Measures table below).

Net loss for the quarter was $2.0 billion compared to $1.5 billion for the same period last year. The change in net loss was most significantly impacted by a $547 million unfavorable change in the workers' compensation expense as a result of interest rate changes — a factor outside of management’s control.

"During the second quarter, we expanded work hours and our transportation network, taking more trips and increasing miles flown," relays CFO and EVP Joseph Corbett. "This largely resulted from strategic business decisions enacted to accommodate package growth and enhance service across the country."

Brennan also adds, "I am grateful to our dedicated employees who helped us to achieve controllable income this quarter, but we cannot let this result mask the financial challenges we face. Our financial situation is serious, but solvable. We are confident that we can return to financial stability through the enactment of prudent legislative reform and a favorable resolution of the upcoming regulatory review of our rate-setting system." 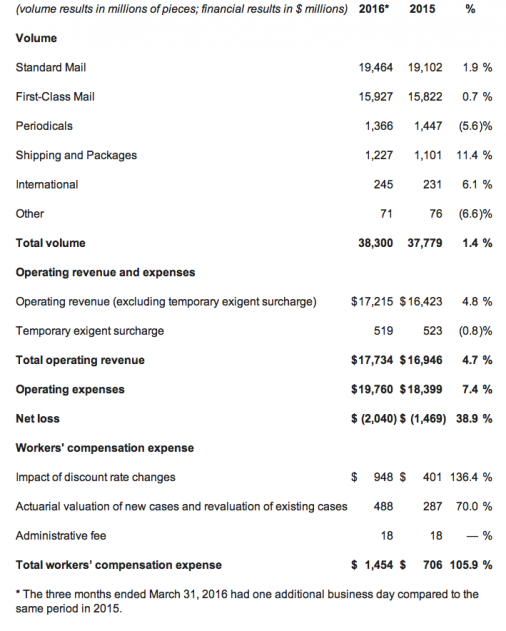 Non-GAAP Financial Measures
Included here is controllable income, which is not calculated and presented in accordance with accounting principles generally accepted in the United States (GAAP). Controllable income is a non-GAAP financial measure defined as net income subtracting operating expenses considered outside of management’s control. These expenses include the mandated prefunding of retirement health benefits, actuarial revaluation of retirement liabilities and non-cash workers’ compensation adjustments.

The following table reconciles GAAP net loss to controllable income and illustrates the income from ongoing business activities without the impact of non-controllable items for the three months ended March 31, 2016 and 2015: 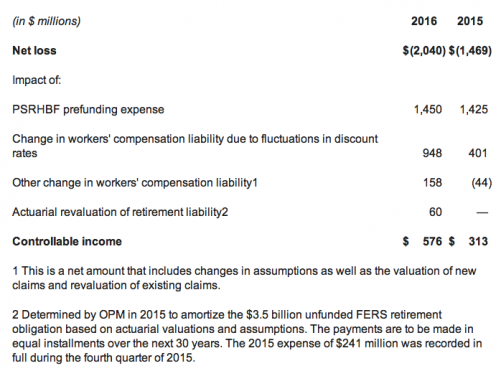