WASHINGTON - November 16, 2018 - The U.S. Postal Service reported operating revenue of $70.6 billion for fiscal year 2018 (October 1, 2017 - September 30, 2018), an increase of $1.0 billion compared to the prior year. The higher revenues were driven largely by continued growth in the Shipping and Packages business, where revenue increased $2.0 billion, or 10.1 percent, which more than offset revenue declines in First-Class and Marketing Mail as a result of declining volumes in that segment of its business.

”The secular mail volume trends continue largely due to electronic diversion and transaction alternatives. We compete for business in every product line, every day from the first mile to last mile,” said Postmaster General and CEO Megan J. Brennan. “We are aggressively managing our business and continuing to focus on serving our customers and communities. However, the flawed business model imposed by law continues to be the root cause of our financial instability. We are seeking reforms that would allow the organization to reduce costs, grow revenue, compete more effectively, and function with greater flexibility to adapt to the marketplace and to invest in our future."

Brennan added that addressing these urgently needed reforms would then provide an opportunity to consider broader public policy issues and develop long-term solutions to continue to enable the Postal Service to best meet the needs of the American public.

During the fourth quarter of 2018, the Governors of the Postal Service made a decision to reduce the organization's debt level to reduce interest rate costs and to better reflect actual borrowing needs. The Postal Service subsequently reduced its debt by $1.8 billion, finishing the year with $13.2 billion in debt outstanding. The organization plans to reduce its debt level by an additional $2.2 billion as existing debt matures in February and May 2019.

Operating expenses for the year were $74.4 billion, an increase of $2.2 billion, or 3.1 percent, compared to the prior year. This was driven by an increase in compensation and benefits of $896 million due to contractual wage increases and increased transportation expenses of $623 million primarily due to higher package volume, increases in fuel prices and higher highway contract rates.

Expenses for workers compensation and retiree health benefits increased by $801 million and $221 million, respectively, largely attributable to changes in actuarially determined expenses outside of management's control.  These increases were partially offset by a $260 million reduction in expenses for the amortization of unfunded retirement benefits.

Similar to the last several years, the Postal Service was unable to make the $6.9 billion in payments that were due to the federal government at the end of fiscal year 2018 to pre-fund pension and health benefits for postal retirees, without putting its ability to fulfill its primary mission at undue risk.

“We made the difficult decision to prioritize the maintenance of adequate liquidity to ensure the continued achievement of the Postal Service’s primary mission of providing universal postal services to the American people," said Chief Financial Officer and Executive Vice President Joseph Corbett. "Making the pre-funding payments in full or in part would have left the Postal Service with insufficient liquidity to ensure the continued achievement of our mission."

Corbett added that the inability to make these payments does not affect the continued receipt or accrual of these benefits by retirees and employees.

The following presents revenue and volume by service category for the year ended September 30, 2018, and 2017: 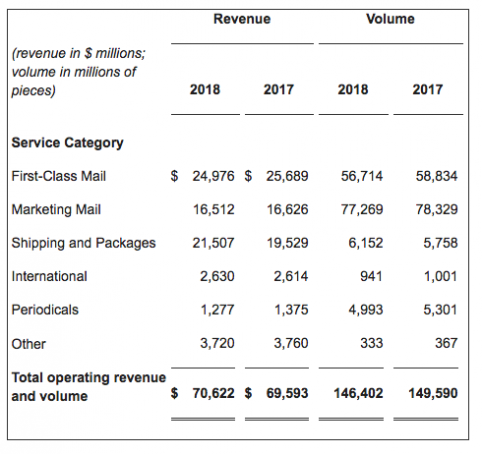 Selected FY 2018 and 2017 Results of Operations and Controllable Loss

This news release references controllable loss, which is not calculated and presented in accordance with accounting principles generally accepted in the United States (GAAP). Controllable loss is defined as net loss adjusted for items outside of management’s control and non-recurring items. These adjustments include workers’ compensation expenses caused by actuarial revaluation and discount rate changes, and the amortization of PSRHBF, CSRS and FERS unfunded liabilities. The following table presents selected results of operations and reconciles GAAP net loss to controllable loss and illustrates the loss from ongoing business activities without the impact of non-controllable items for the twelve months ended September 30, 2018, and 2017:

Complete financial results are available in the Form 10-K, available at http://about.usps.com/who-we-are/financials/welcome.htm.