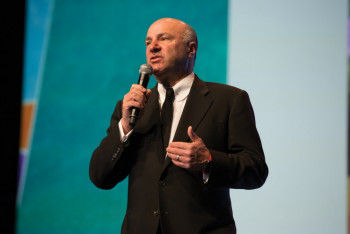 SAN ANTONIO — It was a carnival for HP equipment users when both Jetcomm and Dscoop dropped into town here April 13-16, though the style and delivery stood in stark contrast with one another. Jetcomm 2, the mecca for existing and prospective users of the HP PageWide inkjet web presses, was a bit more buttoned down and reserved as opposed to Dscoop11, the Indigomaniacal tour de force that touted bombast and ample star power.

Certainly, Jetcomm 2 was what one would expect from a user’s group gathering, relying on a straight-ahead conference blend that weaved in products, new technologies, printer panels and technical talk. An estimated 150 printers gathered in a Hilton Palacio del Rio conference room for a nearly 10-hour presentation during the course of two days.

Adi Chinai, president of King Printing in Lowell, Mass., believes there is a great benefit behind the Jetcomm user’s group, in seeing the community of HP inkjet users come together. Earlier this year, King Printing was recognized by HP as one of the top page-volume producers in 2015.

“It’s a fantastic forum for us to be able to share candidly amongst our peers so that we can try to help each other, even though it’s still a competitive market space,” he says. “It’s also interesting to hear how people are managing their presses. Each side is different, each user is different, each customer base is different. To hear the uniqueness across the spectrum, to hear how the people with the two series press, three series or four series press are using their technology completely differently and managing it completely differently … that brings a lot of value.”

The Trajectory of Production Inkjet
Following opening remarks by conference chair Patrick Headley (CEO, GI Solutions Group) and Eric Weisner (GM, PageWide Web Press, HP Inc.), industry consultant Marco Boer delivered the “next greatest thing” where he observed the trajectory of production inkjet printing during the course of the next 10 years. Among his observations were the top three trends to watch: a shift toward high ink coverage, the displacement of offset pages and a change in output quality expectations.

An entertaining exchange between Deborah Corn of the PrintMediaCentr and U.K.-based Matthew Parker — both PIworld.com bloggers and former print buyers — brought even more momentum to the proceedings. The duo provided three major takeaways from their print buyer survey, which canvassed 100 senior level advertising and marketing print buyers. The conclusions:

Some of the other findings: while 33% of print buyers care most about overall color quality, just 7% are concerned about color matching.

Happily Sharing Best Practices
Schilling returned the following morning to give a tutorial on best practices for testing inkjet coated papers. That was followed by a panel discussion on the challenges, innovations and opportunities in the new world of direct mail. GI Solutions’ Headley was joined by Scott Liebert of Freedom Graphic Systems and Chris Wells of DS Graphics.

Wells has no issue with sharing best practices. The most successful players, he muses, are more than happy to open their playbooks.

“I look at it as very similar to the early days of digital sheetfed printing, in that there are certain people who look at promoting the newest technologies as being secretive about it,” he says. “Other people have the philosophy that, if you can run a four-minute mile, who cares if someone can see you practicing? I’m more of that ilk.

“The more people that are out there talking about this to their customers, the more awareness, and the more agencies can find out about what can be done. That’s what’s going to really grow the business. Right now, it’s a somewhat limited market.”

That afternoon, the festivities moved into the cavernous Henry B. Gonzalez Convention Center for Dscoop11. The Indigo user’s group enjoyed an influx of 400+ attendees in comparison to 2015, all of whom had the opportunity to attend 81 educational sessions and visit more than 100 of HP’s partner vendors in the Solutions Showcase. HP also used the Solutions Showcase at Dscoop as the U.S. platform to showcase many of the Indigo and PageWide press technologies that debuted at drupa in Germany this month.

Dscoop also used live streaming — a first for the conference — with nearly 900 people virtually participating in this pilot program.

Dscoop Conference Chairman Michael Duggal, CEO of Duggal Visual Solutions, kicked off the opening session of the event by acknowledging the charity events that several printer attendees participated in, namely the Build-a-Bike activity (for the Boys & Girls Club of San Antonio) and a Texas Hold ’Em poker tournament. He cited U.S. Dept. of Labor and Statistics research that points out the U.S. printing industry employs nearly 450,000 people, which is more than industries such as coal, petroleum and tobacco.

The keynote speakers provided a mix of high energy, intelligence and business savvy. Networking stalwart Laura Schwartz, who served as the White House director of events during the Clinton administration, shared many stories about how random gatherings and the unlikeliest of personality pairings can be the launching pad for spectacular ideas. For example, she told the story about how a White House State Dinner that included Steven Spielberg, Jeffrey Katzenberg and David Geffen provided the genesis of what would become DreamWorks Pictures. 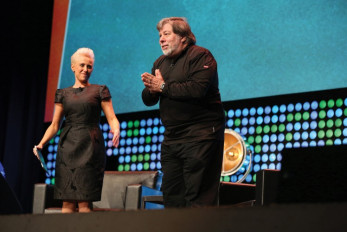 The Wonder of Woz
There was a lot of excitement over the appearance of Apple co-founder (and one-time HP employee) Steve Wozniak. Unfortunately, the high-charged Schwartz had trouble keeping “Woz” on track during a mostly stream-of-consciousness interview. Interestingly, Wozniak revealed his passion for low-brow humor, which provided insight into the complexities of a genius mind.

Perhaps the most rousing talk was delivered by Kevin O’Leary. The millionaire businessman, a.k.a. “Mr. Wonderful,” is one of the investor panelists on ABC’s Shark Tank reality TV show, where inventors pitch their ideas in the hopes of securing investment dollars to take their ideas to the next level.

O’Leary has earned a reputation as a cold, no-nonsense investor who gives viewers the impression that numbers, primarily those proceeded by a dollar sign, are all that matter to him. Other than a few less-than-complimentary remarks, such as a stranger calling him an a-hole while at a men’s room urinal and an MIT student calling him “the most evil man I ever met,” most interactions with O’Leary have been profitable.

He told a story about how a little-known cupcake producer went from $24,000 in revenues prior to appearing on Shark Tank to generating $365,000 a month afterward (now a staggering $12 million). He also recounted a success story that truly spoke to his audience: GrooveBook, a photo book that bends 38 degrees and can open like a magazine as opposed to a normal book.

Brian Whiteman, owner of Los Angeles-based Dot Graphics and the inventor of GrooveBook and its accompanying app, sought a $150,000 investment for a 20% stake in the app. O’Leary and fellow Shark Mark Cuban convinced Whiteman to take their offer of $150,000 for the ability to license it as a service to other online photo book companies. And less than a year later, Whiteman sold GrooveBook to Shutterfly for an eye-popping $14.5 million.

The 2017 Dscoop conference is slated for March 2-4 in Phoenix. PI