The University of Missouri Print & Mail Services is ranked by In-plant Impressions as the 10th largest University In-plant in the United States, with more than $7 million annual sales. More than 70% of this revenue comes from offset printing as they produce recruitment, promotional and other outreach materials for their 30,000 students in run lengths and sheet formats that aren’t practical for digital. In order to meet the University’s goal of improving the print quality of their materials, reducing manufacturing costs and eliminating equipment breakdowns, the University of Missouri recently installed a new RMGT 9 Series press to replace their Heidelberg Speedmaster 102 6-Color and MOZP 2-Color presses. 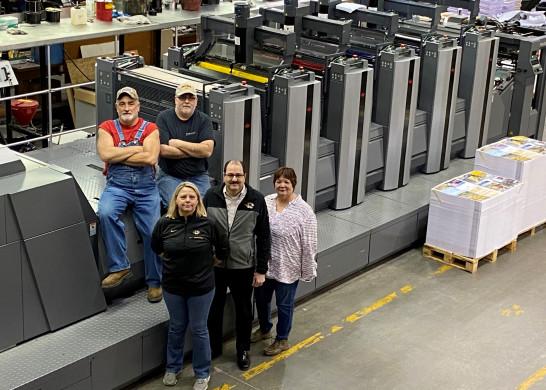 The new fully loaded 940ST-5+CC+LED-UV five-color with coater features RMGT’s Smart Insta. Color makeready technology and Fully Automatic Plate Changing along with GEW’s LeoLED-UV curing for both coated and non-coated work. This suite of automation technology is already impacting the print quality, job costs and reliability of the University’s Print & Mail Services even during the first few months of operation.

One of the biggest advantages the upgraded press provides is newfound flexibility. “At MU, digital and offset can now work side by side symbiotically,” explains Jeff McNeeley, Director, University of Missouri Print & Mail Services. “If I've got a surplus of work in my digital area, I will move some of that to the offset area, and vice versa. If I've got a ton of small jobs all scheduled to run digital, we'll gang them up and move them over to the new press. This option wasn’t possible on our previous Heidelberg. The flexibility saves not only time but expense. I'll move from digital to offset a lot easier and quicker now than ever. It's definitely cheaper to get started on this device than it was on our old device, hands down.”

In bringing LED-UV curing technology to their in-plant, MU Print & Mail Services has seen a great increase in efficiency, a welcome surprise to McNeeley. “Initially, LED-UV was the furthest thing from my mind. I didn't think it was even an option,” he states. However, after much research, MU chose to equip their RMGT 9 Series with GEW’s new LeoLED-UV curing system and they are seeing the benefits in action.

Jobs that would previously run at slower press speeds and needed to wait before proceeding are moving immediately into finishing thanks to the RMGT 9 Series 15,000 SPH speed and the ability to instantly cure inks and coatings on press. McNeeley cites one specific example of the LED-UV curing recently proving its true value. MU had a large job that needed to get done in a very short timeframe, consisting of several 30,000 16-page signatures printed in reflex blue. “As many in the industry know, reflex blue simply doesn’t dry, making the sheets difficult for the bindery to handle,” observes McNeeley. But after ordering LED-UV reflex blue for their RMGT press, they saw incredible results. “As soon as the sheets came out of the press, we started folding them. We were printing, folding and stitching all at the same time. That just would not have been possible with our legacy presses.”

Increased efficiency and consistent print quality are another key advantage that acquisition of the new RMGT 9 Series equipped with the Insta.Color has brought to Jeff’s department. “The closed-loop color management is a ‘night and day’ difference from our old workflow,” continues McNeeley. “Smart Insta.Color allows our prepress data to be directly loaded in the press so it can pre-ink the job, decreasing makeready times and reducing makeready waste.” He notes that makereadies that used to take up to an hour on the previous 40” press can now be completed in just 15 minutes on the RMGT 9 Series. “The quality here is just drop dead gorgeous,” mused McNeeley. “We’re getting nothing but compliments on our print quality. We're ecstatic about it.”

“The University of Missouri-Columbia is a great example of an in-plant printing operation that chose to rely on LED-UV cured offset as the most cost-effective way to manufacture print,” states Chris Manley, President, Graphco, Distributor for RMGT in the Midwest and Southeast. “Jeff did a thorough analysis of their print needs including an evaluation of inkjet and digital technologies along with the other major press manufacturers products. Their conclusion validates that and RMGT press equipped LED-UV curing offers the best solution to produce the high-quality printing the University of Missouri departments demand.”

“We realize that moving toward Graphco and RMGT after many decades of reliance on another vendor required a big leap of faith for Jeff and his Team,” continues Manley. “We will be here to earn that trust through thick and thin. The SEC is known for speed on the football field, so it’s also very exciting that the Missouri Tigers now joins the Alabama Crimson Tide as two SEC schools running very fast with their new RMGT 9 Series presses.”