WASHINGTON — May 11, 2017 — Although the U.S. Postal Service posted modest controllable income for the second quarter of fiscal year 2017 (January 1, 2017 - March 31, 2017) of $12 million, it fell well short of the $576 million that it had for the same quarter last year. This reduction was driven by the April 2016 expiration of the exigent surcharge, which would have generated approximately $500 million in additional revenue during the quarter had it remained in place, and to a lesser extent, a $69 million increase in controllable operating expenses.

Operating revenue was $17.3 billion, a decrease of $474 million from the same period last year. Revenue from First-Class Mail and Marketing Mail decreased $606 million and $331 million respectively over the prior year quarter, due largely to the exigent surcharge expiration and lower volumes. These declines in operating revenue were somewhat offset by continued growth in the Shipping and Packages business, with a second quarter revenue increase of $486 million, or 11.5%, over the same period in the prior year.

The net loss for the quarter declined to $562 million from a $2 billion net loss a year ago, as the Postal Service benefited from declines in operating expenses outside of management's control. Expenses for mandatory retiree benefit programs fell by a net $1.2 billion due to changes in funding requirements that took effect in 2017 according to law, while workers' compensation expenses fell by $1.1 billion due largely to fluctuations in interest rates. (See tables below for detailed financial results).

Even with continued achievements in improving operational efficiency and revenue, the Postal Service cannot overcome systemic financial imbalances caused by legal and other constraints. Passage of legislation that would allow the Postal Service to operate within a more sustainable business model is urgently needed. In March, the U.S. House Oversight and Government Reform Committee advanced H.R. 756, the Postal Service Reform Act of 2017 for consideration by the full House of Representatives.

“America deserves a financially stable Postal Service that can continue to play a vital role in our economy and society. The path forward depends on continued innovation and aggressive management actions, the passage of H.R. 756 into law, combined with a favorable outcome of the PRC’s 10-year pricing system review,” said Postmaster General and CEO Megan J. Brennan. “With these actions, the Postal Service will have the financial stability to invest in our future and continue to be an engine of growth, to be a strong business partner, and to meet the expectations of the American public.”

“We are addressing declines in letter mail volumes by aggressively managing our work hours and compensation expense, while balancing and fine-tuning the resources needed to accommodate growth in package volumes and to optimize customer service,” said Chief Financial Officer and Executive Vice President, Joseph Corbett. "Despite inflationary pressures in the marketplace, the Postal Service's controllable operating expenses rose by less than 1% in the quarter.”

Meanwhile, in addition to seeking needed legislative and regulatory changes, the Postal Service continues to focus on improving efficiency and on innovation to meet the evolving needs of its customers and to grow its business. By bridging the gap between the physical and digital worlds, the Postal Service is creating innovative experiences for consumers and maintaining the relevancy of physical mail in today's highly digital environment.

The following presents revenue and volume by category for the three months ended March 31, 2017, and 2016: 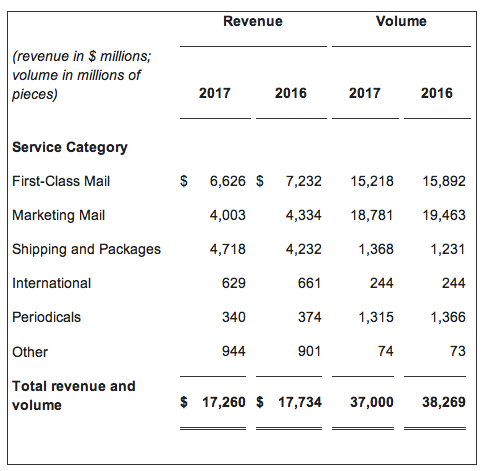 This news release references operating revenue before the temporary exigent surcharge, which is not calculated and presented in accordance with accounting principles generally accepted in the United States (GAAP).

The following table reconciles these non-GAAP operating revenue calculations with GAAP net loss for the three months ended March 31, 2017, and 2016: 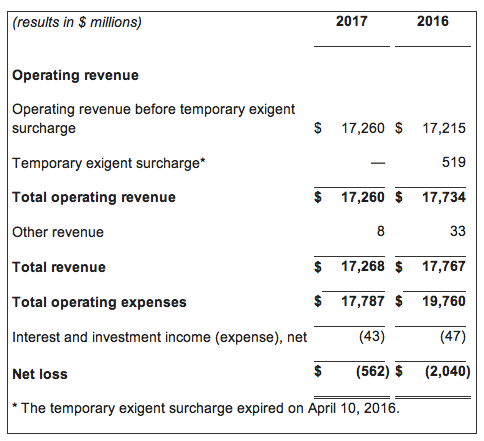 This news release references controllable income, which is not calculated and presented in accordance with GAAP. Controllable income is a non-GAAP financial measure defined as net income (loss) adjusted for items outside of management’s control. These adjustments include workers’ compensation expenses caused by actuarial revaluation and discount rate changes, PSRHBF prefunding expenses and the amortization of PSRHBF, CSRS and FERS unfunded liabilities.

The following table reconciles the Postal Service's GAAP net loss of $562 million for the quarter to controllable income and illustrates the income from ongoing business activities without the impact of non-controllable items for the three months ended March 31, 2017, and 2016:

Complete financial results are available in the Form 10-Q, available at http://about.usps.com/who-we-are/financials/financial-conditions-results-reports/fy2017-q2.pdf.