“We had an excellent year in 2015," said François Olivier, president and CEO of TC Transcontinental. "Our printing division and our Media Sector showed once again resilience by increasing their profitability in a market in transformation. In the printing division, we continued to optimize our platform, sign new agreements with customers and develop the promising in-store marketing market. In the Media Sector, we significantly increased our profitability by proactively managing our portfolio of publications, growing our digital sales and expanding our non-advertising sources of revenues.”

He continued, "In addition, I am especially satisfied with the major strides we made in our packaging division, a niche with a strong growth potential. Not only did we double our position in the market with the acquisition of Ultra Flex Packaging at the end of the year, we also signed a multi-year agreement with a leader in the North American dairy industry. Lastly, thanks to our core assets’ ability to generate significant cash flows and our sound financial position, we are well positioned to continue our transformation.”

2015 Fourth Quarter Results
Revenues for the fourth quarter of 2015 went from $548.2 million to $540.1 million. The decrease stems from the continued effects of the market transformation on the results of the printing division and the Media Sector. The loss of certain customers early in the fiscal year in the flyer printing operations was mitigated by previously announced new contracts, the progression of the in-store marketing product offering and an increase in revenues in the digital business. The existing flyer business remained relatively stable. The appreciation of the US dollar against the Canadian dollar and the acquisition of Ultra Flex Packaging, announced in Oct. 2015, also had a favorable impact.

Adjusted operating earnings decreased 5.0 percent, from $92.4 million to $87.8 million in the fourth quarter of 2015. Excluding the exchange rate effect, the net effect of acquisitions, disposals and closures and the unfavorable impact of the stock-based compensation expense, adjusted operating earnings would have decreased by only $1.7 million, mainly as a result of cost structure reduction and optimization initiatives, which partially offset the decrease in revenues.

Fiscal 2015 Results
In 2015, TC Transcontinental’s revenues grew 0.6 percent, from $1,990.4 million to $2,002.2 million. Acquisitions, more specifically Capri Packaging and the Quebec weekly newspapers, mainly contributed to revenues. The signing of new agreements in several niches and the appreciation of the U.S. dollar against the Canadian dollar also had a favorable impact. The increase in revenues was however mitigated by the impact of the market transformation on the results of the printing division and the Media Sector, the loss of certain customers early in the fiscal year, which affected the flyer printing and distribution operations, and the sale of certain assets.

Adjusted operating earnings increased by 9.3 percent, from $253.2 million in 2014 to $276.7 million in 2015. This increase is mainly attributable to the contribution from acquisitions, disposals and closures and the favorable exchange rate effect. Excluding the exchange rate effect, the net effect of acquisitions, disposals and closures and the unfavorable impact of the stock-based compensation expense, adjusted operating earnings would have increased by $5.1 million as a result of the solid performance achieved by our operations.

Change in Senior Management
Ted Markle, president of TC Media, will leave the Corporation on Dec., 31, 2015. Markle has made this decision after a personal reflection where he plans to embark on a new stage in his career and take on new professional challenges. We have developed seasoned leaders who have the experience and competencies to take on additional responsibilities as a result of this departure.  The Corporation wishes to thank Markle for his many contributions over the years.

Outlook 2016
During fiscal 2015, with the exception of the loss of certain customers, our flyer printing volume remained stable, and we expect this trend to continue in fiscal 2016. In addition, we will continue to develop our point-of-purchase marketing product offering for retailers, and the non-recurring printing contract for the Canadian census will also have a positive impact. However, we are expecting a decrease in newspaper printing volume as a result of the digital shift made by certain publishers; on the other hand, we will be pursuing our efforts to integrate new publishers. Lastly, we will continue with our optimization initiatives to offset the effect of the transformation of the printing industry.

We will continue executing our diversification strategy into flexible packaging. Within our existing operations, we will complete the integration of Ultra Flex Packaging to realize certain synergies and to benefit from a national sales force that will help us grow our revenues. Lastly, we will maintain our disciplined acquisition approach in this promising market in order to invest in quality assets that meet our strategic criteria.

Within the Media Sector, we will continue growing our strategic and profitable digital products, while adapting our cost structure in order to mitigate the effect of the difficult advertising market conditions that will persist.

Our significant cash flows and our excellent financial health should permit us to continue our transformation, as part of which we expect to continue incurring approximately $75 million in capital expenditures during fiscal 2016. Finally, we will continue to build the foundations of our Packaging Division while maximizing our printing operations and strengthening our Media Sector.

Reconciliation of Non-IFRS Financial Measures
Financial data have been prepared in conformity with IFRS. However, certain measures used in this press release do not have any standardized meaning under IFRS and could be calculated differently by other companies. We believe that many readers analyze our results based on certain non-IFRS financial measures because such measures are more appropriate for evaluating the Corporation's operating performance. Internally, management uses such non-IFRS financial information as an indicator of business performance, and evaluates management's effectiveness with specific reference to these indicators. These measures should be considered in addition to, not as a substitute for or superior to, measures of financial performance prepared in accordance with IFRS. 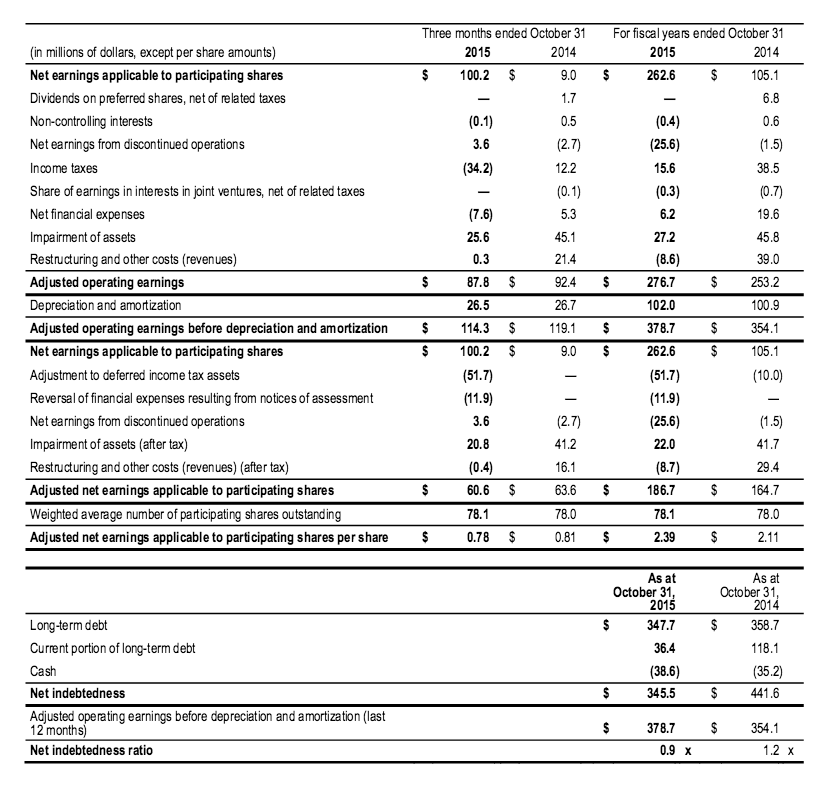 Dividend on Participating Shares
The Corporation’s Board of Directors declared a quarterly dividend of $0.17 per share on Class A Subordinate Voting Shares and Class B Shares. This dividend is payable on January 20, 2016 to shareholders of record at the close of business on January 4, 2016.

About TC Transcontinental
Canada’s largest printer, with operations in print and digital media, flexible packaging and publishing, TC Transcontinental’s mission is to create products and services that allow businesses to attract, reach and retain their target customers. Respect, teamwork, performance and innovation are strong values held by the Corporation and its commitment to all stakeholders is to pursue its business and philanthropic activities in a responsible manner. Transcontinental Inc. (TSX: TCL.A TCL.B), known as TC Transcontinental, has over 8,000 employees in Canada and the United States, and revenues of C$2.0 billion in 2015.