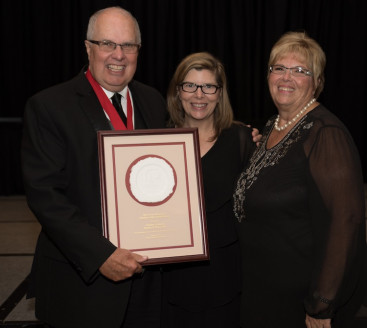 WARRENDALE, Pa. - December 5, 2017 - Tim Burton of Burton & Mayer has been named the 2017 Lewis Memorial Lifetime Achievement Award recipient by Printing Industries of America. Established in 1950, the Lewis Award pays homage to business leaders who have made major, long-term contributions to the graphic arts industry and have been a significant force in shaping the business of printed communications. The award was presented on Nov. 10, 2017 at the Ben Franklin Honor Society Award Dinner during the Fall Administrative Meeting of Printing Industries of America in Concord, N.C.

Joe Lyman, president of Great Lakes Graphics Association, nominated Burton for his overwhelming contributions to the printing industry both in the Great Lakes region and nationally.

“Tim exemplifies the selfless service that embodies a winner of the Lewis Memorial Lifetime Achievement Award," said Lyman. "His service to the industry has spanned several decades, providing leadership, helping to improve industry conditions, and sharing knowledge to grow on both the local as well as national level.”

Burton began his career at Burton & Mayer working in the prepress and bindery departments part-time during high school, representing the fourth generation of the family to work there. His original goal in life was to be a Catholic priest, but, after a year in the seminary, he decided business was his true vocation. While working in customer service at Burton & Mayer, he continued his education at Marquette University. During the 1970s, Burton worked in sales. In 1980, he purchased his father’s share of the business, which at the time generated $3 million annually in sales and had 25 employees. In 1991, he was named president and chairman of the board.

Today, Burton & Mayer is a $15-million sheetfed and digital printer running three shifts with 85 employees and located in a 104,000-square-foot plant in Menomonee Falls, Wis. Burton attributes the success of Burton & Mayer through the years to plenty of support and services from both his local affiliate, Printing Industries of Wisconsin (now Great Lakes Graphics Association), and Printing Industries of America.

Burton is someone who has always given back to his industry and his community. Within Printing Industries of America, he served on virtually every committee, including Association Relations (which he chaired from 2007 to 2010), Finance, Investment, Premier Print Awards, and many more. In addition to the national Premier Print Awards contest, Burton has also judged affiliate contests for PICA, PAF, PIAS, PGAMA, PIAG, PINE, and GLGA.

“Beyond just a great businessman, Tim is a thoughtful, principled, and kind individual. I treasure our friendship and that of his great family,” said Michael Makin, president and CEO of Printing Industries of America.

Please join Printing Industries of America in congratulating Tim Burton on this tremendous and well-deserved achievement. More about the Lewis Memorial Award can be found at www.printing.org/lewis.

Innovation and Your Business Model