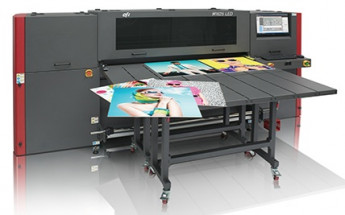 FREMONT, Calif. — March 24, 2016 — Several franchises in the SpeedPro Imaging studio network are fueling their success by installing the EFI H1625 LED printer. The installations stem from an extensive testing and validation process conducted at SpeedPro Imaging’s Centennial, Colo., headquarters, followed by a 2015 partnership agreement between EFI and SpeedPro to help franchises grow with the 65" printer's versatile, energy-efficient LED imaging capabilities.

The hybrid roll/flatbed, mid-level production inkjet printer is designed to maximize image quality at an affordable price, with four-color grayscale imaging at resolutions up to 1,200x600 dpi and EFI’s superior-quality white ink as a standard feature. Users benefit from extended media versatility on a wide range of flexible and rigid substrates up 2" thick with energy-saving, "cool cure" LED technology that gives users the ability to print on substrates that cannot withstand the heat of other drying or curing methods. The printer also offers high uptime with simple, automated operational and maintenance features.

SpeedPro Imaging’s franchise network of more than 120 studios currently operates in 31 states, with a Canadian affiliate that has locations in eight provinces. The SpeedPro-certified EFI LED printer has been available to the network since mid-2015, with six units installed to date and two more coming on line this quarter.

“We saw an opportunity in the marketplace because this hybrid printer is really attainable to our franchise partners at a good price point, and it opens a lot of doors with the types of applications we can deliver,” according to Boris Katsnelson, CEO of SpeedPro Imaging. “We like the white ink on board, which is a strong feature, and the printer itself also is a really efficient machine. EFI has been a great partner for us as well.”

Significant Savings in Both Time and Money

Three of the franchisees who have installed the printer exemplify the advantages SpeedPro Imaging studios are gaining as they upgrade their wide-format printing operations.

Jeremy Petty’s Fort Worth, Texas, SpeedPro Imaging studio was the first franchise location in the SpeedPro network to install the printer. Petty knew EFI’s reputation for quality and welcomed the fact that the printer was now approved and certified for use within the SpeedPro network. "We were looking for an option that gave us the ability to do high-quality work on the flatbed," recalls Petty, "and we wanted to work with EFI."

Petty’s location does a lot of acrylic work and, previously, the franchise had to print those jobs out on a roll-to-roll printer and mount them to acrylic by hand. The Fort Worth franchise now sees tremendous savings in the time it takes to produce those jobs. One repeat acrylic signage job used to take three days to produce and, with the new printer, Petty’s team can complete it in four hours.

Petty also found that the printer can help his studio win higher-end jobs from its current customer base. "Within the first month we had it," he says, "we were able to get a project for 63 3x4-foot acrylic pieces. It was high-dollar, high-margin work and we just couldn’t do it before."

Petty adds, "The printer gives us the ability to better address our current market. It saves us time and money versus the process we were running through before, and the increased margins are pretty healthy."

For Doug Cole, president and owner of the Rochester, N.Y., SpeedPro Imaging franchise, the main selling point was the white ink. When he saw the EFI H1625 in action, he was impressed with the quality of the work coming off the machine, and could see how it could benefit his studio.

The backlit displays his location produces, in particular, saw a huge boost in quality. "The EFI printer’s ability to print white ink, and then layer color on top of that, is a startling improvement," relays Cole. "I thought I was doing a good job before, but this is a night-and-day difference."

Backlit displays are not the only projects taking off at SpeedPro Imaging Rochester. Just recently, Cole secured another type of job he would not have been able to produce before installing the printer last autumn.

"We used the printer on a job for the Tour de Cure, benefiting the American Diabetes Association,” he says, "and it not only needed to look great, it also needed to be produced quickly."

He continues, "We are now about to produce sizable jobs like this within 24 hours for a client. We would not have been able to get the Tour de Cure sale without this printer; it was probably 40 sheets of printing we had to get done, and we had zero time. We had to run a little late into the evening to get it done in time, but when we’re able to do things like that for a client, it really solidifies that relationship.”

Stephen Stanfill, proprietor of SpeedPro Imaging of St. Charles in Wentzville, Mo., first saw the EFI wide-format printer in action at the SpeedPro owners convention last year, and he was immediately impressed. His location wasn’t running a flatbed device, so he bought the EFI printer anticipating that it would open up new opportunities and make his studio more efficient.

Today, the printer allows Stanfill to be more competitive with his pricing, while still improving overall profitability. Volumes are increasing as well, as the Wentzville studio is now landing jobs that it could not win in the past.

"We’re able to do a lot more jobs with a lot more substrates," Stanfill says. "For example, right now it’s political season, and we’re able to cut the cost of goods and the time by printing direct-to-substrate."

Stanfill also noted how much he enjoys working with EFI. "EFI’s customer service is over the top in terms of responsiveness. Any time there is a new piece of equipment, there is a learning curve. And EFI and their partners in the field have gone above and beyond. When we call with issues or things we couldn’t figure out, they’ve been phenomenal. They troubleshoot over the phone, and if we can’t figure it out, there’s never a question — they say, 'we’ll get someone there.' And it’s usually within 24 hours."

Commenting on the installations, Frank Mallozzi, senior VP, worldwide sales and marketing, EFI, said, "We are proud to be a partner with the SpeedPro Imaging network. SpeedPro is a unique brand that focuses on giving entrepreneurs a competitive advantage, and EFI wide-format printers are helping progressive-minded SpeedPro owners meet or exceed their goals."

About SpeedPro Imaging
SpeedPro Imaging is a premier wide-format imaging franchise brand, specializing in extreme-resolution printed graphics. As a leading company in high-quality, large-format imagery including tradeshow displays/exhibits, retail signage, building wraps and vehicle wraps, Speedpro takes visual communications to the next level. SpeedPro has a network of over 120 nationwide, executive-managed studios focused on revolutionizing the graphics/communications industry.

About EFI
EFI is a global technology company, based in Silicon Valley, and is leading the worldwide transformation from analog to digital imaging. The company is passionate about fueling customer success with products that increase competitiveness and boost productivity. To do that, it develops breakthrough technologies for the manufacturing of signage, packaging, textiles, ceramic tiles, and personalized documents, with a wide range of printers, inks, and digital front ends, and a comprehensive business and production workflow suite that transforms and streamlines the entire production process.