The Power of the Prototype

One way smart companies reduce the risk of error is by creating and testing prototype packages. Prototyping facilitates conversation and decision making, drives efficiency into the process, and helps avoid potential speed bumps that could end up costing time and money.

However, printing, assembling, and shipping a one-off prototype is a labor-intensive, manual process and coordinating the test itself is expensive for one product.

The answer is not to abandon the physical prototype, but to find a viable digital alternative.

The Virtual Alternative
Cyber Graphics has been an ally to consumer brand companies across North America, providing a full range of services - package design, prototyping, prepress, and flexographic plate-making. The prototyping aspect of the business is growing, according to Creative Director John Davis. Making physical prototypes for clients was limited by cost and time constraints, so they recently began exploring “virtual reality” alternatives, ultimately choosing CGS Publishing Technologies’ (Booth 631) iC3D. 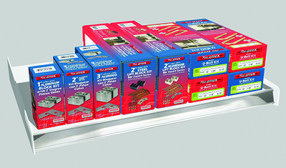 Business Opportunities
Cyber Graphics, and its parent company Bryce Corporation, have been actively using iC3D’s virtual prototypes to help CPC’s and their retailers make smart decisions. This includes a wide variety of individual 3D package designs and store shelf simulations. In many cases, these virtual prototypes are used in focus group studies, at a fraction of the cost.

Case in point: Memphis-based Superior Automotive is a supplier of products and accessories for traditional automotive retailers like AutoZone, O’Reilly Automotive, and Pep Boys.

“Cyber Graphics introduced iC3D to us within the past year,” says Randolph Sanchez, Executive VP and Division Manager, describing the redesign process.

“The old packaging was too large. Retail space is competitive and limited. We needed packages that were smaller and compelling. Cyber Graphics created 3D representations of the new designs. Without having to create anything physical, we were able to quickly build a shelf set to show our retailers.” Sanchez estimates that using iC3D prototypes in sales presentations to its traditional automotive retailers has resulted in over $1 million in new business in less than a year - all without printing a single prototype.

Store Shelf Simulation
Cyber Graphics and Superior are increasingly using iC3D’s ability to combine multiple 3D models on a single, virtual shelf or display. Using the program’s perspective control, 2D photographs of actual display shelving and products (including those of competitors) can be combined with 3D models to create a realistic simulation of the store or other point of purchase.

“We’re very pleased with the quality and the use of 3D technology has really paid off for us. We send package files to be printed by our manufacturer with confidence that they’ll come out right,” Sanchez says.