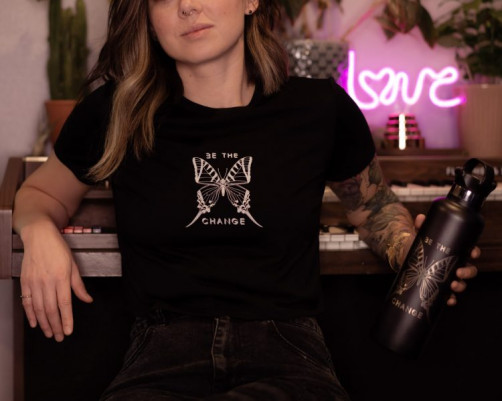 Dallas-based tattoo artist Dre teamed up with The Dallas Print Factory to produce T-shirts to raise money and awareness for the Black Lives Matter movement.

COVID-19 has impacted people from all walks of life, but it has also played a major role in bringing together communities across the country. And with social justice front and center, a Dallas-based tattoo artist, Dre, was determined to raise money for tackling social injustices and supporting the Black Lives Matter movement. As recent events increased awareness of racial disparities, it was important for Dre to raise money for charities across the country that support Black Lives Matter. That’s when she teamed up with the Dallas Print Factory (DPF) to help.

“I reached out to Dallas Print Factory and asked if they would be willing to team up to donate products so that I could sell them and donate proceeds to charities like the Loveland foundation, which provides therapy for Black women and girls, Black Table Arts, which creates spaces for organizing and educating black artists, and House of Rebirth, which provides resources to underserved Black trans women through transformative housing,” said Dre.

The Dallas Print Factory (DPF) accepted the offer and immediately got to work. Together, they created customized shirts and water bottles with inspiring words like “Be the change.”

“It was a big hit. Everyone was so nice, and everything was done quickly and flawlessly,” said Dre. “DPF’s quality is top-notch. Everyone loves their shirts, and I still see people using their water bottles on Instagram.” 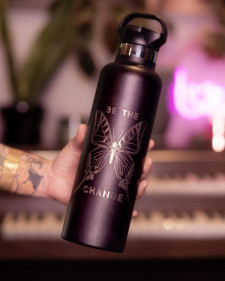 Dre and The Dallas Print Factory also created water bottles with inspiring words like “Be the change.”

This local artist’s determination to give back doesn’t stop at raising money. She also wants to raise awareness. Dre is doing her part to make sure everyone in the Dallas area practices their right to vote, even if it means adding a little incentive.

“I want to make sure people know they have the right to vote and that they should use it,” said Dre. “I believe this will be the biggest presidential election of our lives. It matters, it affects you and others you know. I’m offering a raffle to give away two free tattoos to those who vote.”

Dre is giving five keychains and stickers to runners up. Individuals can have multiple entries by showing their “I voted” stickers and reposting the giveaway announcement with the hashtag #IvotewithDre to help spread the message.

While the recent endeavors have been inspired by current events, it’s not the first time Dre has used her talents to help others.

“Since the beginning, my work has not been about me. It’s always been for other people,” explained Dre. “I tattoo for people — whatever they want, whatever best fits their lives in that moment. I have a talent that’s for other people to enjoy.”

Her passion for making simple human connections is even shown from how her professional relationship with Dallas Pint Factory began.

“I’ve known Dallas Print Factory for a while now. They’re right down the street from the studio,” said Dre. “One day I popped in and met Ray. He was super easy to work with and helped me out. It was an instant relationship.”

As for advice to others also interested in helping others, Dre has something to say.

“Buy local. Support your community. Use your platform for good,” said Dre. “Be the person your dog thinks you are.”

And that’s something we can get behind.