Target Report: Williams Lea Tag is on the Move 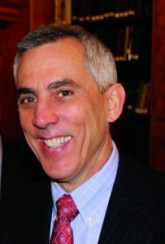 Printing and marketing services companies should be prepared for a renewed onslaught on their large corporate accounts. One the world’s top print management companies, Williams Lea Tag, was just acquired by Advent International, the sixth largest private equity fund in the world (with $39 billion under management). Headquartered in London, Williams Lea Tag has been owned since 2006 by the massive logistics and postal services company, Deutsche Post DHL Group, known worldwide for its yellow DHL trucks and overnight envelopes. Once the carve-out is complete, Advent is planning for “further growth on a global scale” for its newly independent company, and it has the investment capital to fund that strategy.

From its founding in 1820 in London as a financial printing business, Williams Lea Tag has grown into a global business process outsourcing company, delivering integrated marketing and communications services. Originally focused on providing print management services, the company moved upstream in a big way in 2011 with the purchase of the design and production agency Tag Worldwide. With over 10,000 employees in more than 40 countries, Williams Lea Tag offers services in four areas: creative production, sourcing, customer communications and publishing, and document workflow. Competitors should expect that with its new owners focused on growth, Williams Lea Tag will be pushing hard to unseat the incumbent providers of these services to large “A-list” customers currently served by independent printers and marketing service providers.

Williams Lea, as it was known in the year 2000, invented the current print management model, landing a ground-breaking contract for AXA insurance, in which the company assumed all responsibility for the management of all AXA’s print production activities in the UK. According to their press release at the time, “this radical solution involved a substantial number of staff transfers” (from AXA’s payroll to Williams Lea’s). By 2009 the company was using this strategy very effectively and signing significant new deals in the US.

The other major player in the print management business, InnerWorkings, got off the ground shortly thereafter in 2001, and now reports in excess of $1 billion in annual revenues. Pitney Bowes also jumped into the game, and RR Donnelley offered print management services that competed directly in the “total outsourcing” space.

The Williams Lea strategy was more than just external cost reduction achieved through aggressive buying practices. As Williams Lea discovered, hiring a client’s print purchasing personnel enabled them to promise and deliver fully burdened cost reductions that most printers simply can’t match. Only large sophisticated companies, such as Williams Lea Tag and Innerworkings, have the financial strength and organization to absorb multiple personnel that may be geographically distributed and accustomed to working within a large corporate structure. The print management proposition is sold to prospective customers at the CEO or CFO level, outlining the total cost of managing the procurement, storage and distribution of their printed materials. By the time the typical commercial printer learns that their treasured account is at risk, the game is effectively over.

The print management companies have continued to evolve. WorkflowOne was acquired by Standard Register (see The Target Report – August 2013), which in turn was acquired by Taylor Corporation when Standard Register filed bankruptcy (see The Target Report – June 2015). Williams Lea acquired Tag Worldwide in 2011, providing creative, prepress and production services, working with and also competing with advertising agencies. In 2013, Innerworkings acquired EyeLevel which designs and produces retail displays. (seeThe Target Report – July 2013) The month before, Innerworkings acquired Professional Packaging Systems in the UK, a print broker and designer of high-end packaging. In a carve-out similar to this latest deal, another huge fund, Apollo Global Management, acquired Pitney Bowes Management Services, since renamed Novitex and most recently merged into Exela Technologies.

Although the print management firms initially took advantage of and were enabled by the chronic overcapacity in the printing industry, the major players continue to head upstream into design, content creation and document management where the margins are greater. Independent printers should beware and prepare – if they have not yet done so, a print management company will be knocking on the door of one of their best accounts promising reductions in their print spend.

Commercial Printing and Diversified Services
Mittera Group, based in Des Moines, Iowa, is now on the national stage of contenders entering the roll-up space in the commercial printing segment. That role was left wide open when Consolidated Graphics closed up its M&A shop and rolled itself into the RR Donnelley company – that was before RRD split itself up last year. Mittera announced that it has acquired Earthcolor, a significant player in the high-end commercial printing market on the east coast. Headquartered in Parsippany, New Jersey, Earthcolor also has manufacturing facilities in Texas, Florida and on Long Island, New York. With plants in Iowa and Wisconsin, Mittera now has coverage across the Midwest, Eastern US and Southeastern regions.

The Stevens Group in Elmhurst, Illinois announced the acquisition of CL Graphics* in nearby Crystal Lake. CL Graphics serves a number of niche markets, including nonprofits, libraries, and associations, as well as small and medium-sized businesses in a range of industries. Production will be consolidated in the Elmhurst facility.

Corporate Press has acquired the McArdle Solutions division of Bloomberg BNA in Upper Marlboro, Maryland. In a “reverse tuck-in” transaction, Corporate press will be moving their operation, as well as consolidating their ColorCraft subsidiary, into the acquired company’s facility. The company also announced a rebranding as Corporate Communications Group.

Packaging
WestRock, the combination of RockTenn and Westvaco (see The Target Report – January 2015) continues to build out a global integrated paperboard and packaging production platform, announcing the acquisition of Hannapak in Australia. The acquired company produces folding cartons for the beverage, food, confectionary and healthcare markets. WestRock paid $60 million in cash for the company, seven times EBITDA before accounting for any expected synergies which are expected to bring the effective multiple to less than five times EBITDA.

ProAmpac, a portfolio company of the Pritzger Group and regular entry on our deals logs, has acquired the Clondalkin Flexible Packaging Orlando division of global packaging producer Clondalkin based in The Netherlands. The acquired facility produces lids and films, primarily for the food industry. Included in the products produced are spiral labels that are used on refrigerated dough products and frozen orange juice, among others.

In corrugated box production, Sacramento Container Corporation was acquired by Packaging Corporation of America, based in Lake Forest, Illinois. Packaging Corporation now reports in excess of $6 billion in revenues, and paid $265 million in cash for the acquired assets which includes two facilities in California. The pre-purchase price multiple was not disclosed, however the post-purchase multiple, taking into account tax benefits and synergies, was reported at five times EBITDA.

Oliver Printing & Packaging, a portfolio company of Pfingsten Partners, has acquired Pohlig Packaging, the first bolt-on for the Oliver platform since being acquired in 2016 by the private equity fund. The acquisition of Pohlig in Richmond, Virginia, establishes Oliver which is located outside of Cleveland in Twinsburg, Ohio, as a multi-plant folding carton manufacturer. 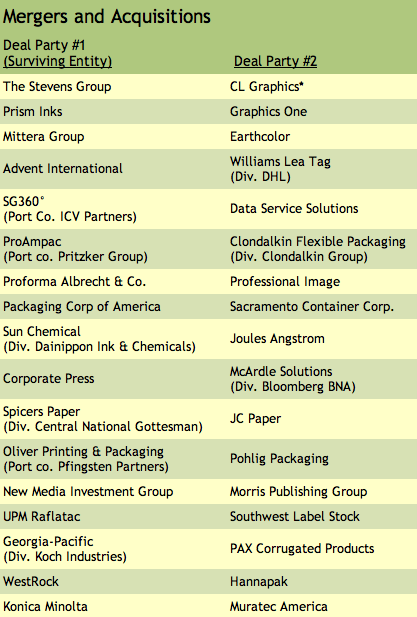 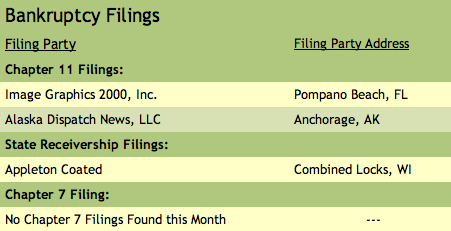 * Graphic Arts Advisors, publisher of The Target Report, served as exclusive advisors to CL Graphics in this transaction.

Click here for The Target Report August 2017 for the complete deal logs with additional information and links to sources.