The trend toward specialization in the broadly-defined graphic communication industries is clearly evidenced by recent M&A transactions. Fewer companies are trading hands that would be considered general commercial printing companies, with a commensurate increase in deals that involve a specialized print-centric activity or product. As we noted in the latest Target Report Annual Review, the number of announced transactions in the commercial printing segment is at a four-year low. The reduction in the number of tuck-in transactions, in which one company closes up and folds its sales into another, is dramatic, now less than one-third of the total deals in the commercial printing segment (for more, see The Target Report Annual Review - 2022 M&A Activity).

Nonetheless, even with a quieter commercial printing segment, overall deal activity in the printing, packaging and related industries remains robust. A peek into several recent transactions, all announced in November, each in different graphic segments, helps to illustrate how specialization is driving buyers to complete M&A transactions.

SupremeX, the Canadian publicly-traded envelope and folding carton manufacturing company, acquired Royal Envelope Corporation, based in the Chicagoland area. According to the Supremex press release, the acquired company “focuses on higher-end, specialized, highly decorated envelopes, with expertise in special format, colored envelopes.” In other words, a niche within the niche of envelope manufacturing.

SupremeX has a long history in the envelope business. Initially a roll-up focused on envelope production, SupremeX was acquired in 1995 by Mail-Well, the voracious US-based consolidator. With its roots also in envelope production, Mail-Well went on a printing industry acquisition binge, seemingly strategically unfocused, other than to see how many deals the company could complete in how short a time. The unsurprising result was too much debt, retrenchment, and in an effort to reinvent itself, Mail-Well was rebranded as Cenveo. As the company began its long unwinding process, the Supremex division was an early beneficiary and was spun out in 2006.

Eventually Cenveo went through a restructuring via a bankruptcy filing. Earlier this year, Cenveo management completed a buyout, imploding the company back to its core as an envelope manufacturing company (for more, see Cenveo Returns to its Roots – July 2022). It was a well-timed resurrection for Cenveo, as demand for envelopes has exceeded supply over the past couple of years.

In the meantime, as its former parent went through its ups and downs, the now independent SupremeX focused on the envelope business and completed a series of accretive acquisitions.* This most recent acquisition, Royal Envelope, generated revenues of $38.2 million in the year ended June 30th. Royal was purchased for total cash consideration of $18.7 million on a cash-free, debt-free basis, plus a $2 million kicker for recently acquired equipment. With this latest acquisition, Supremex further differentiates itself with increased capacity in the production of specialized highly decorated envelopes.

Sealed Air Corporation, best known for its invention and marketing of the ubiquitous bubble wrap packing material, announced the acquisition of Liquibox. Both companies, buyer and seller, trace their roots back to the early 1960’s, a time of explosive growth in the use of plastics to improve everyday products.

Two civil engineers were working out their idea for dimensional wallpaper. They laminated two layers of plastic together, with air trapped in between, creating little bumps. As it turned out, the world did not need bumpy plastic-covered walls. However, the inventors realized that they had probably created something useful. Next, they marketed their invention as greenhouse insulation. Turns out that this was a good idea, but only of interest to a very limited addressable market. Determined to make something of this lightweight cushy stuff, they hit on the idea that their invention made excellent packing material and Bubble Wrap was born. Fortunately, for all of us who receive well-packed items (and also those who enjoy popping those little bubbles), the entrepreneurial spirit prevailed. The Sealed Air company was founded and eventually grew to become a global supplier of specialty packaging products.

Liquibox, the acquired company, is a manufacturer of highly specialized boxes with a plastic bladder liner on the inside, usually affixed with some type of plastic valve designed for easy dispensing of the contents. On the outside, a printed corrugated carton provides for strength and printed branding. Generically known as bag-in-box packaging, the design combines light weight with functionality and is now used to package everything from water to wine. The original bag-in-box design was invented in 1955 by an American chemist seeking a safe and effective method to ship and dispense battery acid. It did not take too long for the value of the basic design to be recognized and subsequently adopted to store, ship and dispense milk, wine, water, and other beverages.

Founded in 1961, Liquibox is based in Richmond, Virginia, and employs 1,300 people in 18 locations across the globe. Revenues for 2022 are estimated to be $362 million, with EBITDA of $85 million. Sealed Air paid $1.15 billion for the company, 13.5 times EBITDA, proving that specialization, superior strategic fit, uniqueness of the opportunity, and stellar EBITDA performance (23.5%), combined with a meaningful revenue stream that moves the needle for the buyer, results in multiple expansion for the seller.

Sonoco acquired WestRock’s 65% interest in RTS packaging. Formerly a joint venture between Sonoco and WestRock, RTS Packaging will now be wholly owned by Sonoco. The acquired company’s primary product is preassembled collapsed partitions used to keep glass bottles and other products separated within a corrugated outside carton. Other products produced include 6-pack carriers, with partitions intact, shipped collapsed and flat to bottlers, as well as slip sheets manufactured to spec for stacking products. It’s all about partitions.

The buyer, Sonoco, is probably best known for its paper tubes, paper cans, and paper cores, including the Sonotube concrete forms used in construction. Established in 1899 as the Southern Novelty Company, the company began by producing the first paper-based cone-shaped carriers for yarn. The invention took off, replacing the wooden textile cones of the day. By 1923, paper cones were no longer a novelty, so the company changed its name to the much simpler Sonoco. Now a highly diversified producer of packaging, both paper-based and plastic, the company has over 22,000 employees, with 300 operations in 32 countries.

Revenues of RTS Packaging, the acquired company, are expected to reach $270 million in 2022, with EBITDA of $50 million. With a purchase price of $330 million, this equates to 6.6 times adjusted EBITDA. Sonoco has a history of acquiring companies that are tightly focused on manufacturing specialty products and RTS Packaging, supplier of fiber-based partitions, fit the bill.

Ennis, a diversified producer of printing products sold via the wholesale/trade only model to print distributors, acquired School Photo Marketing in Morganville, New Jersey. In addition to the staple product sold to schools, yearbooks, the acquired company provides a plethora of products to schools, sports photographers, and photo labs, including pocket folders, calendars, and personalized student ID cards.

Ennis serves its end user customers via the print distributorship channel. This dedication to the trade sales channel arose naturally from Ennis’ origins as a printer of business forms, which traditionally relied on print brokers to reach the great number of potential customers using forms. School Photo Marketing fits the bill for Ennis, a well-defined market served by known repeat-order products sold via third-party independent reps. Specialized, to be sure.

If you have been a reader of The Target Report over the past couple of years, you know that the market for label printing companies has been hot, on fire you might say. Recently, it seems to have cooled off, at least a bit. We may be reaching the point where many of the most desirable candidates have been acquired, and we will see more roll-ups of the roll-ups (see Packaging Industry Consolidation in Every Direction – July 2021). We also have begun to see the acquisition of more specialized subsets within the more generalized label printing segment.

Resource Label, one of the more aggressive consolidators in the label printing business, acquired Scentisphere. Based in New York State, the acquired company produces scented varnishes and coatings marketed to printers and brand managers. In turn, the scented coatings are used to manufacture a wide range of products including labels, free-standing inserts, magazine inserts, point-of-purchase displays, and promotional products.

The acquisition of Scentisphere, which is not your typical prime label printing company, is a bit of a left-hand turn for Resource Label. Now backed by its third private equity owner, Ares Management, Resource Label has completed twenty-six acquisitions, almost all of them label printers, not suppliers to the printing trade (see Private Equity Fuel$ Consolidation of Label Industry – September 2021).

This latest acquisition comes right on the heels of Resource Label’s announcement last month of another acquisition that breaks the mold, that of MedLit Solutions, which is hardly a label printing company, rather the acquired company is focused on pharmaceutical packaging, inserts, outserts, marketing collateral, kitting, fulfillment, and mailing.

It appears that both acquisitions provide value from specialization, either via a highly developed niche application (scents) or from focus on a specific industry vertical (MedLit).

Other notable November deals in which the depth of specialization played a significant role included the acquisition of Jondo (photo products and canvas wall décor) by Circle Graphics with backing by H.I.G. Capital; the purchase of Foiltech (decorating foils) by Infinity Foils, a division of UEI Group; and Banyan Software’s deal to acquire Innovatum (highly specialized label technology for regulated products).

There will certainly be more transactions forthcoming in the general commercial printing segment, as well as interest in companies that have successfully executed on the concept of one-stop shopping for marketing production services. However, in the present inflationary market with fears of looming recession, specialization appears to be the driving force supporting current M&A strategies.

* SupremeX, in addition to its envelope business, has developed a secondary specialty in the packaging segment, primarily the production of folding cartons, including the acquisition of Indianapolis-based Vista Graphic Communications. Graphic Arts Advisors, publisher of The Target Report, served as exclusive advisors to Vista Graphic Communications in the transaction.) 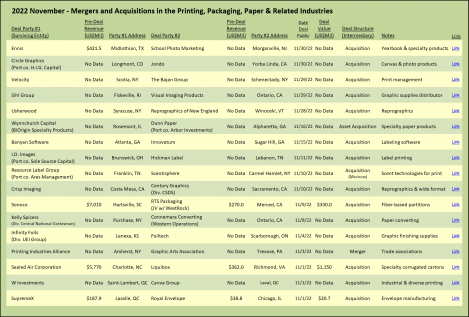