Led by Three Sisters, Premier Press Is a One-Stop Shop Committed to Sustainability

One glance at the cover of this month’s Printing Impressions—depicting Jodi Krohn, Juli Cordill and Joni Feryn, owners of Portland, Oregon-based Premier Press—could easily prompt the reaction, “How about that...three female executives.”

Fair enough. While this magazine has chronicled companies featuring women operating in the corner office, the rarity of a trio guiding one firm is certainly noteworthy, albeit no longer rare. However, there is a truly compelling story to be found here about a remarkable commercial printing establishment that continues to grow and evolve, to serve its customers with solutions rather than equipment, that acts as an environmental custodian in the scenic Northwest, and is a shining example of a firm that continuously strives to be a single-source solution.

That’s the CliffsNotes version of Premier Press, a G7 Master qualified printer founded in 1974 by Arnold and Dee Wheeler and now led by their aforementioned daughters. A more granular peek behind the scenes underscores the company’s commitment to being a one-stop shop for its clientele.

Premier Press offers a staggering menu of sheetfed offset, cutsheet digital and wide-format digital output, along with letterpress, full binding and mailing, warehousing, fulfillment and distribution. Foil stamping, die making and embossing have been fertile added value growth areas, as well. Its creative and project management teams help usher along the marketing campaigns and initiatives of some of the nation’s heaviest hitters, including retail, footwear and apparel, health care, sporting goods and insurance spaces.

The acquisition of a Zünd cutter has provided more finishing capacity for jobs output in Premier’s wide-format department.

The company, which is projected to post roughly $26 million in sales this year backed by 135 employees, relies on an assortment of technology providers. They include Komori Lithrones (two-, six- and eight-color machines, two of which are 40˝) for its sheetfed offset needs; two HP Indigo 7500 presses for digital work; plus two HP Latex printers (104˝ and 126˝) and a six-color Durst Rho 800 Presto UV model for handling wide- and grand-format digital output.

“Offset still represents the biggest portion of what we do, but it is shrinking,” Krohn notes. “Digital is growing, and the fastest area is our wide- and grand-format printing. All of them play an integral role in what we’re doing, and a lot of times we’ll use a mixture of all these processes. Our clients care about color matching and consistency, and we meet their deadlines for creative and sophisticated work.”

The flexibility to perform cradle-through-delivery services has earned the company a one-stop shop distinction. A hard-bound book might be produced via offset, cutsheet digital and wide-format printing, and Premier Press’ ability to handle all production modes enables the completion of a job that ordinarily could take several weeks to be turned in seven days. Toss in a garden salad of foil stamping, embossing, raised/textured coatings and spot UV, and you have a compelling single-source solution.

A cross-section of the book, marketing materials and packaging work produced by Premier Press underscores the diversity of its projects.

“We’ll tackle anything,” Krohn points out. “We brainstorm with clients on the creative process. We get a lot of experimental projects and do testing for clients. Premier Press is not an inflexible company that insists on doing things its way. We’re open to input. Our goal is to make customers stand out in the marketplace.”

One of the downfalls of growing into a one-stop shop is growing out of your old facility; in this case, two facilities several miles apart in Portland. One of the plants was located in the city’s upscale Pearl District, which is attractive to creatives and artistic types, and Premier Press was one of the last printers in that area. And while creative clients are enamored with the presses and the smell of ink, the Pearl wasn’t an atmosphere conducive to pitching corporate accounts.

Once Premier Press put its Pearl warehouse on the market, it was snapped up in short order. A couple of months later, the company secured newer, larger accommodations in the Swan Island section of the city in October of 2014. The building was gutted and remodeled, and Premier Press moved in this past May. It is leasing nearly 150,000 square feet of the 350,000-square-foot facility, which leaves ample room for growth. 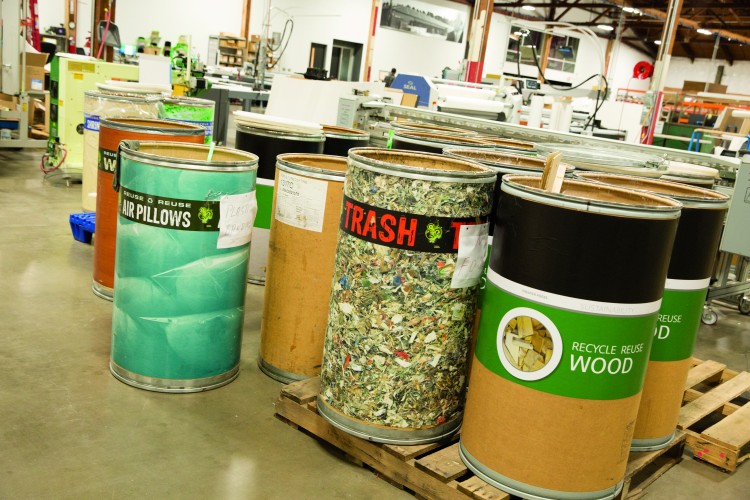 Underscoring the adage of “everything has its place, and there’s a place for everything,” Premier takes great care in the proper disposal of items.

According to Juli Cordill, COO, the expanded space enabled Premier Press to reconstruct its workflows to provide for more efficient production. The shop’s creative director—who boasts a background in architecture and space planning—helped orchestrate the new space, with impressive stairways and a grand viewing area. A creative library, large boardroom and an outdoor eating area are among the other amenities.

While the company has only been in its new digs for a few months, the benefits are readily apparent. “We now have more truck-loading area, more office space and we’re located right next to FedEx,” says Joni Feryn. “Everyone loves it here; employees have their own parking. And parking in the Pearl was a nightmare. Previously, our distribution center was separate from our manufacturing plant. We have gone a long way toward better efficiency to have everything and everyone under one roof.”

“We also needed room for new project managers, which we couldn’t have done at the Pearl location. We were getting choked with the space we had before,” adds Cordill.

The new location also enabled Premier Press to beef up its equipment arsenal, adding capacity depth with the acquisition of the HP Latex 300 printer, as well as a Zünd and a Fotoba cutter for wide-format digital finishing redundancy and faster throughput.

Moving forward, the company is pondering silk screen printing. Krohn said company representatives did some homework on the technology while attending GRAPH EXPO 15 and believes there could be a fit. The same goes for ancillary coating equipment that could enable Premier Press to employ various techniques.

Although the company has only been in its new facility since last May, Premier is already reaping many workflow benefits.

Environmental stewardship has long been of vital importance to Premier Press. The firm is certified by Sustainable Green Printing (SGP) Partnership and the Forest Stewardship Council (FSC). Krohn has spent nearly two years serving on the board of SGP.

Chip Chipman, the head purchasing manager of Premier Press, leads the company’s in-house sustaintability team, a group of employees representing all departments throughout the company focused on identifying and improving sustainable practices. Chipman is also a representative of Two Sides, an environmental organization promoting sustainability nationwide.

Opting for environmentally friendly practices speaks to the culture of not only Premier Press, but the Portland area as well. “There’s an intrinsic value to it,” Krohn explains. “The culture is innate for our team, so it comes natural to seek ways to do things better and more responsibly.”

Separating materials is no small matter for a printer that uses numerous production techniques and a wide variety of substrates. One of the more fun self-policing projects Premier Press employed was a dumpster dive. Over the course of a weekend, employee teams put on white suits and went through the company’s garbage to see how proficient Premier was at separating materials. The company scored in the high 90s, according to Krohn.

While wide-format digital output will continue to garner more share in the future, Krohn still sees demand for an integrated mix of production processes, even if litho printing is no longer the golden child. Quality and prompt turnarounds go hand-in-hand with Premier Press’ passion for sustainable practices.

“We’re always looking for ways to do things better,” she says. “We have a system in place where our sales and production people continually give input to our executive team. We’ve got a finger on what’s working and what we want to improve upon. Efficiency is reviewed on a daily basis.

“We do a lot of research to figure out the optimal way to produce the best product possible and not just get us by with something that’s passable. Our clients expect and really appreciate that.” PI