The Sustainable Green Printing Partnership (SGP), the leading authority in sustainability certification for the printing industry, announced today Christopher Rose of Shutterfly and Blake Pace of Primex Plastics as the first Sustainability Champions.

The SGP Sustainability Champion program recognizes SGP Community Members for outstanding efforts in making the environment a better place to work and live. An SGP Sustainability Champion is committed to positive change, shows passion through leadership, and exemplifies environmental stewardship and activism. Champions look beyond immediate, short-term goals and are committed to making an impact in a larger context. 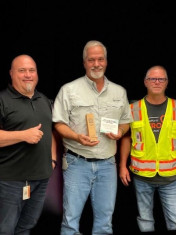 Chris Rose of Shutterfly was nominated by several people, recognizing his work in achieving SGP certification for its Fort Mill, SC facility. "Chris Rose took up the cause for sustainability almost two years ago. He was excited about the challenge of receiving SGP certification, knowing it would take considerable time and effort," said John C. Hindman, Senior Manager for Environmental Health & Safety at Shutterfly. "Throughout the process, Chris became very adept at pulling a team together and utilizing all company resources available to him along with SGP telephone consultations, the SGP Impact Tracker and website. Even as our internal EHS resources shifted significant attention to combatting the global pandemic and keeping our employees and partners safe, Chris carried the torch toward SGP certification, which we were able to attain in November 2020. While this initiative involved numerous people on the Shutterfly team, the effort would never have culminated in certification without Chris' monumental drive in leading the work and pulling the right team and resources together." 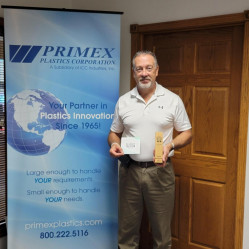 Blake Pace is the general manager of the Primex Plastics Reedsburg, WI facility. "Blake is a firm believer in responsible manufacturing. Along with renewable energy usage, environmental efforts emphasize energy and efficiency audits, reuse and rework of pallet and packaging materials and proactive freight considerations," said Teri Benning, Primex Plastics in her nomination submission of Blake. "Among many of Blake`s sustainability programs, he assisted in the implementation of smart lighting programs throughout his plant, updating lighting to LED and adding sensors in many locations so that lighting is automatically adjusted based on occupancy. For many years Blake has aided several customers with methods and resources to deal with their plastic waste which has resulted in thousands of pounds of plastic waste staying out of the landfills. He has also implemented policies and procedures to divert hundreds of thousands of pounds of internal reclaim annually from the waste stream. Blake’s strong voice relative to sustainability is apparent in the fact that the president of Primex named him as the chairperson of Primex’s Sustainability Committee. In addition, Blake believes in actively participating in community events including sponsoring Reedsburg’s Concerts in the Park, fundraising for the local nursing home and giving back to our local EMS, Fire and Police Departments."