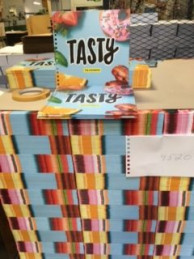 Cases for the front cover. Images courtesy of Superior Packaging.

Chances are, you've seen a Tasty video. Buzzfeed's wildly popular videos featuring easy-to-make recipes are not only featured on Buzzfeed's homepage, they're frequently featured on Facebook users' feeds. With more than 77 million likes on the Tasty Facebook page, it's easy to see why, according to Fast Company, Buzzfeed says that 50% of all Americans see a Tasty video every month.

Although the videos receive tens of millions of views, fans were desperate for a printed version of the quick-fix foodie tutorials. However, Fast Company reports that Tasty did not want to release one printed version for every taste, mainly due to the fact that when users experience the videos on Facebook they're experiencing them through an algorithm; videos catered to the tastes of you and your friends. So, since the digital version is so customized, the company decided to come up with a way to customize the cookbooks. For $35, the cookbooks are printed on demand with more than 100,000 different combinations. 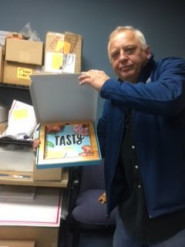 Users simply need to visit Tasty — The Cookbook to choose the types of recipes they're most interested in and the seven most popular recipes in that section will be selected for the final printed product.

Buzzfeed contacted Donny Charlebois to partner with his Braintree, Mass.-based Superior Packaging and Finishing — which, despite its name, is a packaging plant that offers a variety of services including bookbinding, diecutting, foil stamping and fulfillment — to print and package the cookbooks. Printing Impressions spoke with Jim Stanley, senior VP at Superior, who explained that Superior originally committed to producing 5,000 of the custom cookbooks, but has now surpassed 100,000 orders in the six weeks since the project's inception. 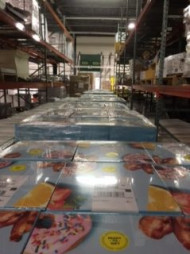 Superior started by printing the wraps for the cases and box wraps for the shippers and then mounted them, diecut and assembled the shippers and packaging. The unique cookbooks are then printed on an HP Indigo 10000 using 20x29˝ 100-lb. stain stock, wire bound and hand-placed in the boxes. The cover is printed and then finished with an MGI spot raised polymer on the Tasty logo.

Printing Perspective - It's refreshing to see the demand for a printed version of an exclusively digital brand. Buzzfeed does cater more toward millennials; however Tasty content crosses generational lines, more-so than the 90s pop culture references, evolving tech and the like that can be found on the majority of Buzzfeed's website. Cookbooks happen to be a medium that lend themselves well to print, with colorful imagery of the prepared food and sometimes step-by-step instructions. Cookbooks also have had some big play this year — like Chrissy Teigen's Cravings cookbook, which has been huge on social and is on the NYT best sellers list in Food and Diet Books and has been since it came out early in 2016. Tasty is a brilliant way to meld social media content and print in a timely way.

Wire-O! And Other Mechanical Binding

Christmas In the Bindery