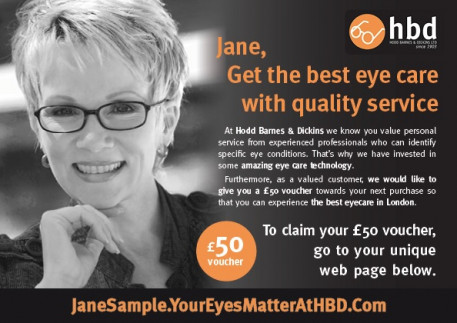 Money talks, and this optician’s voucher enticement on eye wear helped generate a return on investment of 500 percent.

Bringing Customers Back in Focus

Background: Founded in 1903, Hodd Barnes and Dickins is one of the oldest independent opticians serving the professional community in London with the most suitable eyewear for their needs.

Campaign Objective: As a large portion of the optician’s client base consists of people who work within close proximity in London, many tend not to return when they later obtain employment outside of the city. HBD wanted to target those lapsed clients by engaging them with an enticing offer that would bring them back to the practice.

In addition to bringing back past clients and increasing foot traffic, HBD hoped to increase the average spend per customer and garner information for future marketing activities.

Target Audience: It consisted of roughly 1,500 lapsed clients from the optician’s database who had not visited the practice since 2012.

Structure and Components: UK-based d2rCrossMedia developed a campaign for the optician consisting of a personalized direct mailer with a PURL, which directed to FirstLast.YourEyesMatterAtHBD.com. Personalized emails were sent to follow up with customers.

The list of 1,500 lapsed clients was broken into four segments: male under 40, male over 40, female under 40, female over 40. Each of the target groups were assigned different messages on the direct mail pieces, the PURLs and the emails. As an enticement to go online to the PURL, customers were offered a £50 voucher, redeemable on their next visit to HBD.

The direct mail piece was an A5 postcard sent in a brightly colored envelope to increase open rates. The postcard had imagery and copy relevant to one of the four target groups and included the PURL. Once on the landing page, visitors were treated to a video describing the optician’s eye care services. The next Web page gleaned information from the customer — possible sight problems, sporting activities needs, updating personal information, etc. Upon completion, a Thank You page displayed — which included a link to HBD’s static website — and the discount voucher was emailed.

Alert emails were sent to HBD when someone hit the landing page and another when someone claimed a voucher. That enabled staff at the optician to do a follow-up call and book the client into an eye exam.

Customers who didn’t visit the landing page received an email reminder several days following the initial direct mailer, with another email going out three weeks later reminding them of the voucher offer. The emails featured engaging subject lines such as “What do you do 14,280 times per day?” and “Do you know which body organ can’t be transplanted?”

Results: HBD saw 122 unique visits to its landing page (8.26 percent). A total of 56 people downloaded a £50 voucher to redeem for eye care, a 3.79 percent response. HBD also reported revenue in excess of £20,000 from the first sales as a direct result of the campaign, which represents a return on investment of 500 percent. That figure will increase further when the lifetime value of the clients is taken into account. PI

Why You Should Never Knock Off Another Designer