MAHWAH, N.J. — November 2, 2016 — In a time of minimal growth in the printing industry, Starnet Business Solutions of northern New Jersey has enacted strategic practices that flag it as one of the fastest growing printers in its region. 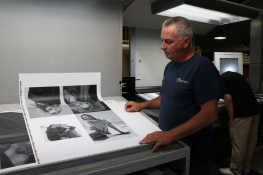 The 20-year-old company serves a diverse array of clients in a variety of verticals, with especially strong footholds in the pharmaceutical, automotive, fashion and insurance markets. It draws ample customers from the nearby New York City metropolitan area, as well as from surrounding New Jersey businesses and beyond.

Starnet sets itself apart from other operations by offering a full gamut of creative and production services in-house — from photography, graphic design and packaging ideation through pre-press, printing, die-cutting, finishing, mailing and fulfillment – and it keeps customers happy by serving as a one-stop shop for their various commercial printing needs.

Because its workflow doesn’t rely on subcontractors to complete orders, Starnet’s clients enjoy incredibly fast turnaround times, consistently high product quality, and competitive pricing – and they expect all three with every project they bring in. 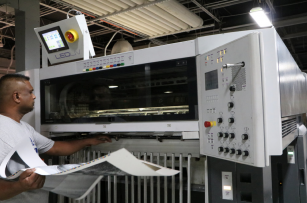 A Starnet press-team member pulls a dry sheet off of the press for checking.

“Because our clients have such high standards, we’re always looking for ways to improve in terms of customer service and operational efficiency,” comments Doug Arbolino, president of Starnet. “I know that if we don’t, our competitors will.”

Keeping in line with this focus, the company recently added a 40˝ Heidelberg Speedmaster perfector (set up for six colors, coatings and varnish) to its arsenal, which it was able to acquire used. The only downside of the purchase, Arbolino explains, was that the machine came with known marking issues.

To avoid this problem, Starnet decided to retrofit the press with two XP9 LED-UV units from Air Motion Systems.

“I knew that in addition to eliminating potential marking problems, AMS’s LED UV curing system offered us a better overall way of printing,” Arbolino says. “It would let us produce even higher-quality product, offer even faster turnarounds, and take advantage of instantly dry sheets that could be sent straight from the press to the bindery.” 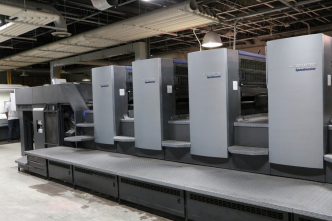 One challenge that Starnet’s team expected to face with the transition to the AMS LED-UV system was that of learning to use LED inks. However, Starnet press operator John Cullen noted that he was surprised to find that most “horror stories” he had heard about making the switch proved decidedly untrue.

“I’d heard horror stories about working with LED inks,” Cullen says, “but in reality, we’ve found them to be a lot easier to use – the opposite of what we expected.”

Cullen said that the end-of-day cleanup process he was used to – removing ink from the press and trying to save it, washing the press, going through piles of rags while wiping down components – is no longer necessary with LED inks, and this saves his team time every day. 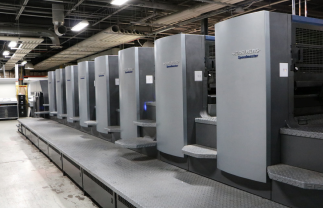 The second LED UV lamp from AMS, installed mid-press on the 40" Heidelberg, can be seen above.

Arbolino added that bringing the Air Motion Systems LED UV setup to its operations has expanded Starnet’s product offerings as well. The company now can print on plastics and other nonporous substrates, and thus offers new items like static clings to customers, which have grown popular quickly.

Air Motion Systems’ Barry Walsh noted that the Starnet installation is an exciting one for the industry, as it serves as an example of how the evolution of AMS’s LED UV curing solutions can fix problems that have historically plagued sheetfed offset perfecting setups.

“Starnet is a great example of how we can reduce marking, improve quality, and speed up turnaround time on a long perfector,” Walsh says, adding that he expects a large contingent of forward-thinking printers to refresh existing presses in the coming years, to remain competitive within their markets.

Noting his excitement about the Starnet installation, AMS President Steve Metcalf spoke to the general evolution of LED curing for  and its current capabilities, reiterating how far they have come in recent years.

“Four years ago, we could use LED UV to cure on paper. Now it can cure ink on virtually any substrate, and brings numerous cost-saving benefits to sheetfed setups,” he sums up. “Press refreshes like this one are going to become a must-do in the industry, for those who want to successfully compete and grow.”