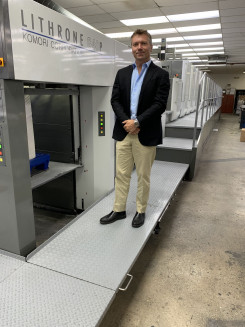 With the recent addition of a new facility in Miami, Florida, the company has doubled in size and is one of Florida’s largest printing companies. This growth challenged Southeastern Printing to take a holistic approach to processes within its operation and look for ways to achieve new efficiencies in both print facilities.

“When it comes to ensuring the future of any printing company, it is critical to invest in the latest technology or you will be left behind,” said Don Mader, CEO of Southeastern Printing. “We knew it was time for a new press for a number of reasons. We wanted to increase our speed to market to meet our clients’ increasingly tight deadlines. From a sustainability standpoint, it was important to reduce our energy consumption. Finding qualified labor to run the presses is yet another critical issue every printer faces today. The bottom line is that we knew we weren’t saving money by keeping our older presses in operation because they were actually causing unnecessary costs and waste.”

The decision to move forward with Komori’s perfecting technology was made easier by Southeastern Printing’s involvement in a national peer group. Several other companies within the peer group had already installed the GL840P and were reporting significant efficiencies. While the company was taking a strong look at other manufacturers, Mader was able to see first-hand the success of Komori’s technology within his peer group, which was a key influence in his decision.

Mader reports the GL840P answered the company’s quest for faster turnaround, reduced energy consumption and improved staff utilization. With the GL840P’s ability to produce two-sided printing in one pass and the addition of LED UV inks that cure almost instantly, overall production cycle time is significantly shortened, as is energy consumption. The advanced technology of the Komori GL840P now does the work of three presses, allowing Southeastern to streamline labor. “It’s all about doing more with less,” states Mader. The company runs the GL840P 24 hours a day, six days a week, replacing the competitive presses that were operating five days a week over two shifts.

“Southeastern Printing is known for producing exceptional, award-winning work, so we are very excited the company chose the GL840P over our competitors,” said Mark Milbourn, vice president of sales at Komori America. “We are confident the GL840P will answer their overall efficiency requirements, as well as add to the quality of every piece the company produces.”