Is Your Finishing Up to the Short-Run Digital Challenge?

"We’re experiencing a Renaissance of print.” That is what Sabine Lenz, founder of PaperSpecs, told an audience at the recent Dscoop conference in Orlando, Fla. Designers, brands and consumers are all returning to print, but they are looking for more than the generic postcards, flyers or banners than in the past. Digital printing is driving a creative push for unique, stand-out pieces that are as personal and individualized as the people receiving them. But smart commercial printers aren’t just stopping at the paper stock or the use of variable data — they are looking for finishing options that stand out as much as the rest of the process.

Creating a tactile experience with finishing can be accomplished in a number of ways, from diecutting unique shapes, to using complex and innovative folds, to a wide range of coatings and embellishments that can change the feel of a piece in a myriad of ways — and that’s just the start. Traditional finishing equipment was designed to match the offset presses they were paired with in order to create the same end result thousands of times. However, various manufacturers are now offering equipment specifically designed for the short-run, variable data world.

One commercial printer embracing the ability to push the limits with finishing is Norman, Okla.-based StoneHouse Marketing, which recently installed a Scodix Ultra Pro 2 digital enhancement press with foiling system, as well as a Rollem diecutter and Kompac UV coater. StoneHouse produces some packaging, along with loyalty cards for brands and the direct mail campaigns that go along with loyalty campaigns. StoneHouse operates five HP Indigo digital presses.

While the loyalty cards themselves are produced with true variable data, the direct mail campaigns that go with them tend to be more versioned, Brian Mortensen, VP of sales and marketing, explains. For example, depending on the state, there might be a different football team highlighted. “It could be a national campaign, but digital allows us to [send regionally focused pieces],” he says. Finishing those pieces requires a combination of techniques, with coatings, diecutting and foiling being used to ensure that the recipient wants to pick it up and open it.

Another commercial printer embracing finishing for its HP Indigo digital presses and Accuriojet KM-1 UV inkjet press is Long Island City, N.Y.-based Influence Graphics, which has built a reputation on being able to turn short-run work around quickly and profitably. “That’s what makes us different,” Ron Sizemore, partner at Influence Graphics, notes.

“We do a fair number of small jobs, and have it down to a science. We can make money on lots of small jobs; we are very proficient at getting them in and out quickly.” 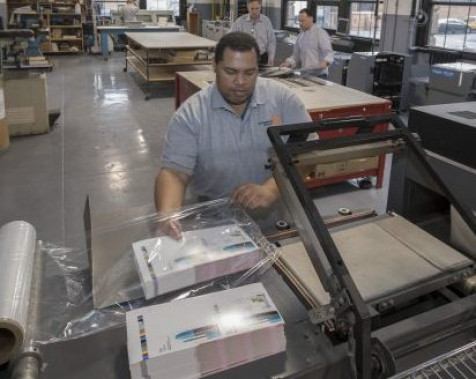 In the foreground, Anselmo Garcia operates a shrink wrap machine in the finishing department to help protect printed materials produced at Influence Graphics.

Booklet-making is one area Sizemore believes the finishing must be able to keep up with the digital presses. He notes that everything coming off the digital presses has to first be cut to size, and then it is sent to one of several binding machines, depending on the type of binding required. That said, one thing Sizemore reveals the company had to contend with early on when it comes to finishing print from digital presses is that the creasing process is very different from traditional offset inks.

“If the paper is not creased properly, the inks can crack,” Sizemore says. “We crease everything that comes off our digital presses with a machine designed for digital work before it goes to folding. We do it as a separate step, and we also make sure we use papers that crease and fold really well.”

The Challenge of Diverse Product Mixes

Both StoneHouse Marketing and Influence Graphics keep their digital finishing lines off-line, rather than in-line, due to the wide variety of work produced. While there are a few shops that specialize in just one or two products, other commercial printers may find themselves running 500 postcards in the morning, 1,000 booklets in the afternoon and then 200 direct mail packets at the end of the day, for example. The size, shape and content is always shifting, making it impossible to have dedicated finishing in-line with their digital presses.

That said, speed is one challenge for the finishing department. Work coming off of digital presses often needs to be turned quickly, meaning equipment designed for longer runs — which can take time and operator attention to set up and monitor — is impractical.

Influence Graphics has tackled that problem through automation. “We are always looking at ways we can automate or semi-automate job functions and finishing functions,” Sizemore says.

For example, he decided to purchase a new perfect binding machine that uses PUR glue, which is strong enough to allow Influence Graphics to eliminate an extra stitching step. That, in turn, allows the shop to turn those jobs around faster, and customers are happier with the end result.

“We are constantly looking for equipment that can cut the labor out of the finishing [process],” he adds.

One surprise that Sizemore wasn’t expecting as the shop began doing more digital work was that, while the quality coming off the press was great, they quickly found that the inks can be more prone to scratching or scuffing as they move through finishing. The company purchased a UV coater to protect those pieces, although he does note that as UV ink technologies have improved, the shop has been able to stop using the off-line coater on work coming off its newest digital UV inkjet press.

At StoneHouse, one of the challenges is knowing when it makes sense to bring new finishing equipment in-house, versus not offering that specific finish or outsourcing it. “When I see the volume from our current customers increasing, that’s when we start laying it out,” says Mortensen,

He also notes that one of the challenges with keeping up with finishing for digital printing is the fact that the market is speeding up, with more brands beginning to take advantage of what can be done with the presses. “Commercial print was boring and uncreative for the longest time,” Mortensen says. “But now that digital pricing is comparable to offset, customers are starting to take advantage of it.”

In fact, Mortensen believes that as the popularity of digital printing continues to grow, the level of detail when it comes to finishing requirements and embellishments will grow as well. “It’s going to continue to get more complex as people become more creative.” The trick, he notes, is for shops to be open-minded, and not limit themselves or put themselves in a corner. “Understand that the market will continue to evolve and change, and you have to evolve and change with it,” he says.

Digital technologies are making print innovative and exciting for brands and consumers alike. Pairing the power of digital printing with the right finishing equipment can help take a printed piece from being interesting to extraordinary. Brands and marketers are beginning to recognize the power of these tactile experiences. As a result, the commercial printers that have the equipment and expertise to execute even the most creative of visions will find themselves in high demand.