Short-Run Digital Jobs Must Be Finished With a Flourish

Digital technologies have been steadily transforming the printing industry during the past decade. To date, much of the innovation has centered around the presses — better quality, faster speeds, more bells and whistles. But as more jobs are moved to the digital platform, the finishing side of the business necessitated an evolution as well.

More commercial printers are looking to add digital departments to supplement the work they can do on their offset presses. Ranging from toner- and inkjet-based digital presses designed for jobs, such as variable data booklets, to grand-format presses to create stunning billboards and other large pieces. No matter what type of digital work commercial printers are looking to add, there is one thing they all have in common — they quickly realize the need for quick-turnaround finishing capabilities to handle those jobs.

Brad Phinny, COO of Slate Group based in Lubbock, Texas, notes that when his firm made the decision to add digital presses to its mix, it realized fairly quickly that it would also need to invest in finishing equipment that was designed specifically to handle short-run jobs. “We felt like we wanted to use the right tool for the right job,” he says. To that end, the company actually invested in several pieces that, Phinny notes, essentially meant creating a brand new, separate in-house finishing department specifically for their digital work. 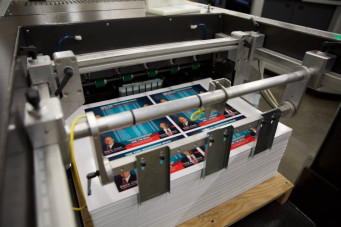 The need for finishing equipment dedicated to the digital side of the house is something that Christopher Burnley, CEO of Hayward, Calif.-based Corefact, found as well. For him, it came down to sheet size, with his digital presses outputting work that either required him to divide up components to finish separately, or to upgrade his finishing department. “It was inefficient to have to bust the sheet first,” he says, “so we’ve been upgrading the equipment.”

Just having a separate finishing department with dedicated devices isn’t enough to overcome all of the potential challenges.

Paul Loy, VP of operations at Sheridan, which has facilities in Pennsylvania, Michigan and New Hampshire, points out that the challenges with finishing digital jobs start before the presses even fire up. Because most work done on these presses is short-run — sometimes with variable components — it’s important to group similar jobs and/or to minimize the overall offerings to keep the finishing aspects.

Dave Matheu, the digital department manager at Sandy Alexander Orlando, points out that substrate choice is another challenge they have to be aware of. “Sometimes, we’ll look at choosing different stocks that will fold or bind better,” he says, to prevent the job from being too thick to finish. The Orlando, Fla.-based facility has also experienced some issues with UV coatings and toner-based sheets, with the heat from the coating devices reactivating the toner and causing the sheets to stick together.

To overcome that, Matheu notes, they had to come up with a different process, printing one side, coating it, then printing and coating the other side. “That way when it’s going through the coater, it’s either a virgin sheet or already coated,” he explains. Doing it that way is a bit slower, Matheu adds, but it is still a faster turnaround time overall compared to their offset process.

Another challenge many shops might not consider is the training aspect. Burnley notes that one problem he has run into is that each piece of digital finishing equipment in his shop often requires specific training, and finding skilled operators can be difficult. “A lot of people don’t want to do light manufacturing, particularly young folks,” he says. “So finding people to staff these positions is our greatest challenge. On the equipment side, there aren't too many challenges there — it works well — it’s finding the people to do the work.”

He notes that one way they tried to get around that problem was to do more finishing in-line, but found it actually slowed operations down, rather than solving the underlying issue. So instead, they have focused more on providing incentives for people to come work in their finishing department, such as increased wages and more flexible shift schedules.

According to Phinny, the Slate Group got around the staffing issue by cross-training their existing finishing staff on the digital equipment, allowing them to move between the conventional offset and digital sides of the finishing house. He notes that in-line finishing proved to cause more issues than it would solve, due to all of the different specialty items and products offered by the shop. “It’s better for us to send the jobs to different locations for finishing, rather than relegating one piece of equipment to one process,” Phinny says.

Matheu points out that when it comes to running digital jobs, one thing commercial printers should keep in mind is the sequence. While not a challenge, per se, he notes that by running various components of a job through finishing so they end up in the right order, shops can save themselves quite a bit of time.

“If you’re printing something with a sequence, the order it gets printed in becomes more important,” he says. “Planning can save a lot of time down the road.”

Loy notes it’s important for commercial printers to educate their customers exactly what effects digital finishing can bring to the table. “Customers want anything and everything, and it can be challenging to help them understand that in this ultra-short-run world, everything that was done for the long-run jobs can’t be done here,” he says. “As a printer, you have to figure out what you are willing to do with your [existing] workflows and equipment to not only serve your customers, but, at the end of the day, post a profit.” 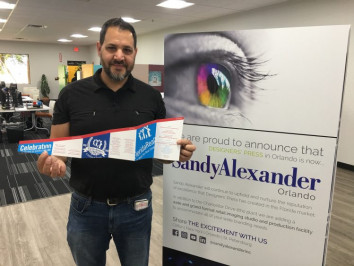 That said, Jason Leonard, director of business development for Sandy Alexander Orlando, notes that one advantage commercial printers bring to the table is the ability to leverage their offset finishing equipment when the situation warrants it. For example, in the wide-format space, he notes that it “gives us a wealth of equipment a wide-format company doesn’t have.”

The unique ability of a commercial printer, with an established finishing department, to cross over jobs provides a powerful value proposition that dedicated digital operations just can’t offer, according to Leonard. Having the right tools to do the bulk of the short-run work, along with a willingness to experiment with offset finishing options, makes finishing in the digital realm far less intimidating — and far more lucrative — than commercial printers might have expected.

Finishing has evolved to meet the varied demands of on-demand digital printing, and it will only continue down this path.  Manufacturers will continue to develop a wider range of higher-speed finishing options, accommodating shorter runs and wider sheets, with more features than ever before. For any commercial printer hesitating to jump into digital printing because of uncertainty around the finishing aspect, there has never been a better time than now to jump in feet first.