Selling the Value of Digital

Digital printing was the linchpin in this International Minute Press franchise’s success story, as it gave the company the power to have clients rethink how they approach their marketing while saving money and improving results.
Facebook Facebook Twitter Twitter LinkedIn LinkedIn Email Email 0 Comments Comments 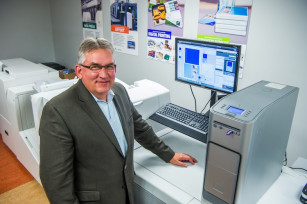 The move into printing had all the potential to be a growing profit center when he started offering it three years ago with the opening of an International Minute Press franchise. His current customers showed consistent interest, and Mann had structured his print offering around an efficient, just-in-time inventory of digital printing that would help his base of large industrial corporations reduce their costs when compared with a wasteful and costly offset print fulfillment requiring unnecessarily high print volumes.

The business was selling more variable data printing work, increasing workflow demands. Plus, production operations for commonly produced products like tabbed binders did not have the amount of automation needed to handle growing volumes.

“I started our promotional products business, Lasting Image Inc., 26 years ago,” Mann says. “About three years ago, one of our large clients in the commercial battery business asked us if we could warehouse their printing, and we said no. But after they asked a couple more times, we realized that if we didn’t add printing to our portfolio of services, we were likely to lose the promotional products business to someone else who could do both.”

That client got more than its money’s worth by partnering with Mann for its printing. By moving from offset to print-on-demand, Mann was able to reduce the inventory value by 34%, reduce the amount of inventory destroyed due to obsolescence by 71% and reduce the overall amount of inventory by 45%. And according to Mann, “we are continually driving ourselves to improve those percentages to further save the client money.”

Digital printing was the linchpin in this International Minute Press franchise’s success story, as it gave the company the power to have clients rethink how they approach their marketing while saving money and improving results. But having consistent, high-quality printing with a growing volume of orders is an important part of the equation.

“Brand management is key for our clients,” Mann explains. “A customer might have 500 SKUs and they all need to match. We were spending hours trying to get colors to match. We believed in the print-on-demand model and knew there had to be a better solution out there.” 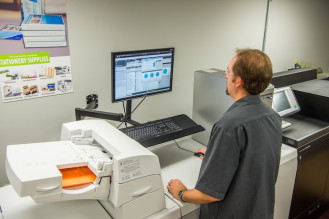 The Fiery workflow at the International Minute Press franchise includes Fiery JobMaster, a makeready tool that reduces job preparation times and last-minute corrections by enabling users to do document composition and content editing operations, including reducing the steps required to design and add tabbed dividers to jobs.

Those features, along with Fiery color imaging capabilities, helped ensure exceptional results for customers. “It made a huge difference in our business,” he says. It is similarly transformative for Mann’s customers, who are now getting better-quality printing with shorter turnaround times and fewer mistakes, even on complex jobs.

A medical device company the International Minute Press franchise serves is a good example of the value Mann and his team offer. Mann could tell from the beginning that the medical device company could benefit from a robust digital printing operation: the client had 500 SKUs and more than a dozen color palettes that had to match exactly.

“The challenge here was selling the print-on-demand concept,” he points out. “The company was buying 10,000 brochures for $200 more than I offered them for 1,000 units. I explained to them that with 500 SKUs, reducing $200 in spend on 500 SKUs equals $100,000, but it does not end there. If they were to print the extra 9,000 pieces that were not needed just because it was only slightly more to print them, they would have additional warehouse costs as well.”

These coupled savings — printing less and having less in inventory — reduce costs and add to the company’s bottom line. Managing the right amount of inventory takes a system that Mann built in 2012 to manage cost-cutting. He believes that technology is the thrust of today’s business environment. Properly managed inventory can save hundreds of thousands of dollars over a two- to three-year period, more or less depending on the size of the company and how its print is being managed. Many times, customers just guess at a quantity or rely on quantity savings when, in reality, they are overspending.

“Our system helps customers manage their spend better,” says Mann. “And then, on top of that, when customers stop buying more than they need for no reason, they have the ability to make frequent changes in their marketing pieces with little waste. Plus there is the risk of inventory obsolescence.”

The printing operation goes to great lengths to save its customers money and avoid waste. Obsolescence, costly as it can be, is the type of problem that can be caused by “something as simple as a trademark symbol being changed to a registered trademark symbol,” he explains. 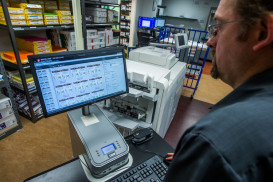 With the major boost in production capability provided by the Fiery workflow and Canon presses, the franchise can really back up what it promises. “We’ve committed to saving the medical device company 41% on storage fees annually and reducing its inventory by 67% over the next three years,” Mann notes, “and we are on track to do so. We have certainly improved quality compared with what the offset company had in their warehouse when we took it over.”

With the Fiery-driven front ends for its Canon digital presses, International Minute Press has seen many other benefits in addition to cost savings and color fidelity for its clients, including:

“With Fiery, everything is faster,” Mann explains. Plus, it meets his company’s high standards. “I am a quality-oriented guy,” he says. “I will stop a press on a dime if the quality isn’t there. I have seen customers who have used several different printing companies see the variation in quality between multiple suppliers. In many cases, those customers have consolidated all of their work with us because of the quality and efficiency of our offerings.”