Sales were slow. Very slow. The salesman sat at his desk and festered. He was frustrated by his lack of results and wondered what he was doing wrong. “Well,” he thought to himself, “there’s only one thing I can do: I’m going fishing!”

So, in the middle of the day, the salesman grabbed his rod and reel and headed for his favorite lake. Rowing out to the middle, he cast his line and waited ....and he waited ... and he waited.

After several hours of not so much as a nibble, and despite the fact that he tried several different spots at the lake, he pulled his line in and prepared to leave. “Just my luck,” he said. “Nothing’s biting here either.” And with that, he grabbed the oars. But just before he could put them in the water, he heard a voice.

“How’s it going?” the voice asked.

Looking around, the salesman saw nothing. “Down here,” came the voice again. Glancing over the side of the boat into the water, the salesman could not believe his eyes. The voice he heard was coming from a turtle. A turtle! 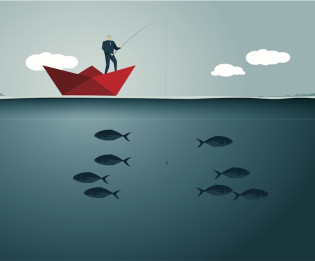 “W-Who are you?” the salesman asked.

“I’m from Marketing,” replied the turtle. “I’m here to help. Think of me as FEMA for the water. I saw that you were not having any luck catching anything so I thought maybe I could be of assistance. What exactly do you need? I mean, without opposable thumbs the options are limited, but I do have certain magical powers that could make your job easier. Name it.”

The salesman thought about it for a second and said, “I know the fish are down there. Other fishermen around me are pulling them in left and right. I’ve got an entire tackle box full of lures and bait. There are so many different kinds of fish and I’m not sure which one to use.”

“We in Marketing feel your pain. Let’s have a look,” said the turtle. Peeking over the boat’s edge and into the tackle box, he said, “That first one. It looks overused. Is that your favorite?”

“Yes. That’s the one that I generally start out with,” said the fisherman. “It’s the ‘I am the cheapest’ lure. Every once in a while I have some luck with it but the fish I catch is not the best of quality, so I typically end up throwing it back. Still, it’s the easiest one to use.”

“Well,” said the turtle, “we need to change that thinking right away. Any fish that nibbles on that one is probably a waste of your time. How about a different tactic? Let’s use a little marketing magic and see if that doesn’t change the outcome.”

“Marketing magic?” repeated the fisherman. “What is that and how could it help?”

“Marketing stocks the pond,” said the turtle. It helps to create an environment where the fish are more attracted to the bait on your hook. For example, my suggestion is that we tell stories. Let’s fill the surrounding waters with tales of what you have done for other fish. We can use YouTube and PowerPoint to paint a picture in order to make your approach better understood, so that when you cast your line the fish are more likely to at least look your way. This is a simple and mostly free solution.”

Looking again into the tackle box, the turtle said, “What about that one? The new one that’s still in the packaging? That looks completely untouched and untried. Explain.”

“Oh,” said the fisherman, “I went to a fishing seminar given by this really tall fishing instructor. He suggested that if I study the fish and learn more about what their challenges are before I throw my line in the water, I won’t need a hook at all. He claims the fish will just jump into the boat. I’ve never used it because it’s not a technique that I’m comfortable with.”

“Marketing agrees with him,” said the turtle. “We believe that’s the single most important skill that a fisherman can have. Another important step is to build your personal brand. That is, let’s show those fish that you know what you’re talking about. To do that, what if we created some white papers that discussed the kinds of solutions that fish are looking for? By offering them in your name, we can say, ‘I know what you’re going through. I understand your issues. I’ve solved them for others. Here, read all about it.’ We could even collect their contact information so that you know exactly where in the lake they are in order to go directly to them. You might also think about writing a blog. It may be a lot of content creation, but it’s a good way to build a name for yourself.” 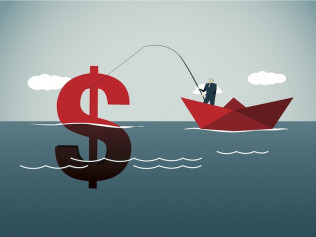 The salesman thought for a moment and then said, “These are all great ideas, but we need to get them in front of the fish. They’re of no help if they’re not seen.”

“Good point,” agreed the turtle. “Any and all articles and content that we create can be posted on LinkedIn. Oh, and let’s make sure these videos and white papers are available through your website.”

“Hold on a second,” said a confused fisherman. “Fish have computers and access to websites?”

“In this column they do, yes,” answered the turtle. “But I digress ...

“Listen,” he continued, “effective marketing tells a story. Your story. Who are you? What value do you bring as a fisherman? What differentiates you from others who do what you do. Surely, yours is not the only line being cast out there. Done effectively, there are two benefits. First, your bait will get noticed. The second should be your Holy Grail. This happens when a fish is so impressed that he asks you to help with his own fishing challenges. After all, a fish has to eat, too. That’s as good as it gets.”

“Turtles that can talk. Fish with computer access. Cheap lures. Solutions-based lures. This is all a bit hard to believe and certainly overwhelming,” said an astonished fisherman. “But I’ll take all the help that I can get.”

“Happy to help,” said the turtle. “But remember, marketing takes time. That’s why Bill cast me as a turtle and not a dolphin. It’s a slow and steady process.”

As the turtle slipped back into the water, the fisherman returned to land and headed back to the office. Sitting at his desk, he relayed the events of his adventure to a coworker. “Sounds like a fishy story, if you ask me,” the other sales rep replied, “but if marketing helps you to land a fish, imagine what it could do for your sales.”